Exploring the possibility of turning the attic of our 100-year-old house into a living space. I knew the joists were only 2x6 and would need to be strengthened through interlacing. But when I pulled up some floor boards at the edge, I found that the joists are not sitting on a top plate, but are instead face nailed to the wall studs about 18" below the plate: 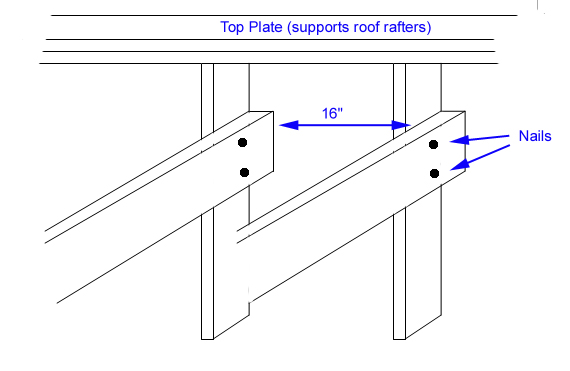 The lathe-and-plaster walls are attached to the studs and the underside of these joists. There is one wall in the house below that is a bit off center on the span that I've never considered to be load-bearing.

Now I can't imagine any code-compliant way to add the necessary support for live loads without putting the new joists on top of the plate and losing 18" of height (which would make the room too small). Any bright ideas out there?

One old technique that might work here is the “let in ribbon” or “cut in ribband”. This traditional method was used in “balloon framing”. Before the wide adaptation of “platform framing” with the advent of air conditioning - there was no top plate to rest your joist on. This still meets code if done properly:

R502.6 Bearing. The ends of each joist beam or girder shall have not less than 1.5" of bearing on wood or metal and not less than 3" on masonry or concrete except where supported on a 1x4 ribbon strip and nailed to the adjacent stud or by the use of approved joist hangers.

In balloon framing walls were hollow and allowed the hot air within to rise to the attic. Acting as a chimney, along with plaster walls retaining the cooler evening temperatures and typically much larger windows, balloon frames provided passive cooling but were also fire hazards.

A stub mortise is cut on interior facing edge of the studs just below the bottom of the joist. The joist passed over this ribbon and was nailed to the stud. The ribbon transferred the floor load to the stud. The ribbon itself was 5/8” x 10” to 1-1/2” x 6” nominally. Some retrofits used steel strips which were thin enough and secured with screws so as to avoid having to mortise the studs in place.

In your project, you could snap a chalk line around the wall, cut through the plaster and add the depth of the ribbon then chisel away the stud cavity, set the ribbon in and be left with an interesting molding opportunity. I have used steel stringer channel which is relatively lightweight and provides a flange for the joist to bear on. The channel can be painted and left exposed obviating the need for major plaster work.

There are many steel building hardware options. Simple joist hangers would do if you don't mind adding studs on the other side of each joist. I'd probably sister 2x10 or other suitable joists and use double hangers.

One other option might be to bolt a ledger to the wall under the joists, giving them bearing. You'd have to box it out or fur out the entire wall to conceal it.

I'd just have a conversation with your local inspector and see what (s)he'll be expecting and what options are available.

Not the answer you're looking for? Browse other questions tagged framing attic-conversion or ask your own question.

0
Do knee walls in an attic need blocking between studs at the top for drywall?
0
Removing a wall to the ceiling / roof
1
is this typical wall framing?
1
Resting joist hanger on top plate?
1
Removing a wall underneath joists that are already attached to beam in attic
4
Can I replace a window in a garage gable wall without adding a modern header?
2
Should window headers be set against the top plate or at rough opening height?
1
Drilling through bottom plate for conduit
0
Is this a load-bearing wall?