Is it normal for A/C performance to improve when vent covers are removed?

I recently moved my office to the second floor of our home and I haven't been able to get the temperature below about 78 even though the thermostat is on 72. My son's bedroom had been the same way until the other day when I removed his vent cover (diffuser) to paint the ceiling. Today I noticed his room was like a freezer, so I removed the vent cover in my office and now it is cool in here. Is this normal?

My vent cover is round and looks like this: 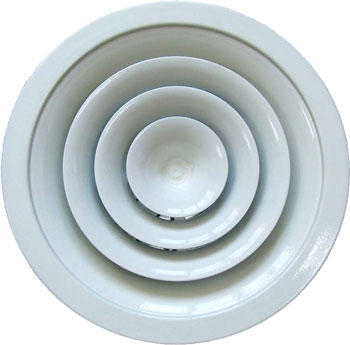 with the exception that mine only has two openings rather than three.

Here's my theory...when the diffuser is on, the cold air is mostly pushed out along the ceiling where the air is the hottest. This warms it up as soon as it comes out, before it has a chance to "fall" down to where I am. By removing the cover, the air is being pushed straight down, essentially cooling the air lower in the room rather than near the ceiling.

My cover is about 30 years old, so perhaps it is poorly designed?

And may make sense if you think about how the system is working...

While the A/C unit was blowing, the 30 year old vent covers were restricting the air flow from the ducts. So while the proper temperature was reached at the thermostat, not enough cool air was supplied to the other areas of the house. So the area near the thermostat may actually reach the proper temperature sooner, because that area had unrestricted air flow and received a bulk of the cool air.

To fix the problem you could try to balance the system yourself, or you could call in an HVAC company to balance it for you (which will likely include installing dampers and new vent covers).

4
Recommended proximity of HVAC vent to return air
2
Does an air return duct do anything when the air conditioning or furnace is not running?
4
Where should I tap in to the existing duct work?
8
How can I improve second floor HVAC performance?
0
HVAC not quite reaching the loft/attic floor of my apartment in an old home
1
Can I move warm air from 2nd floor to basement to help with heating?
0
Adding a return vent to a hot office
1
What is the purpose of these ducts in HVAC/laundry room ceiling?