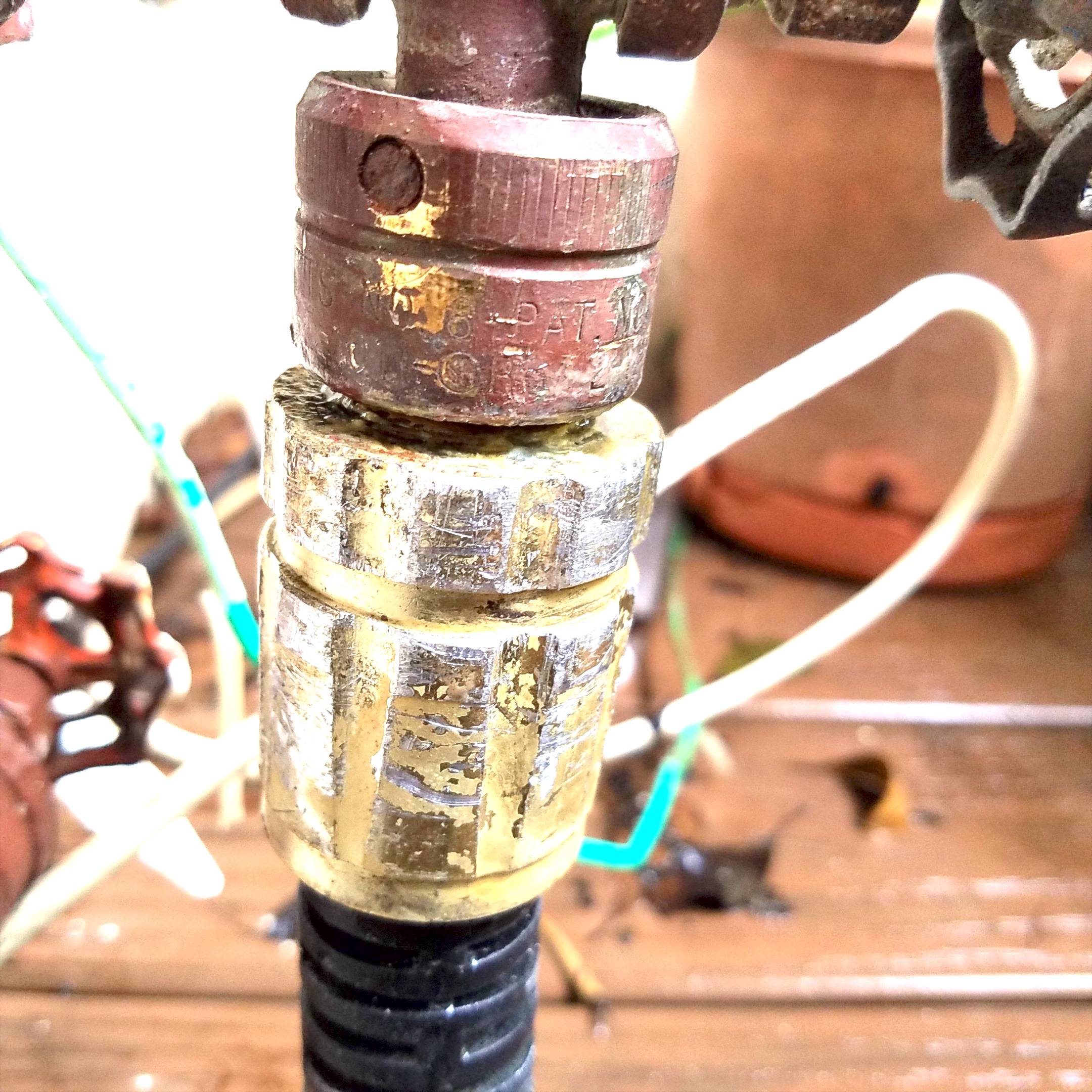 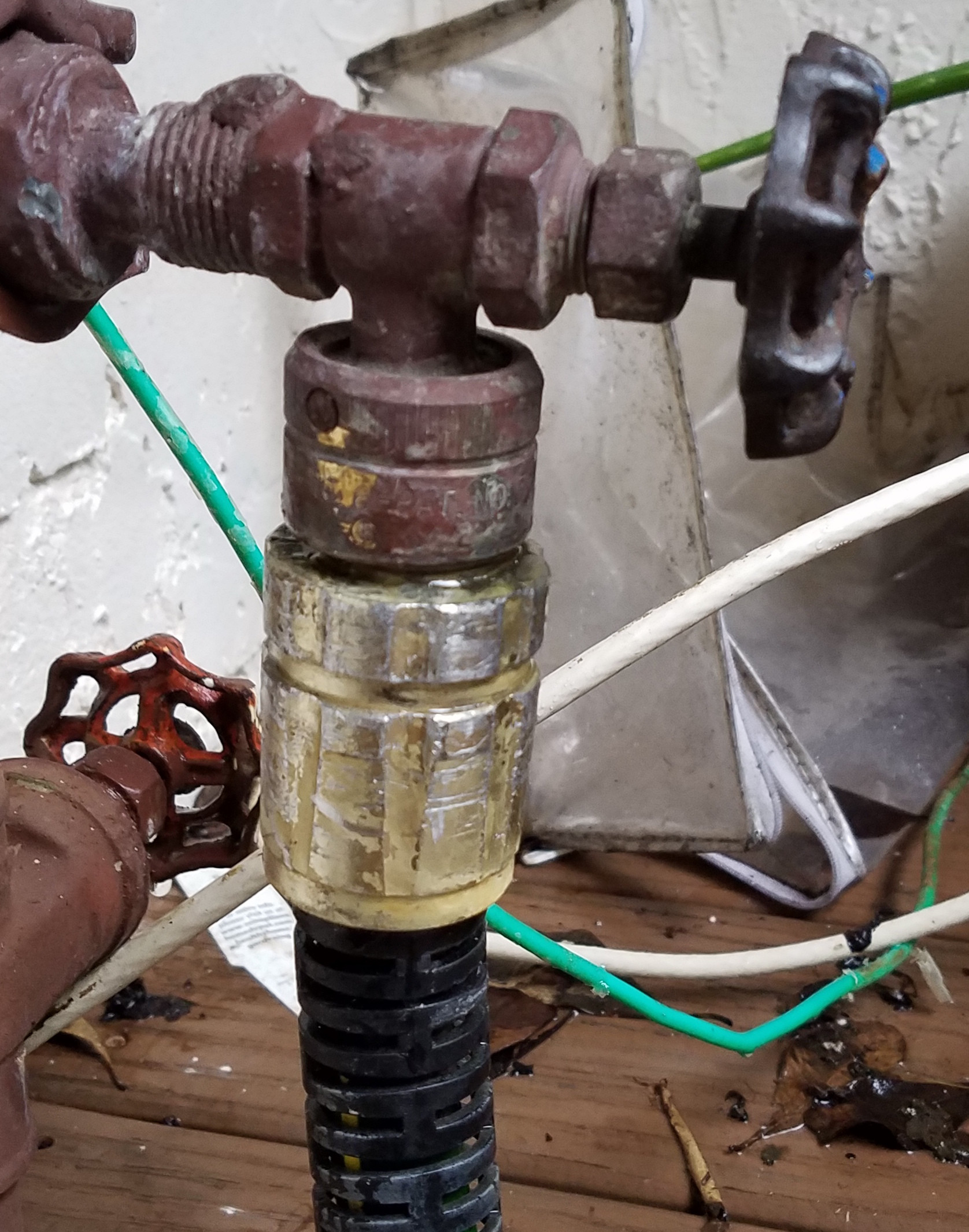 I am unable to remove my outdoor hose from the spigot faucet and think it may be cross-threaded. I am using a pipe wrench but the entire fitting just keeps turning. Do I need a plumber to remove it?

** IMPORTANT UPDATE: In order to prevent a DIY disaster, I had a plumber come out who immediately recommended replacing the entire pipe, valve and spigot at a cost of $175. Having received OUTSTANDING recommendations and informative comments from StackExchange contributors, I asked him to first attempt to use a dremel to cut a notch above the back-flow preventor pin on the hose bibb, and if necessary, slice the collar to peel it back at a cost of $75. This method took him 20 minutes, was totally successful, and saved me $100!
When finished, he inspected the cut pieces and informed me that the issue preventing removal of the hose was not due to cross-threading or stripped thread; but rather, the use of a hose connector made of aluminum on a brass hose bibb which causes corrosion due to dissimilar metals. ** PLUMBING 101: NEVER USE DISSIMILAR METAL FITTINGS ON PARTS INTENDED FOR FUTURE REMOVAL !! I have replaced the hose with one that has a brass fitting ;)

That's not a quick-disconnect. That is a backflow prevention device (aka vacuum breaker) between the faucet and the hose. It prevents your hose from becoming a water inlet point and introducing non-potable water into the municipal water system. An example of how that would happen is if a firetruck connects to your fire hydrant by your house and turns their water pump on and they suck more water out of the water main than it can supply. That causes a vacuum (negative pressure) in the water line and opening a kitchen faucet will just introduce air into the water main, but a garden hose that doesn't have one of these can introduce mud/fertilizer/pond water/etc. Other things can cause water to backflow, but that's the best example I can think of.

If your garden hose fitting is completely stuck, then I think it would be the next easiest to remove the backflow prevention device and replace it.

That is a set screw, but the set screw is designed to break off after tightening it to prevent a homeowner from inadvertently removing the device which would be against code in many places. The way to remove it is to grind a notch with a dremel tool in the top of the set screw, and then use a flat head screwdriver to back out the set screw.

It is very possible that you damaged the threads of your hose fitting by trying to unscrew this device without removing the set screw. If you remove the set screw and it still doesn't come off, then you'll probably need to replace the entire valve.

But if you're trying to avoid calling a plumber, the final thing I would try is grinding a vertical notch through either the entire backflow device or the entire garden hose fitting and literally split it apart into two pieces off of the threads. It might not work, but if you already have the dremel tool out it's worth a try. They're both made of brass, so it's soft and easy to cut with a hacksaw if that's all you have available too! 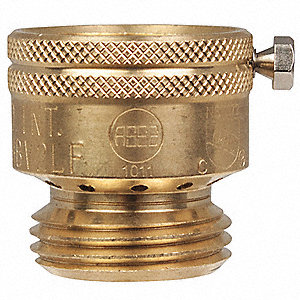 I think that's a quick-disconnect. The male fitting is permanently attached to the faucet, and the gold-colored aluminum part disconnects by pulling (sliding) the collar away from the faucet.

The "fitting" on the hose that is turning is just a cover. You can probably just cut the cover off, and then turn the actual fitting inside.

4
How to remove broken threaded water pipe
1
Going from a PVC Sched 40 1-1/2“ PIPE to a 1/2” Poly Combination Elbow
5
What is attached to this spigot and how to remove
0
Can I remove the water supply hose from this valve?
0
Can I screw a US garden hose into any standard threaded pipe?
2
Unable to remove push-pull stopper from tub drain
0
Where to place wrenches to remove hose bib
0
Remove adapter from hose Y connector
1
Can I attatch my garden hose to a hose bib on the water main?