I’m having carpet installed in a few days, so I’m going through and pulling up the carpet and pad to put in deck screws in the subfloor plywood where there are squeaks. So far going well, but there is one area where I can’t figure out how to stop the squeak for the life of me. It’s in a corner, between the entrance to the master bedroom and the entrance to the laundry room.

In the pic, at the bottom you can see arrows where the last known joist is; it runs left to right. Then there is a run of over 32” till the next joist, at the master entryway (where green and red pad meet). There are nails in the subfloor from the builder at 16” from the joist, but they don’t go into a joist, as I confirmed with several pilot holes (seen in pic with X). In fact, I drilled a hole every 3” between the last joist and the entryway trying to find a joist, but to no avail.

I drew an outline in the pic of where I can step and hear the squeak. There is a circle with “center” which is where the squeak is the loudest. I’ve placed screws in the master entryway joist, and at the corners near the walls, but no luck.

Any ideas on things to try? I’m really confused, and the abscence of a joist where the nails are has me puzzled. Normally the joists are spaced 24” apart in the area below where this pic is taken. 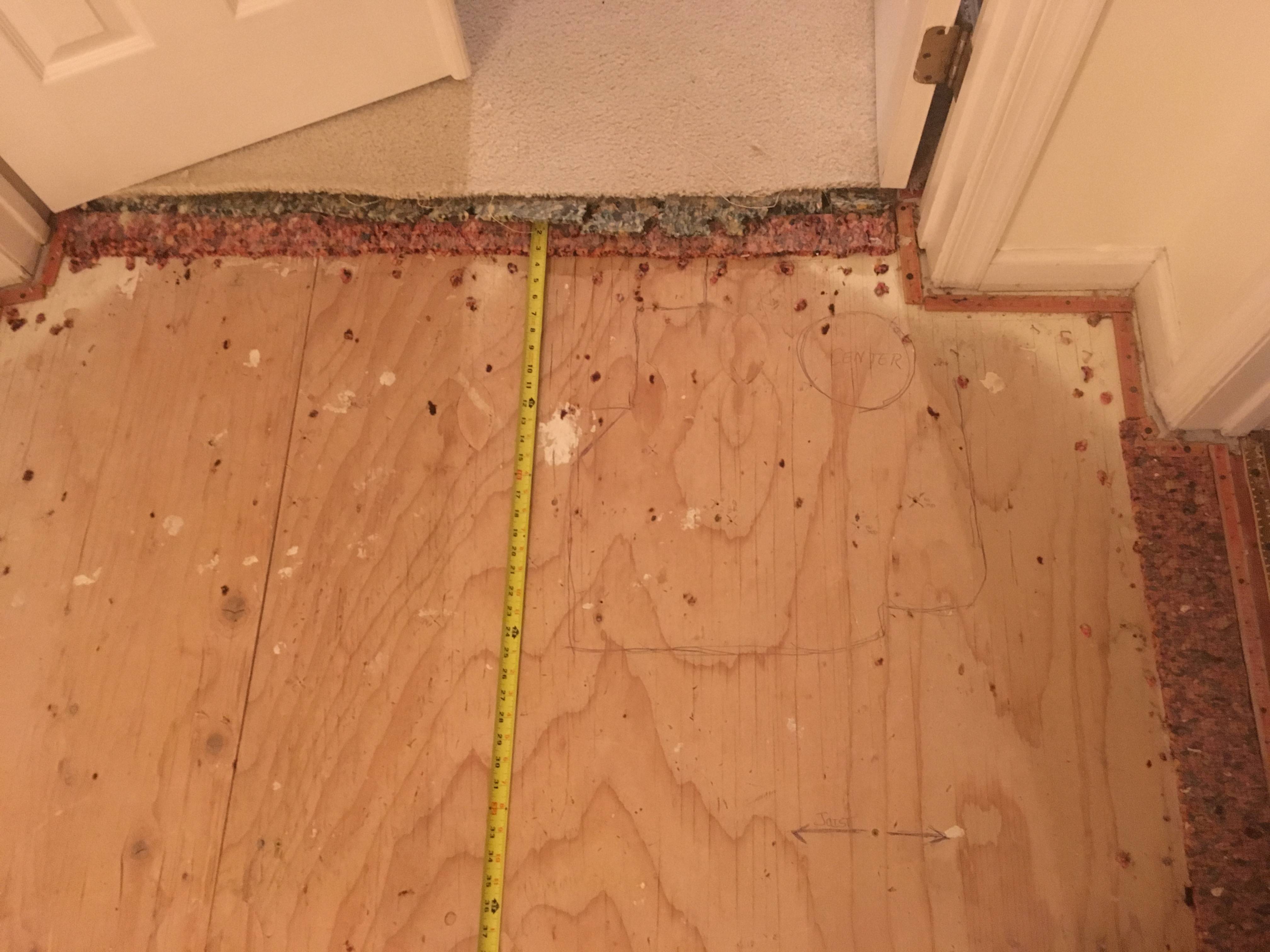 Two long for a comment, Fully agree with shims and glue. I wish they had Gorilla glue when I was building, that stuff works really well as it expands and then gets hard so for some areas that's all that may be needed. The wood needs to be dampened with water first for gorilla glue to work. I have used it on a 2 story home the owner did not want to open the first floor ceiling. I drilled through the floor in several places above the joists dribbled a few drops of water in the holes and once the water soaked in filled with glue, after the glue was dry I cut the tops of the holes where the glue expansion bubbled up. Worked great but you will need to find the joists. There should be a joists because 24" would be the max spacing. My only other guess would be a change in direction of the joists.

If you can figure the thickness of the subfloor, set a circular saw to that depth just enough to cut all the way through. Cut the subfloor out, keeping 6" away more or less, from the 2 walls. Remove the plywood, this will let you see what you need to see. Sometimes the framing changes direction and that can cause squeaks in the framing itself, sometimes it will squeak in the framing without the direction change. Shim and/or refasten as needed. 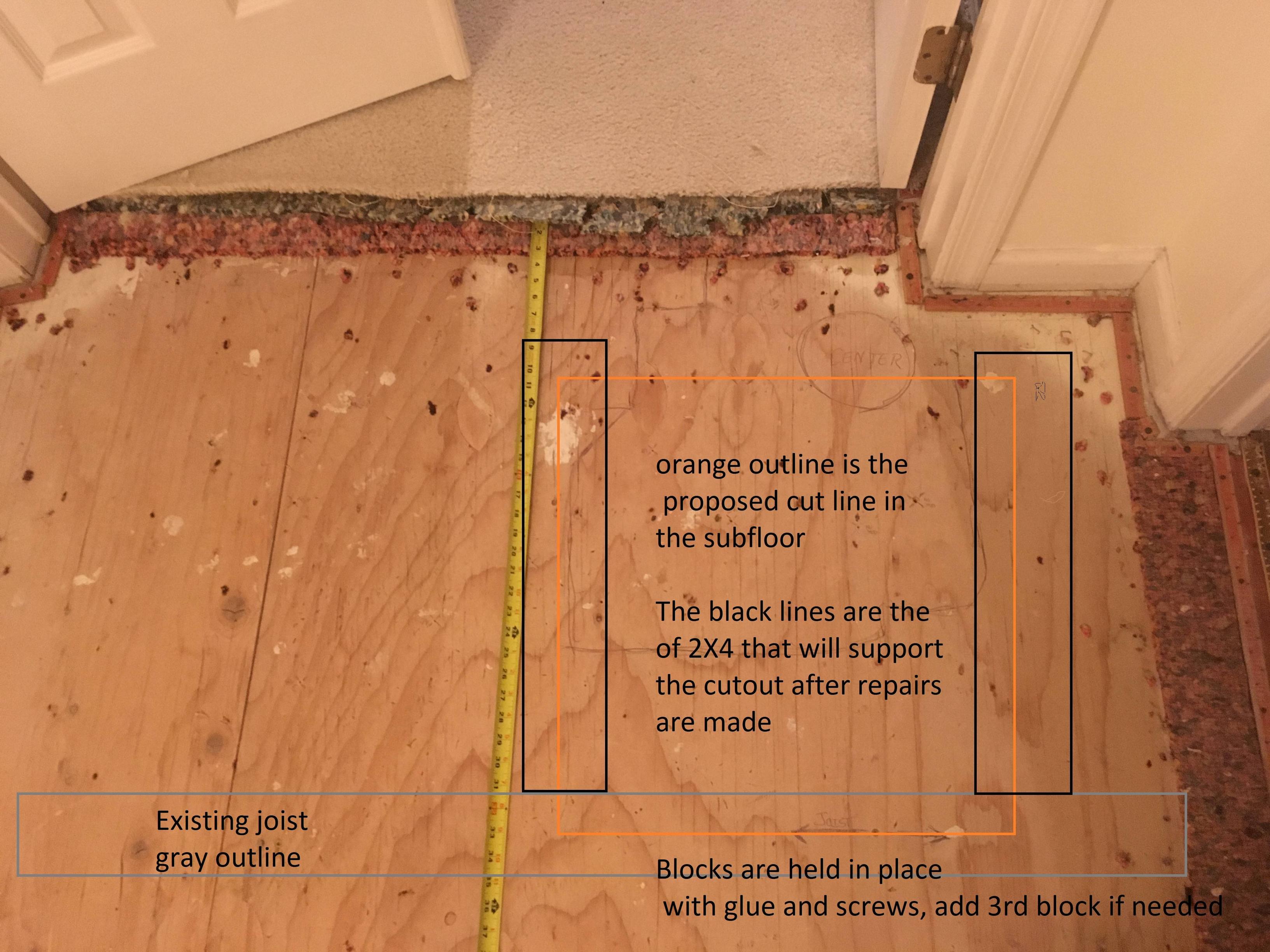 Not the answer you're looking for? Browse other questions tagged subfloor squeak or ask your own question.

0
Best approach for squeaky subfloor fix, with some water stains
0
How to Mate Old Subfloor with New Plywood?
1
How to resolve subfloor squeaking when screwing does not fix the problem?
2
Installing plywood over 1x6 subfloor in preparation for engineered hardwood
1
Subfloor and Batten Construction of 1950s Hardwood Floor
1
Subfloor hump over joist tied into cantilever