How to fix drawer runners

I have a set of drawers (custom made) that have draw runners which are attached to the bottom of each drawer on both sides. Unfortunately, the small plastic wheels on part that attaches to the housing has cracked on two of the three drawers (and on the same side, bizarrely). Neither drawer is overloaded nor even very heavy--a few kilos of weight max.

I can't see a way to replace just the wheels as they the part they fit onto wouldn't allow such a thing to be replaced and the only way to remove them would be to break them anyway! I was wondering if there was any way to repair these plastic wheels without replacing the entire mechanism, as this would be time consuming.

If the only way to repair the sliders is to completely replace them, are there any you can recommend that should be able to handle weight and daily usage?

I can only upload one photo, so here's the plastic wheel which had snapped in half. I've tried repairing it with super glue, but this is all that's left of it! 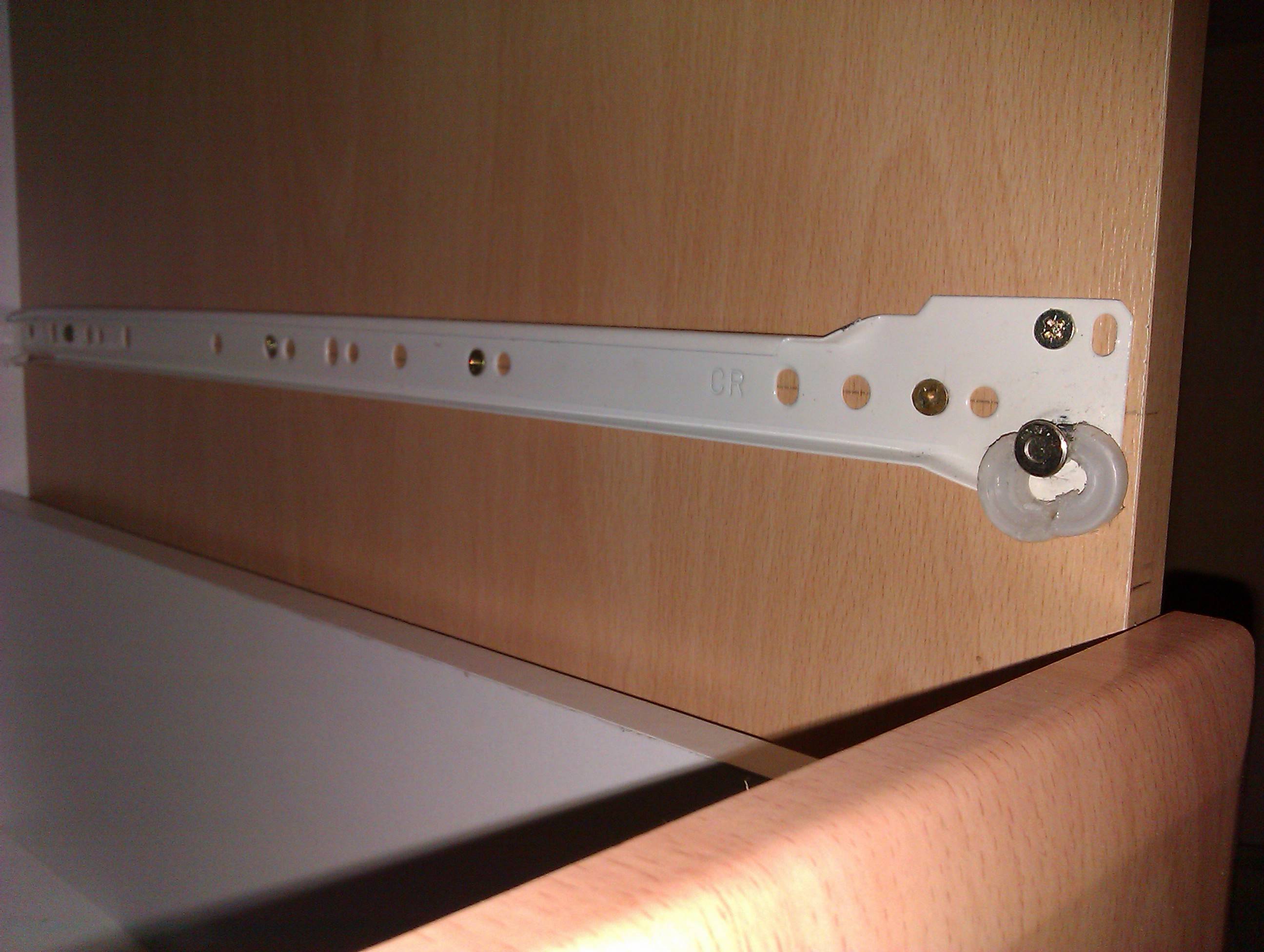 I have now replaced the runners with new ones that can take a load of up to 45Kg and they feel much smoother than the old ones ever did. Although I tried to re-use the old screws, I had to use the new screws provided to ensure that they were flush. Turns out that some of the old screws were not flush with the runners and this caused some rubbing on the wheels at the back of the drawers. They were pretty weak when I replaced them, but I was able to hear where the rubbing was happening and have rectified that problem. I also had to adjust the position as I think the first set of drawers that broke ended up resting on the next one which caused that one to break. I now have an even gap between the drawers and with a bit more care, hopefully they will last a lot longer!

I'm guessing these shattered because of shock or perhaps from being fully extended more than normal since the front wheel takes a lot of the weight when drawer is fully extended. The rail is acting as a lever where 10kg in the front of the drawer could easily be the equivalent of 100kg on that wheel when the drawer is fully open. The other thoughts are if someone where to lean on the drawer or if the cabinet was being moved and dropped.

I've seen replacement wheels, but they tend to be for specific rails/sliders, and I doubt you'd get a good result without a perfect match. For replacing the entire slider, I'd look for a replacement with a high weight limit. I've seen sliders in the US that are designed for 50kg, which I'm guessing would more than handle your load.

0
My Dresser Drawer is stuck closed

1
How do I reinforce a drawer bottom?
4
how to install drawer slides but are scraping against drawer?
1
Drawer too wide
0
How to remove drawer on old Accuride rails
0
Do these 60s kitchen drawers have narrower boxes than the faces?
0
Need help on how to remove dresser drawers!
0
Washing machine conditioner drawer no longer receives water; how to fix?
3
Sagging drawer bottom
0
What is the name of a part that is placed between drawer tracks and the cabinet wall for a narrower drawer?