How can I be sure there are no gas leaks around Gas Oven/Range Combo?

My wife was smelling gas around our gas oven/range combo, so I purchased some leak detection bubbles and a cheap gas sniffer. I soap tested everything visible around the flex line and this is what I found at the fitting between the gas line and regulator: 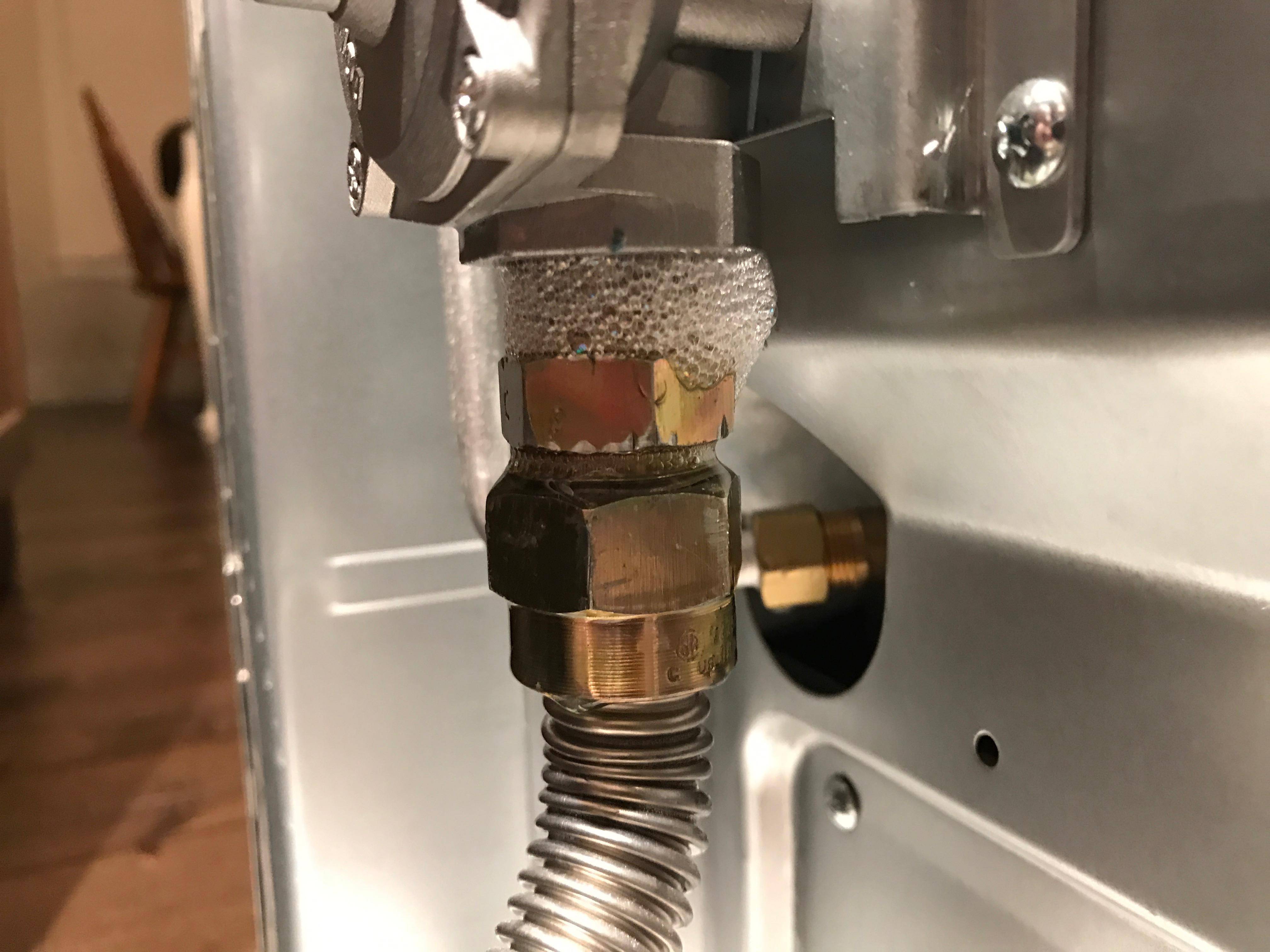 Turns out the person who installed the range didn't teflon tape between the regulator and the fitting, so I taped the joint and tightened everything back up. I did a second soap test and everything checked out.

But! The gas sniffer still detects gas around the oven, only when the gas is turned on. It doesn't detect gas anywhere else, even around other gas appliances in the house. I spoke with an appliance repair tech., who indicated there wasn't much he would do other than what I had already done. He suggested using a lighter to see if gas was getting to any of the burners and that he didn't think it was very likely that the regulator could be malfunctioning. He said if me or my wife keeps smelling gas, or if I detect gas at the burners when the oven is off, that he could make a service call but that he's very busy.

At this point I am wondering if the gas sniffer is just too unreliable and/or sensitive, and that the gas to the appliance is now safe. Every professional I've spoken with says they've found gas detectors to be unreliable, even with the more expensive devices.

The sniffer is an instrument that is used to detect gas in the area. Once that is determined it is always recommended to use the search bubbles for searching on the individual joints, and fittings. If you are looking for leaks around an appliance like an open cook stove, it is understood that you must calibrate the instrument to eliminate the background 'odors'. Background 'odors' surrounding this type of appliance are to be expected especially when cooking and working on the unit. If you have been away from the house for several hours and upon returning, you smell gas in the area, you know you have a problem.
You already knew you had a leak around the stove. The protocol would be to now use the bubbles on every field connected joint to the stove. You are on the right track. After making the repairs to the joints that made bubbles do a retest. If all joints pass with no bubbles you can expect safe operation. The sniffer at this point is out of its class. Additionally, should you see any additional joints that at not generously taped or doped, take them apart and tape or dope them. (flare joints excepted) (All the joints inside the range will have been factory tested and can be expected to be tight.)

Do a long term pressure drop test at 15 psi to verify if it's leaking or not. If it is leaking, the increased pressure also helps find the leaks easier when using soap.

Not the answer you're looking for? Browse other questions tagged gas oven stove natural-gas or ask your own question.

9
What could cause kerosene-like odor from a gas oven/range?
1
Very low pressure at the end of natural gas pipe
4
Gas stove whines/hums - is this a safety concern?
2
Oven won't light unless it's hot -- but it can clean!
1
Measuring Incoming Gas Pressure to Stove
0
Gas oven goes "Thup" every 5 to 30 minutes. What to do?
0
Gas Oven - Very Low Gas Flow
1
Natural gas range emits kerosene/propane burner odor