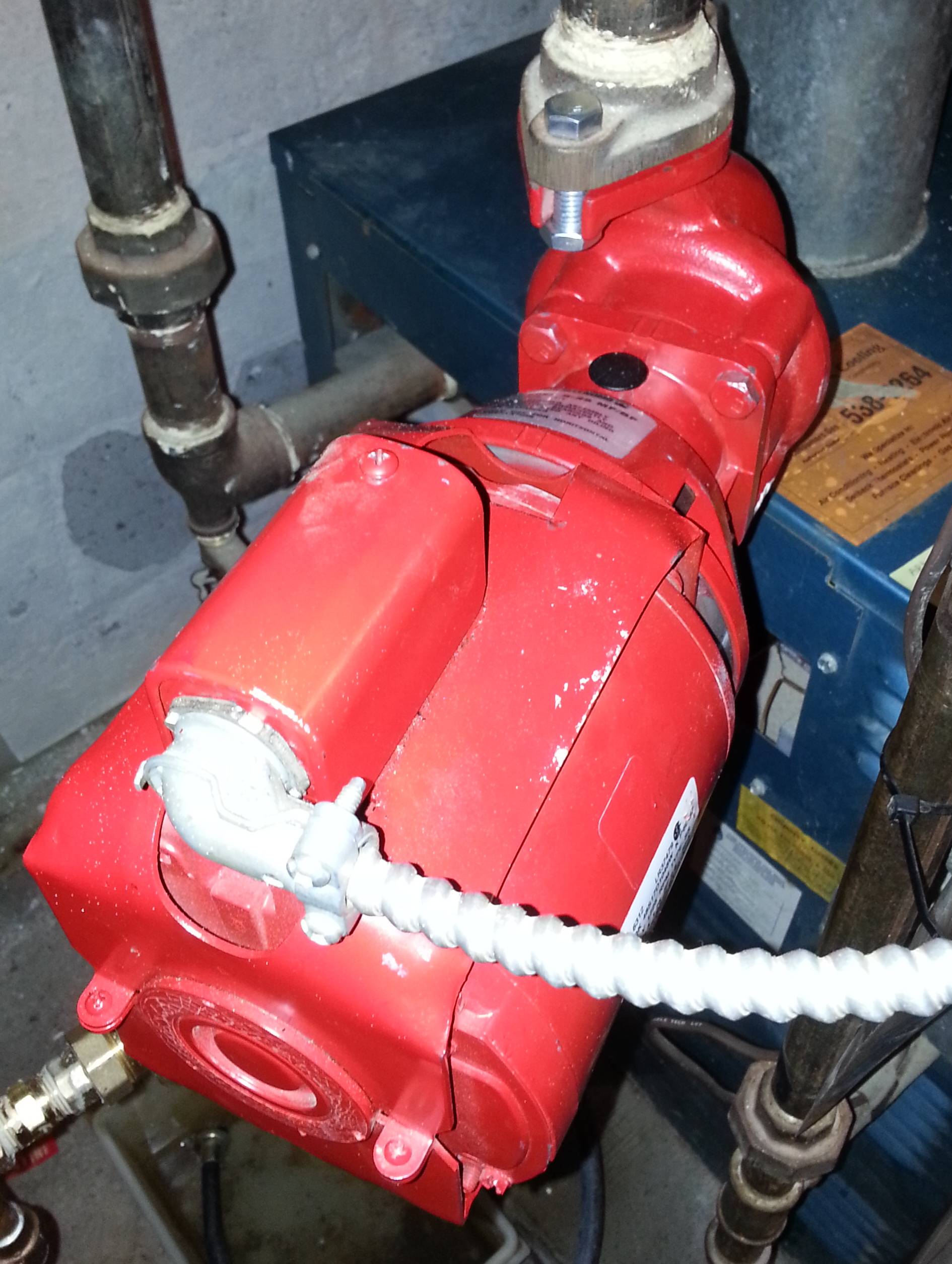 I have resonance in the heating system pipes. Touching the pipes near the boiler (natural gas) pump I can feel ever so slight vibration, most detectable by touching the pump motor.

Background: About a week ago I took advantage of warm weather to replace some components of my heating system (Raytherm 134 WT natural gas boiler, Armstrong S-25 pump with MF/BF bearing assembly, and motor - 1750 rpm). The components replaced:

Cold system pressure is 12PSI. Running pressure, after 1 week of bitterly cold sub-freezing temps, is just under 20 PSI, boiler temperature under 150F. The bearing assembly is about 2 months old (old one was leaking oil), the motor probably 30 yrs, but ran quietly before the updates). There is some very faint noise from around the pump/bearing/motor, but I can't determine which (the impeller?).

I don't recall there being any resonance / vibration prior to the above updates, I think it only appeared after weather changed to cold after the updates. Any ideas how to tacle this? Any adverse effects if I leave it be (other than the somewhat annoying resonance)?

UPDATE: The resonance is still on. I replaced the Armstrong S25 pump with a wet rotor 3-speed Bell & Gossett NRF25. The difference is that I now have absolutely no detectable vibration, and the pump is extremely quiet by comparison (with the armstrong I could hear the impeller through my rads, whereas to hear BG NRF25 I have to press my ear to the pump.)

After NRF25 installation (yesterday afternoon), and later before bedtime, I'd swear I heard no resonance. But some 12 hours later, the next morning, it's back on. The sound pitch changes depending on the pump speed selection. Low tone on speed 1, and higher pitches on speeds 2 and 3. Speed 3 also introduces water flow sounds into the system, and not surprisingly since it is faster than my furnace specs require, however I don't need it this fast, and run it at 1.

I purged the system of air. Have no vibrations. No hammering. No banging. Only the humming / resonance, and only on the ground floor and basement (where furnace and pump are located), no detectable sound on the second floor. The humming is somewhat similar to flourescent bulb running loud. I think, but only think, that it is present mostly at elbows where horizontal pipes in the basement turn to the vertical leading to ground floor rads. No hummming / resonance at furnace.

Where should I look next?

I suspect that you have a warrantee issue with the Armstrong pump. Sounds like yours has a bad bearing or out-of-balance coupler, it happens. Normally these pumps are quiet and reliable. I wouldn't let this slide. I suspect that the pump will experience a significantly shortened life if left in service. FYI, there is a new class of hydronic pump on the market today. I think it is superior to this type of pump. They are call 'Wet Rotor'circulators or 'wet rotor' pumps. They are actually quieter and more reliable than this style of pump. The cost is similar. And they experience fewer service issues. Most of the major manufacturers offer this new style. Taco makes a good one and Grundfos too, however all of the major manufacturers make good products.