How can I remove this dried drain cleaner from a kitchen sideboard?

I recently spent a week or so trying to unclog a seriously blocked kitchen sink drain. I tried various things, including One Shot Instant Drain Cleaner (a hardware-store 91% sulphuric acid drain cleaner).

My attempts all failed and eventually a plumber managed to solve the problem in about five minutes' flat with a glorified Henry Hoover...

Alas, I hadn't noticed at the time that I'd spilled a small amount of the cleaner on my sideboard. It's now dried into a thin layer of a cement-like material. Scraping it off with a screwdriver seems like it might eventually be successful, though after quite some time and I'm concerned about damaging the sideboard.

Is there a compound that I can use to just dissolve the dried drain cleaner, or at least convert it into some form that I can then clean up? Boiling water on its own doesn't seem to do anything at all. 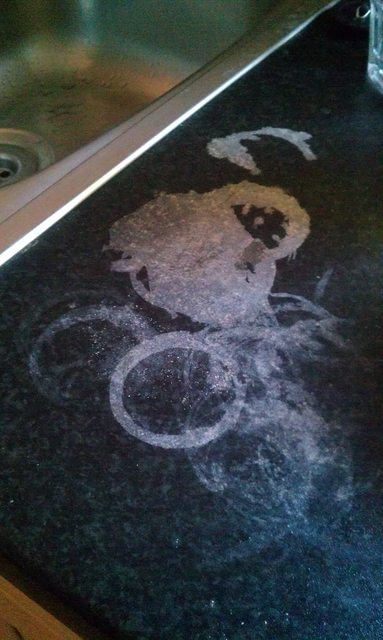 Put on good rubber gloves, preferably ones that are made for handling hazardous chemicals, and safety goggles.
Make a thick paste with a cup of baking soda and cold water and spread it over the area to neutralize the sulfuric acid. Even though it has dried it is still active. Let the paste sit for 10-15 minutes before touching it. You may want to open a nearby window as this can release a fair amount of CO2.

I can't tell from the picture if your counter top is a type of laminate or granite. If it is laminate you may find that the "cement-like material" is actually your counter top and the acid has melted it. If it is granite you may need to have the counter professionally polished to get rid of the stain.

Not the answer you're looking for? Browse other questions tagged plumbing drains or ask your own question.