Why is there a hot white wire in my ceiling light

I have two ceiling lights in my family room. Panel supply is in the ceiling to RIGHT LIGHT, with a runner down to the switch. There's a 14/3 wire running to the other, LEFT LIGHT, and the box is also used as a junction to run power further down the chain. 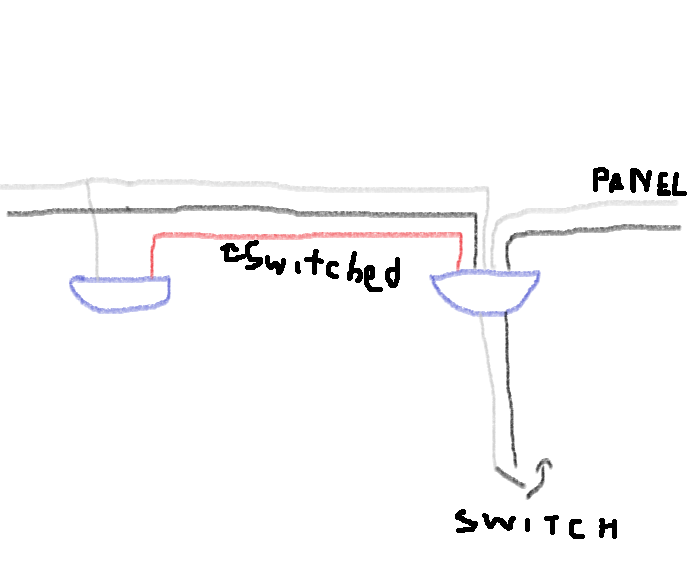 I recently took down the brick facade on my fireplace, and found, embedded in the concrete, a junction box used to splice wires down to another wall outlet. As I was going to re-bury it, I needed to disconnect these wires. (and run power up from the basement to that outlet).

I followed protocol and flipped the breaker and made sure the lights were off. While I was removing the fixture (LEFT LIGHT) to disconnect the offending circuit, I received a mild shock. I pulled out my tester, and found 120v from white to ground, even though the circuit was off.

Feeling that that famous electrician, Some Genius, had once again been set loose in my house, I decided that it was time to call in a professional.

He arrived the next day and found no voltage on the white wire.

I"m wondering why I found the voltage, and he didn't. Is it possible that CFLs act as a capacitor and can energize a wire for a period of time?

Neutrals are hot anytime a load is connected. That's why we call them "conductors" and insulate them (note this is different than the practice in automobiles). What's supposed to keep them near earth is a solid connection back to the neutral busbar that has much more conductivity than you. When you interrupt that connection, the load will "pull up" the neutral to line voltage, and will place you in series with the load.

The sparky didn't see it, because at the time, the load was unplugged/off.

"But I turned off the breaker!" That particular load was on a different hot circuit, but was stealing neutral from your circuit. This is either a wiring error/laziness... Or a multi-wire branch circuit, whose entire design is to do that. However all legs of an MWBC are supposed to travel in the same cable.

1
Third Wire in 14-3 Wire Showing 50V When There Should be None
0
Why is there a white wire connected to multiple black wires in my light box?
1
Existing Ceiling Fan fixture doesn't work - 2 hot wires, 1 neutral all confusion
2
Confusing ceiling light fixture wiring
0
Why is the circuit shorting after connecting a new light fixture?
1
Why does my outlet have two white wires on the neutral side and one "neutral" wire is hot?
3
White neutral wire wirenutted to black hot
0
3 cables junction at 1 ceiling light - how to properly replace?