I am trying to find a way of getting my kitchen to be fully handleless, but the more i research and try different thing the more it gets tricky. How can i make a push to open drawers on Ikea maximera kitchen units? 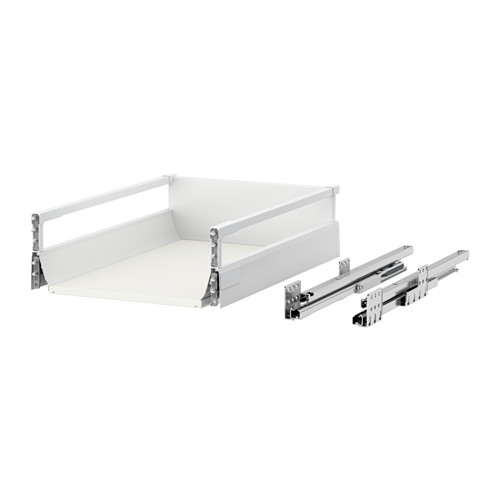 I know that Blum used to make kitchen hardware for IKEA but i don't think this is the case any longer. Also i am running Gloss white, so i can't use VOXTORP fronts as they are NOT in gloss white...

The IKEA Maximera drawers are a special order version of Blum's Tandembox antaro line. Blum's name is stamped on the drawer slides. They appear to be almost identical.

There are a couple videos on YouTube, where people show that they have removed the soft closer on other types of IKEA drawers (not SEKTION) , and used the IKEA push to open unit mounted to the sidewall instead.

Looking through the Blum catalog, they offer a push-to-open accessory branded "Tip-On" which they sell a version for Tandembox drawers. It appears to mount under the drawer near the front of the slide. It may just attach to the the Maximera, hard to say.

I have done this. It requires some engineering but it works great.

I have built jigs and made retrofit brackets that allow you to use blum’s tip-on mechanism with ikea’s maximera kitchen drawers.

I also installed this on 13 drawers of my own kitchen and it works very well.

Here’s a video of the system in action. It’s soft close and push to open and triggers evenly on both sides of the drawer, irrespective of which side you push on.

If you’d like more info then drop me a line on pushopendrawer@gmail.com

Not the answer you're looking for? Browse other questions tagged drawers or ask your own question.

10
How can I open an overfilled drawer?
1
How can I replace a missing IKEA drawer slide?
6
How do I remove this sliding drawer in my kitchen?
3
how to install drawer slides but are scraping against drawer?
0
How to repair this kitchen drawer front panel?
0
How can I open a stuck, overfilled kitchen drawer that doesn't have a horizontal entry point?
2
Broken push to close latch, drawer closed