Can the floor framing in my 1930s bathroom support my tub and shower?

I've stripped my 2nd floor bathroom to the studs and joists, installed new plumbing and electricity, and moved a few things around. The tub I'm putting in is acrylic, and weighs less than the cast iron tub I removed. But it holds 25 gallons more water. I'm also installing a glass shower enclosure with a tiled shower pan. And that should add about 200lbs. to the floor as well.

My joists span at least 10' but not more than 12'. They are 16" apart, except for the one parallel to a load-bearing wall, which is 24" away, originally designed like that to make room for the waste plumbing of the 1930s. 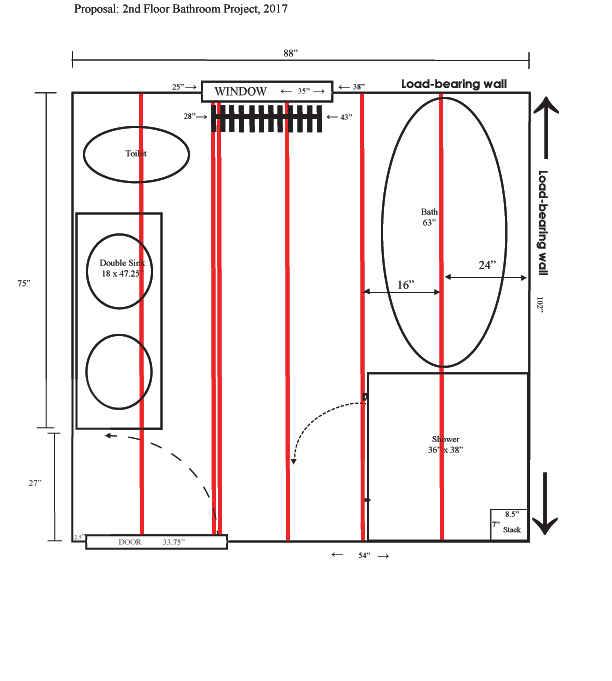 My question is: what kind of weight can I expect this thing to support? My real concern is the tub. It weighs in at only 105 lbs. But full of up to 60 gallons of water, it could weigh as much as 585 lbs. Do you think the floor can handle it?

I should also add that instead of using 1/4" cement board on the floors, I've poured self-leveling cement. At six bags, it adds at least another 360 lbs. to the floor.

If I assume you have 2x12 joists, then it's all good. If you want it better you can add full depth joist blocking perpendicular to the joists to try and help the floor out a little, but you don't have to.

If I assume you have 2x10 joists, then it's all good except for that joist under the shower/tub. It probably wouldn't catastrophically fail, but add a second joist next to it if possible. It'll also help prevent your new tile job from cracking by decreasing the live load deflection you'll get when filling the tub. If you absolutely can't add another joist there, you can add full depth joist blocking perpendicular to the joists to try and help the floor out a little.

Obviously, the critical support is located under the tub/shower. However, there are other areas of concern too: 1) size and grade of joists, 2) bearing wall location opposite exterior wall, 3) finish floor material and finish ceiling material below.

As you can see, 2x6’s are close and 2x8’s are fine for the entire room, except for the added water (tub/shower area).

Because the tub/shower area exceeds the allowable loads supported by 2x6 @ 16” oc, it will deflect and crack the tile floor and gypsum board ceiling below. I recommend adding 1 joist on each side of the existing joist under the tub. Make sure it fits tight against the subfloor, because new 2x6’s are smaller than your 1930 2x6’s.

Oh, one more thing. There’s a lot of load on that bearing wall. I’d make sure there’s at least 1 stud directly under each end of those joists under the tub/shower area and you have adequate footing under each bearing wall too.

Not the answer you're looking for? Browse other questions tagged flooring or ask your own question.

7
How should I build a raised subfloor for my basement bathroom?
0
Can I support a fiberglass tub with a layer of 1" thick foam board between a concrete subfloor and mortar base?
2
How much weight can floor made of plywood over joists on concrete slab support?
0
Staining and varnishing a new floor board to match the rest of the floor
2
Adding more floor joists in a crawlspace. Originals are 5' OC and need more support
2
Is this a floor framing system? what is the difference between joist splices and floor joists?
3
What kind of bathroom floor is this, and how to remove it?