Is this wiring safe? 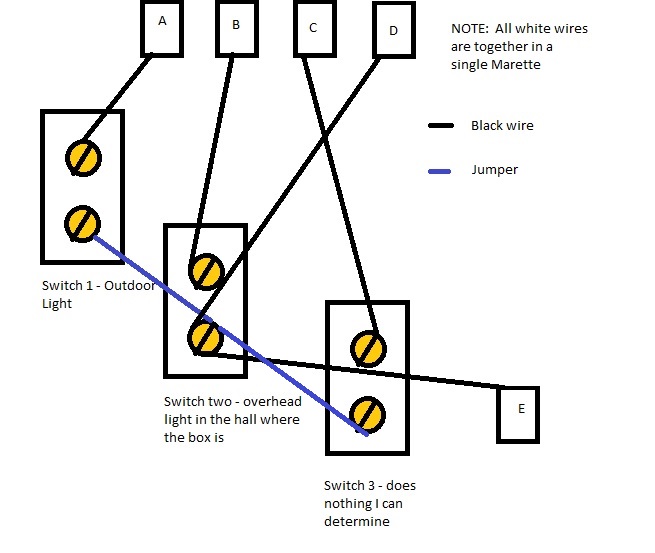 Purchased a mid 50's built house last year. Knew that a switch in one of hallways had a switch that appeared to do nothing... Having done many simple wiring projects (lucky to have done renovation with a friend who was an electrician) that passed building inspection, I thought I'd check this out myself! I checked receptacles, lights, even looked for possible pump or furnace connections, to no avail. So I opened the switch box to see if it was maybe disconnected ... and found 5 wires in the box.

The drawing represents what I found. The switches themselves had only two screws each, both on the same side, with a ground switch at the back. All of the white wires were maretted together. Note that switch 1 and 2 (and switch two and three) have a jumper between them and that switch two has 4 black wires on a single screw (which is the safety concern I have.) I am hoping someone here can tell me if:

ADDENDUM: I have been rummaging around in the attic (yes, low and cold) and determined that the feed from the panel enters the switch box as wire D. The mystery switch goes to a wire that runs the length of the attic to another part of the house with a second attic (there was an addition in the 70's). I believe the solution to the terminal overload is a pigtail (everything in the green circle) that includes the power feed from wire(cable?) D. 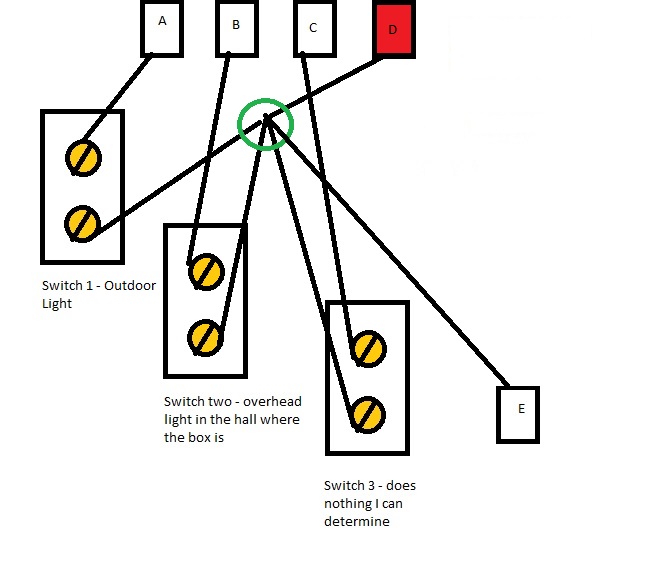 With the new pigtail config then you should be good if everything is properly grounded and the box is big enough. If the box is metal (which I suspect it is) then the ground wire should be bonded to the box.

1./2. You can use splicing connector to connect all 5 wires to power up switches safely.

Having hot wire leading "somewhere" in the house is not good idea. You may need to drill a hole somewhere and finding such cable by the drill is not good at all.

1
Why isn't this 3-way wiring working?
2
Help wiring timed fan switch
1
What's wrong with my wiring of this light switch?
0
Trying to figure out this wiring
0
Help getting switch working properly
2
Wiring new light switch
0
How do I wire one outlet and two separate light switches in a three-gang box?
3
TWO ORIGINAL SWITCHES - ONE three-way and one single cant figure out wiring for SAFE UPGRADE
1
What are the wires in this old switch box?
2
All wires hot in 3-wire cable to 3-way switches?