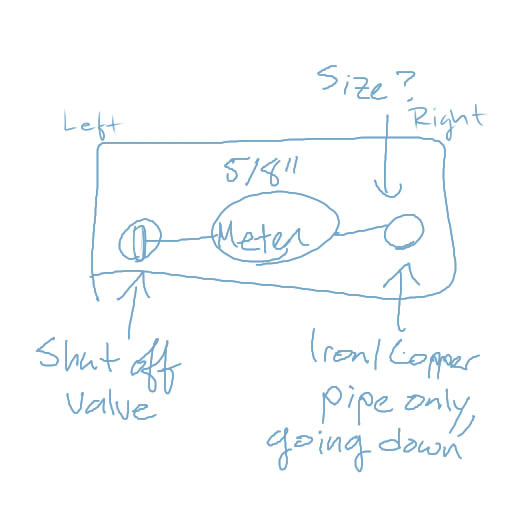 I am currently working on running a new water system from the city water to my house. I have several concerns:

Is PEX with sand a good method of running water from city to house? Will it withstand water pressure and not burst?

Which side is the homeowners responsibility? Or rather, which side am I changing the pipe on? If I cut the wrong side, we know amiss things happen. More information is described in the above image.

Also, given a 5/8" meter, what pipe size would be used for connecting the pipe from meter to house?

I probably shouldn't be asking more than 1 question in one thread, but the answer as to which side the homeowner is responsible is probably the most important.

I have not seen a minimum code for size on the customer side, with that said most homes do have a minimum of 3/4" pipe with 1" being common on longer distances.

All of the properties I have owned the customer was responsible after the meter. In 1 town I did have to replace the meter, the meter had to be purchased from the city.

I would go with 1" to reduce any pressure drop to the home. I would check with the city or water district to make sure there are no restrictions or requirements you may be unaware of. I have seen PVC, copper, and galvanized pipe used to connect to city water systems.

Since you did not say anything about the age of your home it was common in years past to use incoming water line as the grounding electrode. If you replace the line with non metallic please check your grounding electrode system. I have found several homes that had their supplies updated with PVC that removed the ground and did create a hazard but 2 new ground rods needed to be added to these houses to make the electrical system safe again.

6
When replacing a supply line to a house in Houston, TX, what is the best material to use?
0
How can I determine what size main water meter is required?
1
Options for fixing leaking polybutylene water service line
1
Can I connect an indoor water meter to water heater with PEX?
2
Should I use 1-inch pipe for water main?
0
Would Replacing an Existing 3/4" Water Main Line with 1" Improve Overall Volume/Flow to House (GPM)
1
Should this section of water line be replaced?
0
Water meter to a PVC pipe to a metal pipe. Why?
3
How can I tell PEX from polybutylene pipe?