Moved into a new home a couple months ago. Car was broken into on my driveway a week ago, and one of my garage door openers was stolen (along with some other things). The problem is that the opener refuses to erase the memory for connected remotes.

I have followed the instructions on the device, YouTube, and LiftMaster support docs, and none of them are erasing the memory. All directions say to hold down the LEARN button for 6 seconds and wait for an LED. I've held it down for 6 seconds, 60 seconds, etc.

I currently have remotes "locked" via the control panel, but need to reset the memory.

Is my circuit board fried? What are my options? 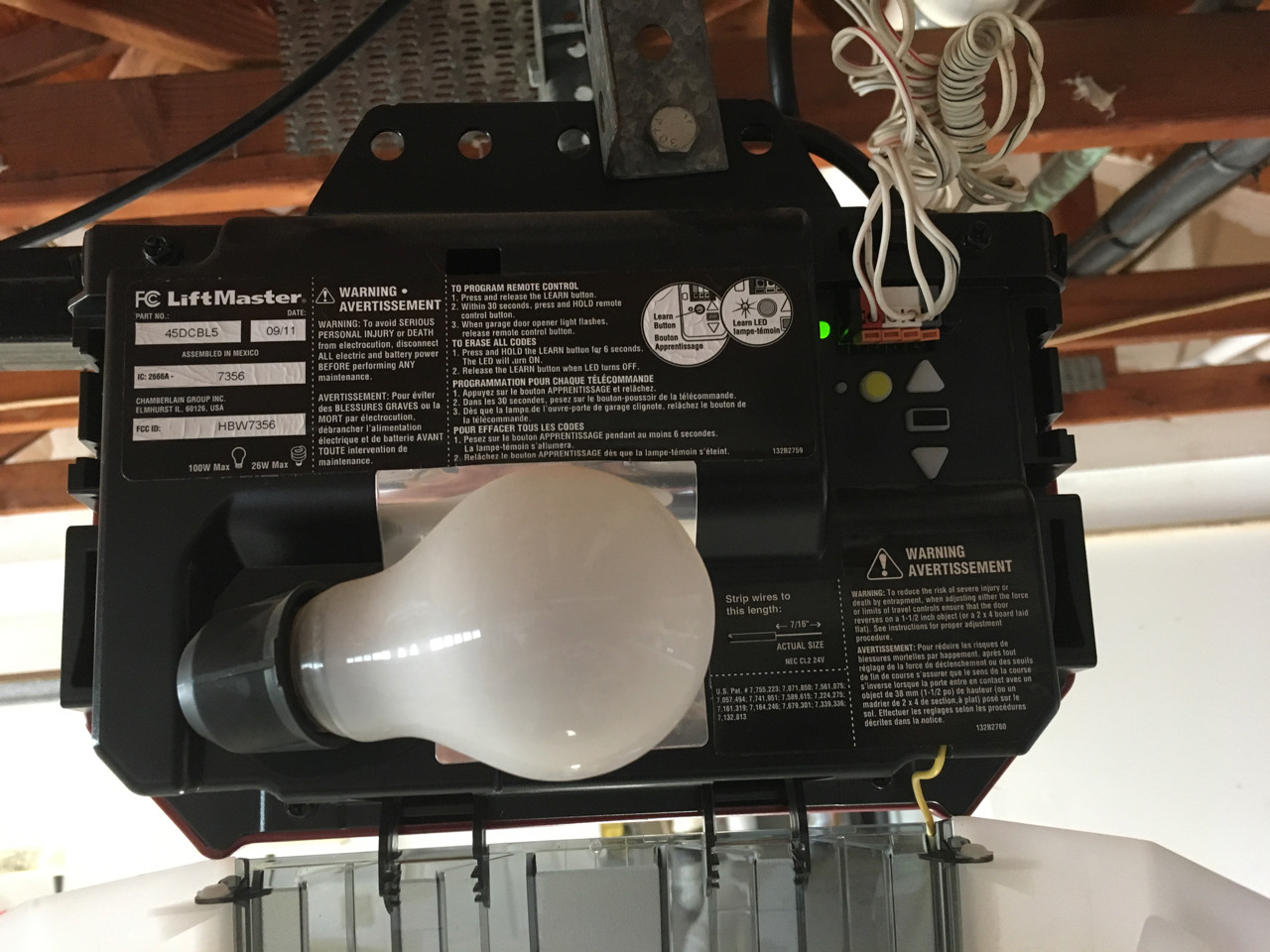 Just looking at the instructions you wrote and comparing to the instructions on the Liftmaster in your picture (you can read them on the back of your unit) - there is one small discrepancy and some info that you did not state.

1: Did the LED turn on when you pressed that Learn button (YELLOW BUTTON ) ?

THE LED that should light is the one to the left of the Yellow Button (next to the White Up/Down buttons).

2: Did you hold the button and wait for the LED to turn off?

Once that has been done exactly as specified As in the quote of step 2 (if that does not erase the codes), do the procedure again and then with out pressing any buttons or anything else unplug your Liftmaster for 1 minute, and then plug it back in.

If the Learn LED never lights when you press the LEARN button (and you know for sure the LED works) .. Then it could be something very simple - like your learn button is broken - but don't get anxiety over that - to repair that it could be very easy as sometimes these are plastic with an eraser like surface on the other end - when pushed the eraser like surface touches two copper traces of a printed circuit board (PCB) together to make contact.

TO FIX LEARN BUTTON : Clean Eraser like substance with alcohol (not rubbing as it has oil) , use a pencil eraser on the PCB copper traces underneath the button - then clean with alcohol - reassemble and test the switch. And of course the unit should be unplugged when you do this cleaning.

If the switch is not of the above mentioned type - but a board mounted switch You can also check the switch with the logic unit removed - perhaps a bad solder joint on the logic board.

If you should choose not to do those checks or just don't want to invest time in that - you can order a new logic board for the 8550 (I am not sure but I am guessing yours is similar to the 8550 or 8550W) guessing by the part number in your picture.

045DCT is a Security+ 2.0® receiver logic board replacement kit. Compatible with various LiftMaster® DC chain and belt drive garage door openers; made after 2011. The unit will feature a yellow learn button. Check the manual for your specific model number before ordering to ensure compatibility.

Also if you are in the USA : Since you have to do this because someone stole your Remote Entry - Theft - Capital Loss - the possibility exists that if you itemize you could write off the expenses of repair as a loss. I know that is a tax tip and not a fix it tip but just thought I might include something that could be positive in a bad situation.

Not the answer you're looking for? Browse other questions tagged electrical garage garage-door-opener or ask your own question.