I live in Karachi, Pakistan. We have underground water tanks and use motors to transfer the amount of water required to overhead tanks that then supply the house.

I get lower pressure in my house's upper section bathrooms. I had the pipes replaced recently so there is not blockage. Its just the natural pressure.

I was wondering if someone could guide me towards the equipment and associated tips on how to install an additional motor to increase the flow.

The usual way I'd hook up a house to a tank or cistern (such as in a low-yield well situation) would be to have a pump going into a pressure system (pressure tank + switch) and then supplying the rest of the house. The pressure tank would normally operate at 40/60psi: When you draw water, you're always pulling from the tank until the pressure drops below 40psi, at which point the pump kicks on and runs until the pressure is 60psi.

This system also shows the supply side coming from the well, but the supply is really irrelevant.

You can also use a jet pump or pretty much any other type of pump as opposed to a submersible so long as it's capable of reaching 60psi. Some people also run at 30/50. Over 80 and you risk toilet tank valves and faucets having trouble/leaking, and too low and it's just not useful (and the pressure switch probably has a low operating limit too).

There are also pressure switches that have a shut-off feature where if the pressure drops below 20psi, they totally switch off because they detect an "out of water" situation. This is a nice cheap way to go as opposed to more expensive electronic shut-off systems, but when they trip they require a manual reset (flipping the little arm on the side). 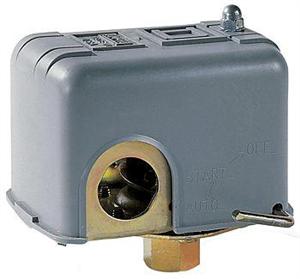 Not the answer you're looking for? Browse other questions tagged plumbing water shower or ask your own question.

1
What should I do if the pressure is too high in a home water pressure increasing system?
1
How to pump water from two cisterns with one pump
0
Hot Water Pump Too Sensitive to Cold Water Pressure
0
For increasing shower pressure, Mixer or thermostatic valve?
1
Increasing water temperature in water heater
1
Do nice water pump pressure switches exist?
0
Water Pressure Pump Location
0
Submersible water pump pressure
1
Placement of air pressure tank with respect to outlet of the water pressure pump