Going from conduit to NM in new framed wall (commercial)

I'm framing up an office inside a warehouse using 2x4 lumber. There is a framed wall against an existing side wall of the warehouse. Along the existing wall is conduit and two boxes with receptacles. I was going to remove the entire thing, but one of these boxes is also a junction box that leads to the lighting. I need to remove at least one of the boxes (because it's in the way of a stud), and so I'd like to run new wire through the new framed wall (NM).

However, I'm not sure how to transition (any of) the wiring from the panel at the back wall (which will not have a new framed wall around it) to the new framed walls.

The run to the lighting connects here: 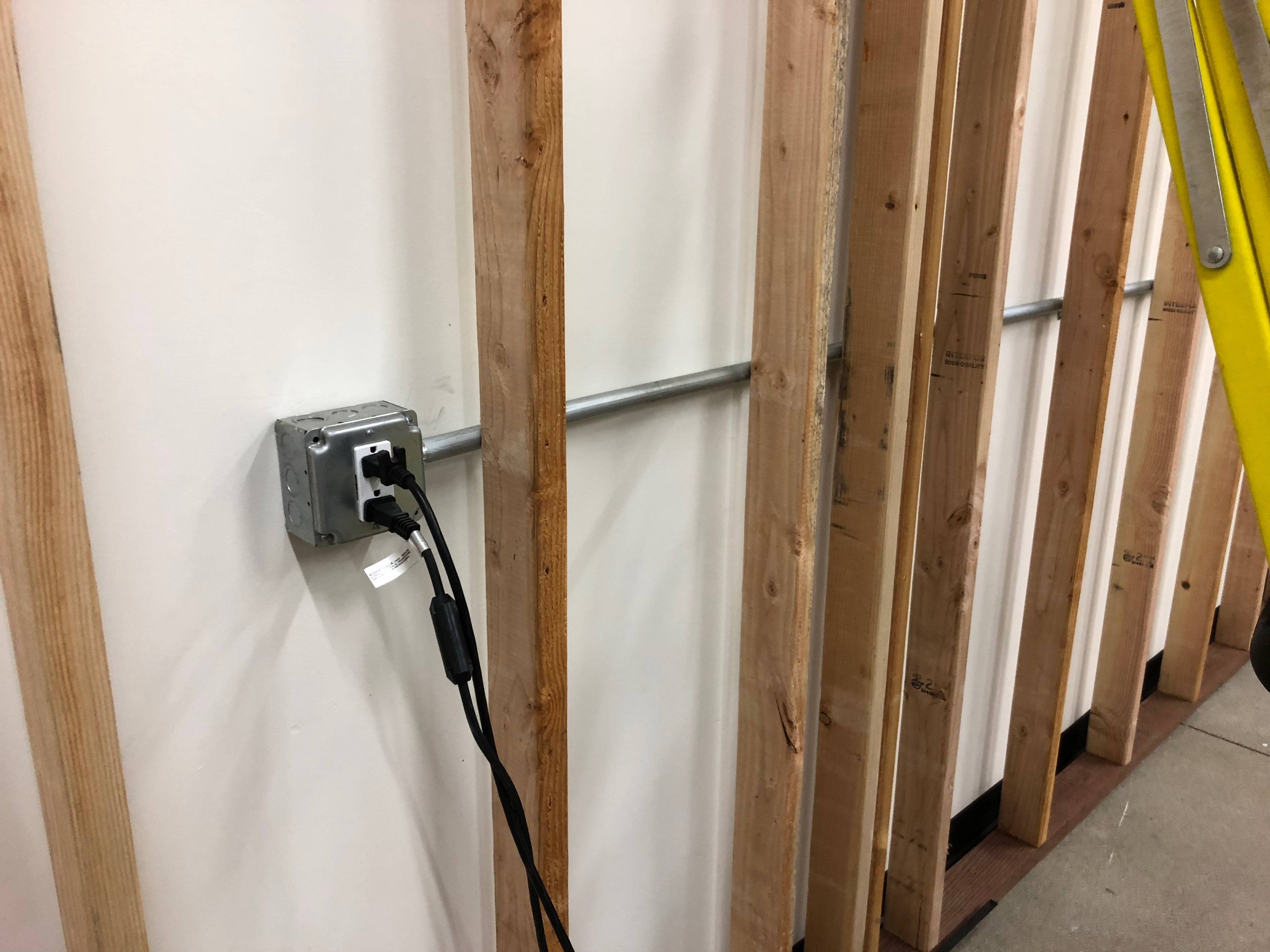 Here you can see where the conduit continues to the panel, and the box that needs to be removed. I need to build a last framed wall section in that corner, but the conduit is in the way (I don't want to notch the studs, particularly the last stud).

How can I run NM through the studs and properly transition to connect to the panel? 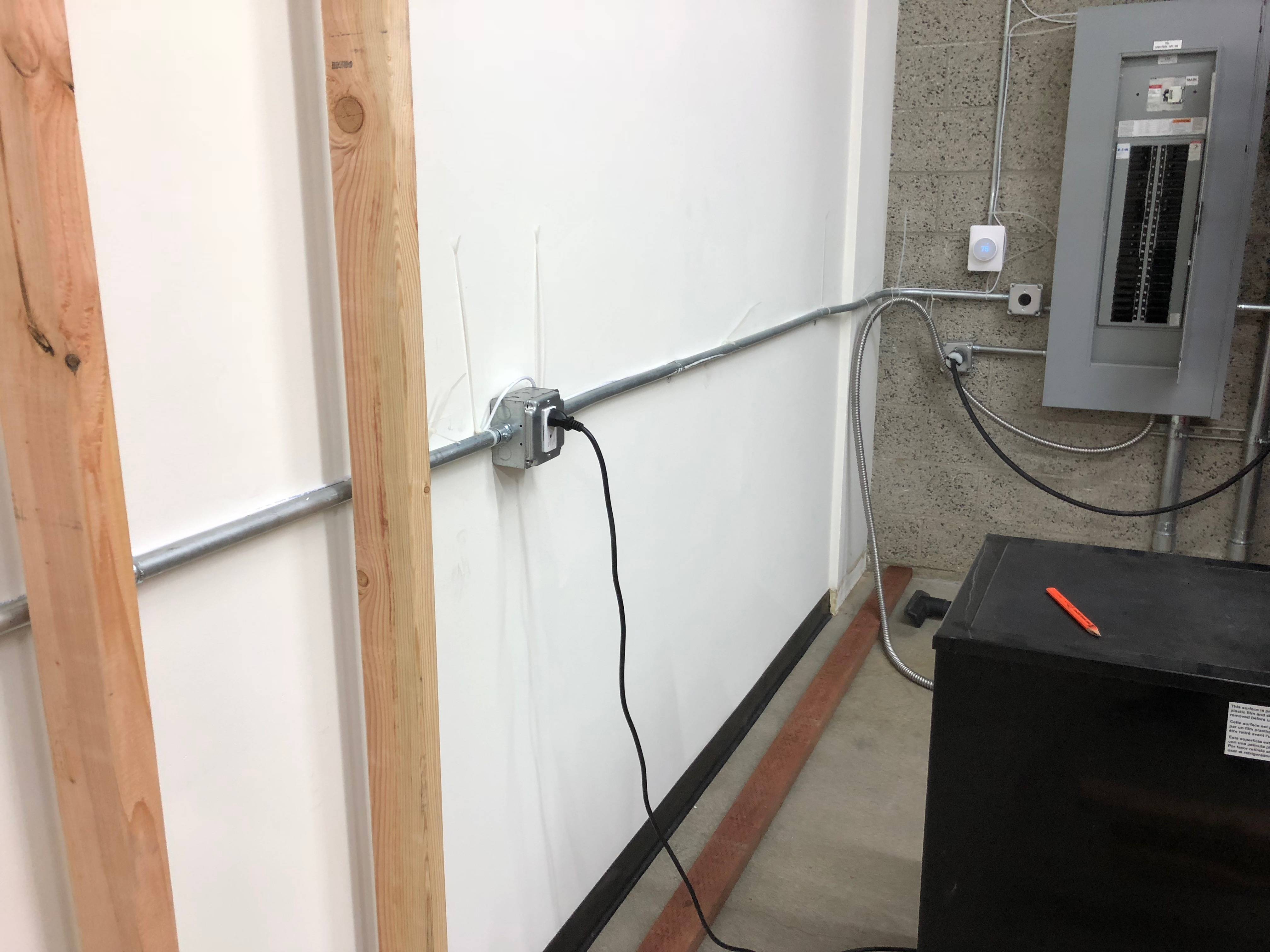 Note: as I understand it, I can't have receptacles in the wall like that, so I'll be removing it and replacing the junction box with a cover. But it's still not accessible once drywalled, so I'm not sure if that's to code or not.

"In the way of a stud" implies a heck of a lot more stud consistency than is actually required in a (pretty clearly) non-load-bearing wall, for one thing. But if you feel you must, if there's no wire into the wall from that box, you can reposition the box by pulling out the wire, cutting the conduit and using a conduit coupling to shift the position of the box along the conduit by the amount you cut off. Of course, at that point you need new wires on whichever side got longer in that event, since you would otherwise need an accessible junction box where the box you want to move was.

NM cable is generally not allowed in commercial, for another.

And junction boxes cannot be covered up, period. They can, however, be extended to the face of the wall (look at box extension rings, they clip to the box like a cover at one end, and take the box cover at the other end. Alternatively, there are standard access panels to install in drywall and give more working room (if the wires won't come out to the face of an extended box, you once again need new longer wires that will. A panel makes the original non-extended box accessible.)

Personally, I'd suggest getting comfortable with bending EMT - it's not hard, and it's got some advantages over MC in my opinion (you can pull wires as needed, for the most obvious point.) MC may be an easier concept if you think like NM but need to work commercial, but in many cases EMT will also come out cheaper all told.

Remove some of the conduit or all the conduit and replace it with MC cable. Replace the boxes where you can easily. On the box or boxes that must stay, install extension rings and mud rings to bring flush with outer surface of finished sheet rock. After wall is painted trim as normal. At the panel to start the run, if need be, install a piece of 1/2" EMT from the panel and bend it to enter the open stud wall and terminate in the middle, both ways, of the stud bay. Finish the termination with a 1/2" SS connector and a 1/2" GRC coupling. Put an MC connector into the GRC coupling. Strip sufficient extra jacket off the MC to allow the conductors to reach well into the panel. Use 12-3 if necessary. Still short on conductors, make two runs from the panel.

You can do as @Paul Logan suggested or you can cut your EMT back, mount the 4 sq box flush with the stud and add a plaster ring for the thickness of your drywall and finish. You can make a transition with a EMT to Flex adapter or build one out of an EMT connector, A threaded coupling and a flex connector. Then make a transition from EMT to flex and connect it to the box. Keep the flex under 3 feet.

If you want to run more devices than just the one shown then I would continue with MC just as @Paul Logan suggested.

Not the answer you're looking for? Browse other questions tagged electrical framing or ask your own question.

2
How should I connect conduit in the wall to conduit on the ceiling?
3
What is the maximum number of load bearing studs in a row that can be notched?
3
Newly framed bathroom wall not square, how bad will the tile look?
1
How to relocate 50 amp hot tub wires from PVC conduit into ceiling joists
1
What is the best way to add new stud framing above fireplace and tie it into existing framing?
2
New 20amp circuit via old conduit or not?
1
Exposed Conduit Transition Into Wall
3
Junction box partially behind drywall and partially exposed
2
Outside Outlet on Trailer, Wired from Inside in Conduit
2
Junction or pull box