So I have cuttable, weatherproof led strips with the flexible silicone coating domed over the strip. I just have cut a correct length piece of a strip. Now both ends has four copper connectors. I want to expose those copper wires in one end.

So I first cut:

First possible problem here is cutting too deep and cutting off one of the wires.

Next is trying to get rid off the top material on the wires. Problems here are that:

Next is that there's a very thin film on top of the wires or some wire(s).

I've tried to burn it off with soldering iron and sometimes it just smears the material over the wires or damages the strip so that the whole strip won't work or one color won't work anymore. I've also tried scraping it with sharp knife and the problems are the same (damaging wires or just smearing).

Is there tools such as the RJ45 ethernet crimping tool used with ethernet cables but for LED strips, or proper technique to expose those wires properly?

It's costly to try and fail and then cut yet another 10-30 cm off the strip and try again.

I have used weatherproof LED strips like in the picture below. My technique was: 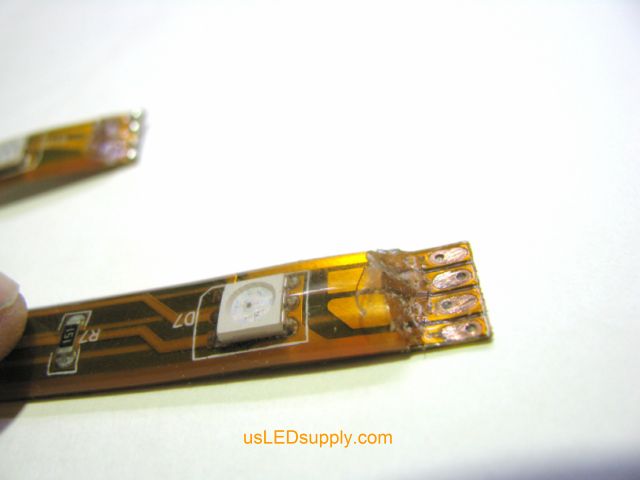 I have not used their how-to, I have only used the non-solder connectors. I was able to make my splices look much cleaner, but I couldn't find a better image.

Not the answer you're looking for? Browse other questions tagged led wire cutting connectors or ask your own question.