I'm replacing my bathroom compact, horizontal fluorescent light bulbs in my bathroom fan. It is a 4-pin light hooked up to a ballast.

I have purchased an LED replacement from Home Depot. Specifically, product PL26E/H/841/LED who's spec sheet is here. No where in the spec sheet or on the product packaging, does it mention anything about a ballast (bypass or not). And since the spec sheet doesn't mention amps, I'll mention here that the light unit has printed on it: 12W and 560mA

Based on my light replacement attempts, can you tell me where I'm going wrong? Is 120 volts too much for this LED?

I simply took out the old bulb, put in the LED, and turned it on. Nothing happened, so I consulted the internet and found out I may need to bypass the ballast. Here is a diagram I made and believe to be accurate for the wiring with the ballast. 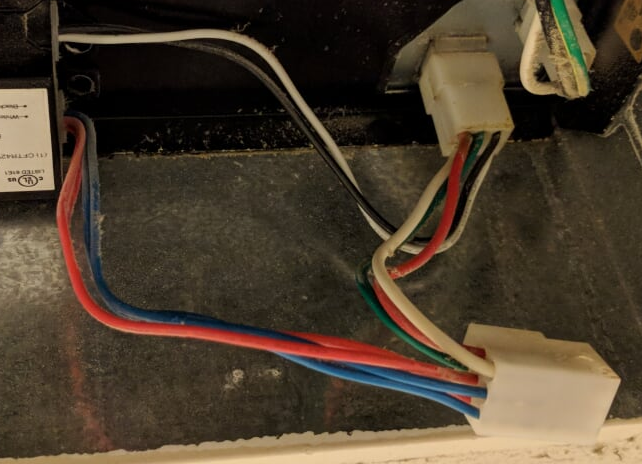 I rewired the light and bypassed the ballast by following these instructions. Below are some pictures of the wiring now; yes, I need to cap off the exposed ballast wires circled at some point for safety. When plugging in a brand new light (not the same as attempt #1) and turning it on, it flashed at immediately shutoff. I believe I fried the light. Here is a recording I took when flipping the switch, https://1drv.ms/v/s!AqnRNsI_hCkxlIMzM1ujTclqgd66Ag.

Note, from the picture below, you will notice an extra white and red wire going into the lowest terminal/connector. These wires are for another small light bulb in my unit; this bulb works without issue. 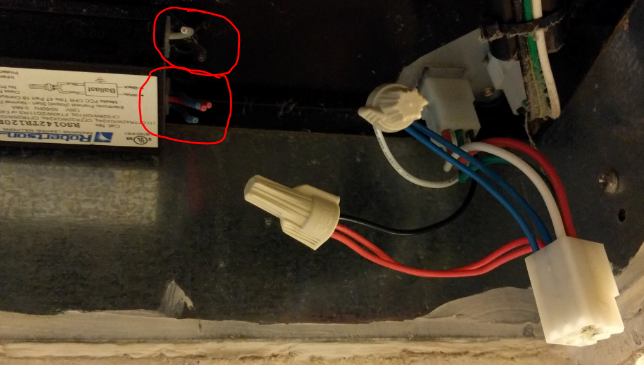 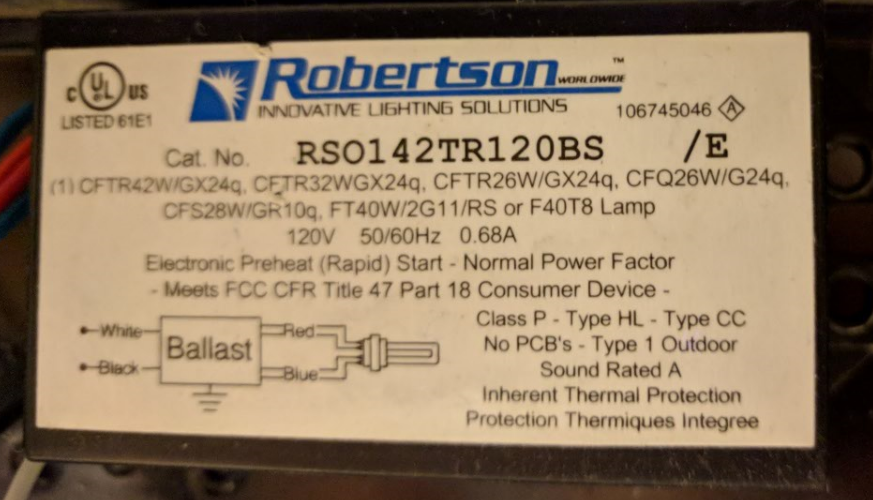 The spec sheet specifies Plug and play. That means you do not replace the ballast. The opposite is "direct wire", which is where you do.

If it were a direct-wire unit, it would specify which pins to wire to.

The spec sheet also explains why it failed initially, in the upper right it says "Feit Electric". You can tell from the errors on the data sheet they're just an importer of goods they buy across the ocean.

Seriously, though, it needs the ballast to be working. I have a feeling the ballast was defective. Regardless, it's finished, now that you cut the wires so close. (I have to imagine you kinda knew it was defective). Toss it in the trash (it's electronic, no PCB). Save the screws/nuts that hold it down though. You may need them badly, and finding random matches at the hardware store is no fun.

At this point you have 4 options:

As for the probably-fried one, take it back to HD, tell them it's defective, get your money back, and stop shopping there. This kind of wild misapplication always traces back to big-box stores.

From now on, deal with real electrical and lighting supply houses. They sell to contractors who want the best price on products that won't generate service calls.

1
Do small, modern LED lightbulbs require external heatsinks?
2
HPS bulbs and ballast wattage compatibilty vs replacement technologies
1
Replacing an LED Driver
3
Is a ballast required, or merely acceptable, for this Philips InstantFit LED tube?
0
Would these led bulbs cause a problem with this ballast?
0
either fluorescent bulbs or ballast = bad?
5
Retrofit Fluorescent Tube Fixture with LED Tubes
2
What's the right way to bypass non-functional ballast in bathroom exhaust?