French drain issue and best way to correct it

I bought a house with a french drain already installed but it seemed to get a couple wet spots around the house especially after a heavy rain.

I dug up a portion of the slab and saw that there werent any weep holes and the slab was almost cemented to the footer. See pictures. I redid sections of 2-3 feet wide to allow drainage and spaced it 5-7 feet apart to minimize the excavation volume. I drilled weep holes as far down as possible all around.

This was a remodel house where all the walls are new except an old front wall. Most of the places nothing comes out of the weep holes except the old front wall where some water is draining with every rainstorm.

Does anyone think I need to redo the whole thing? 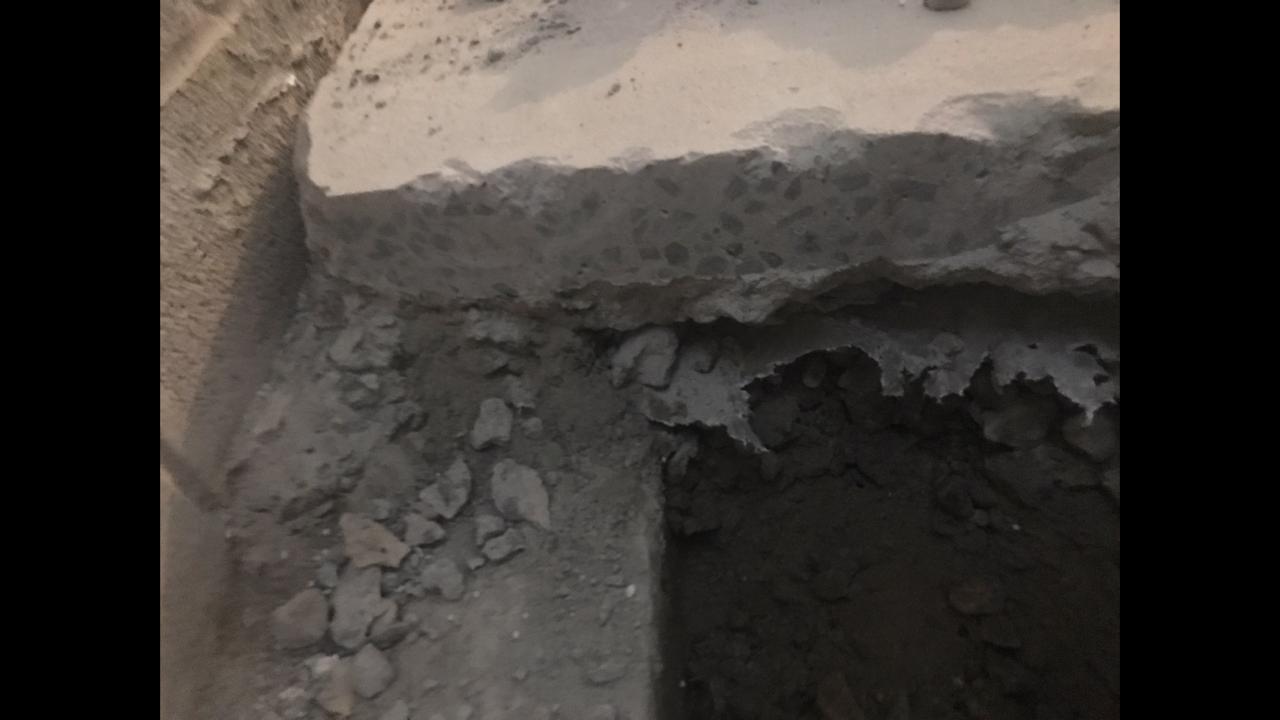 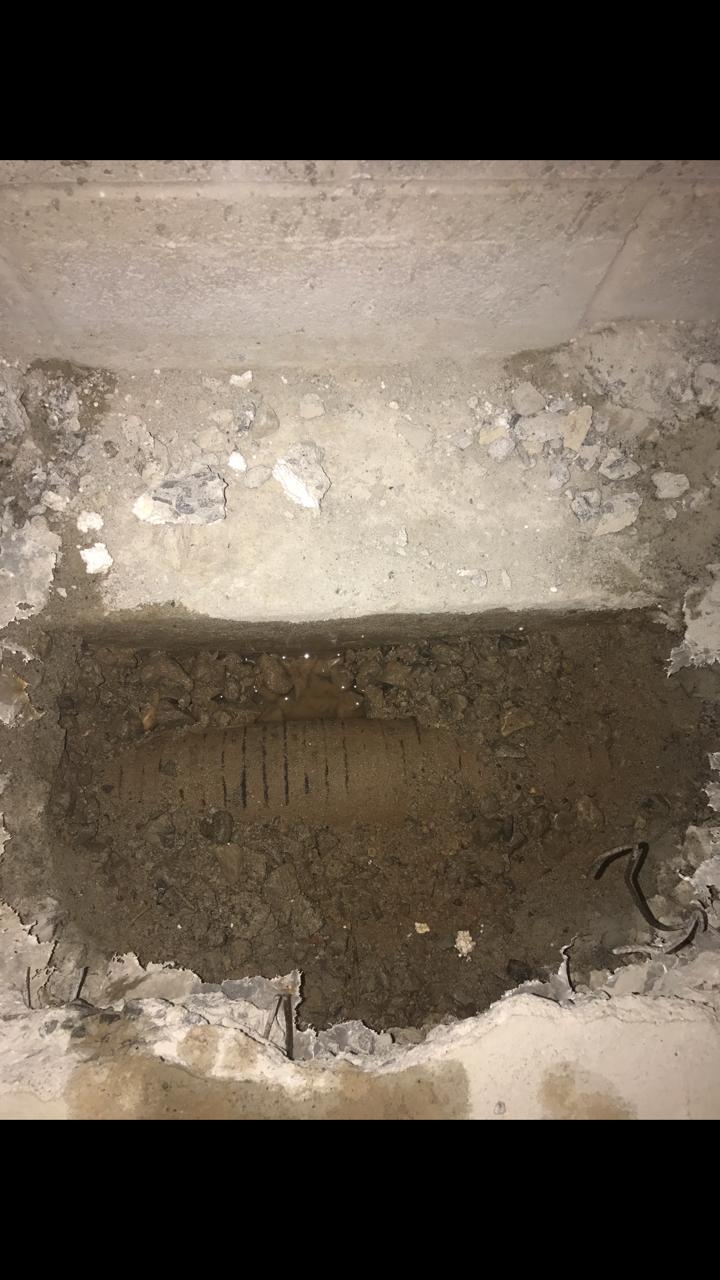 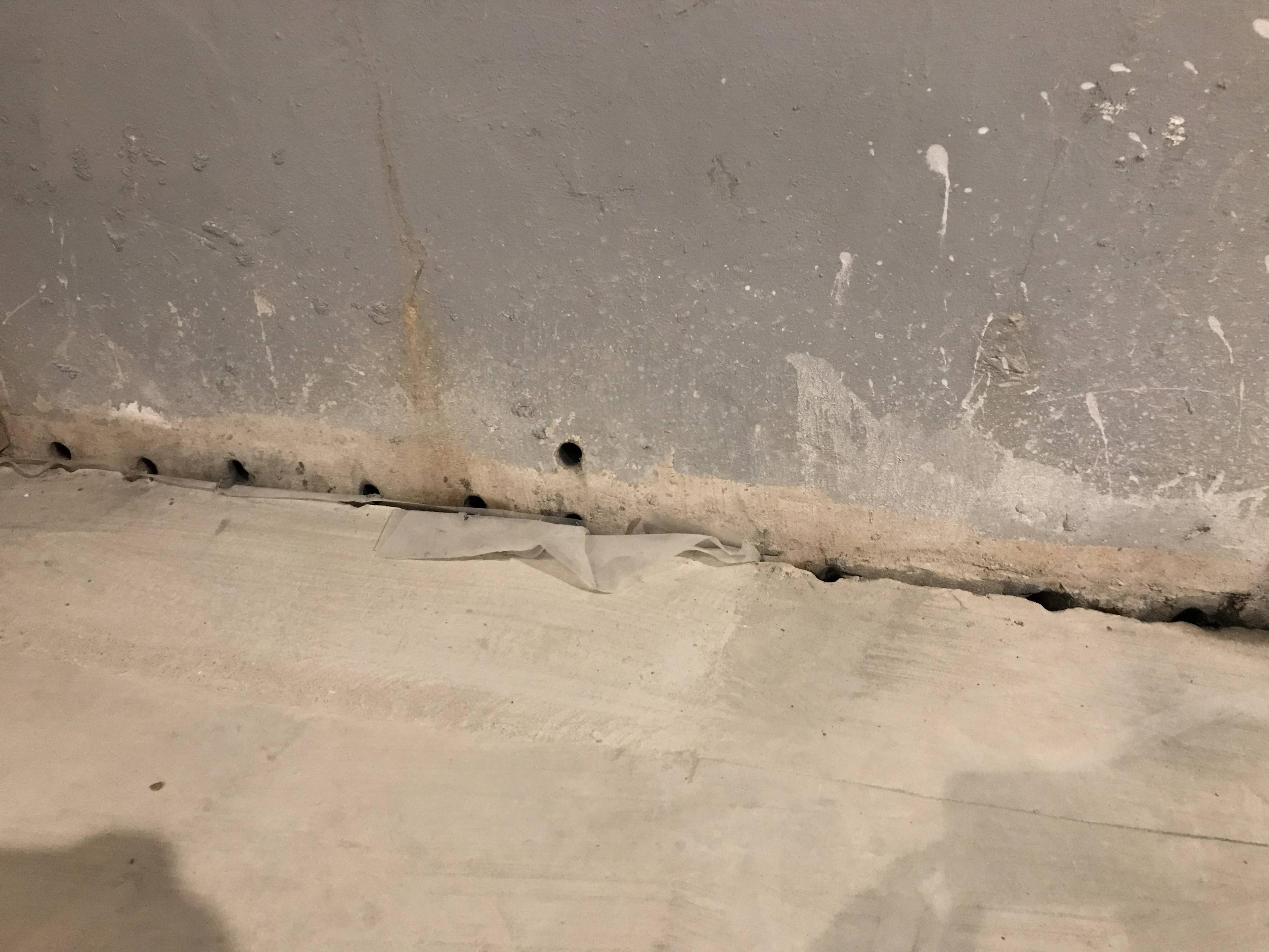 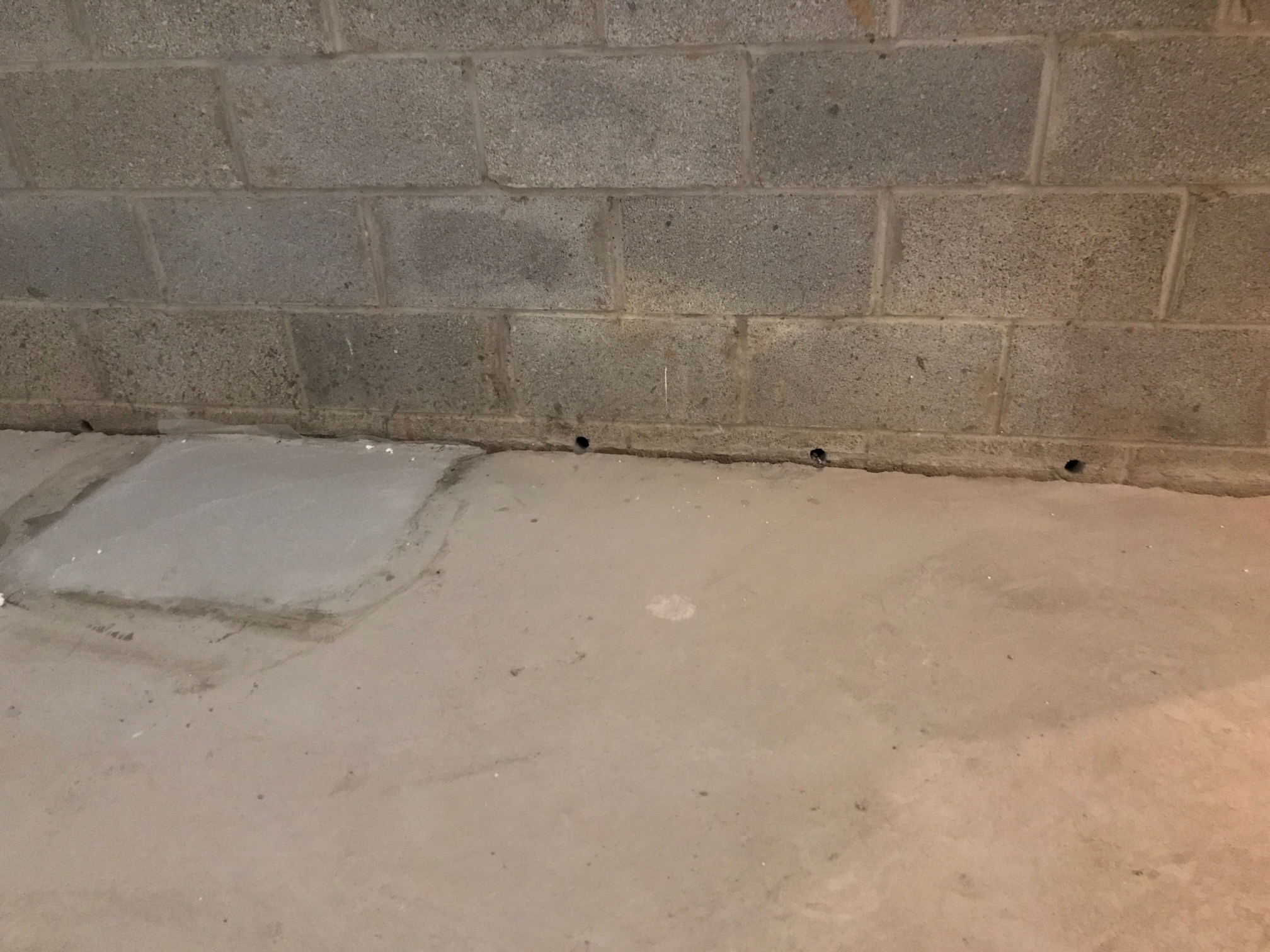 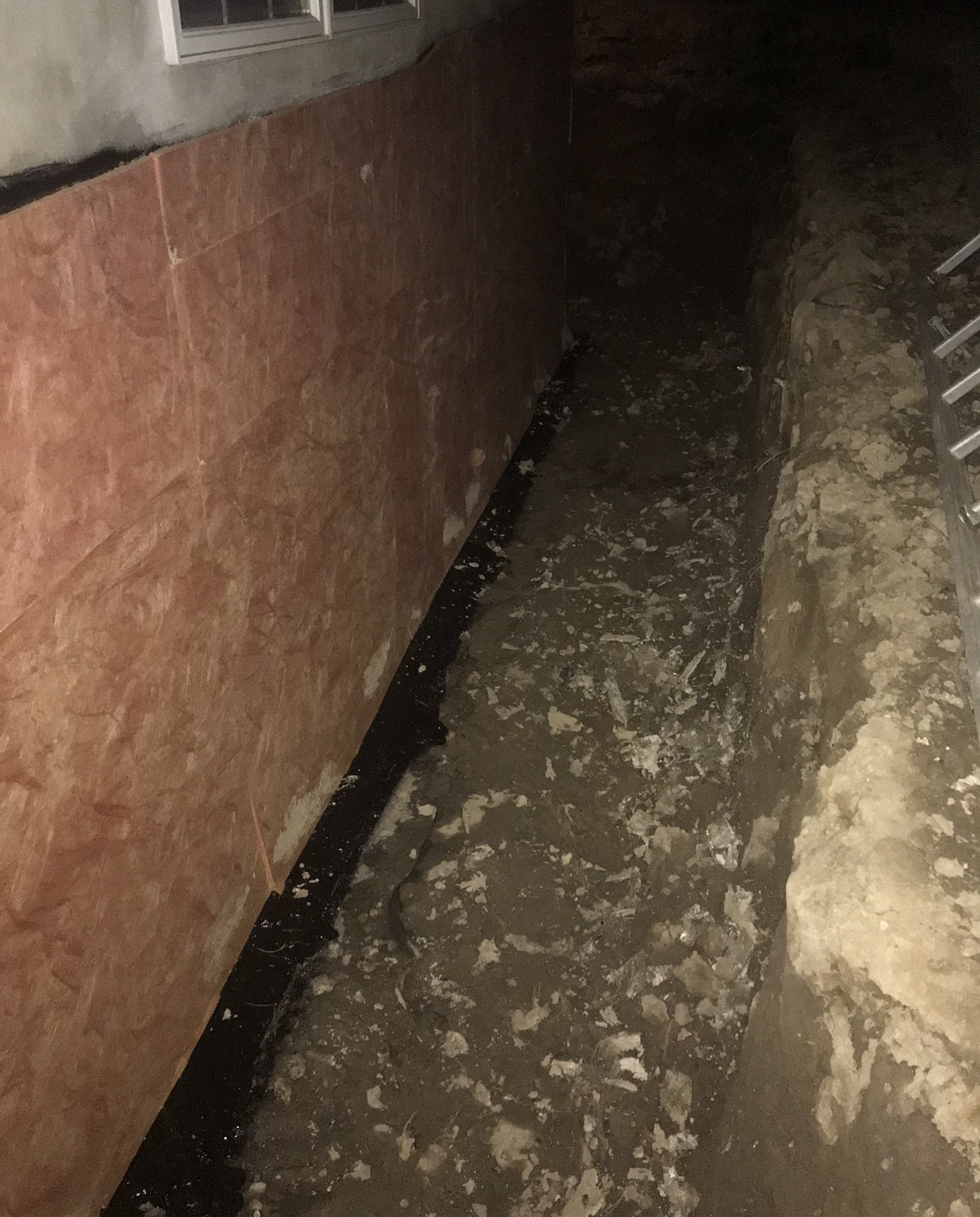 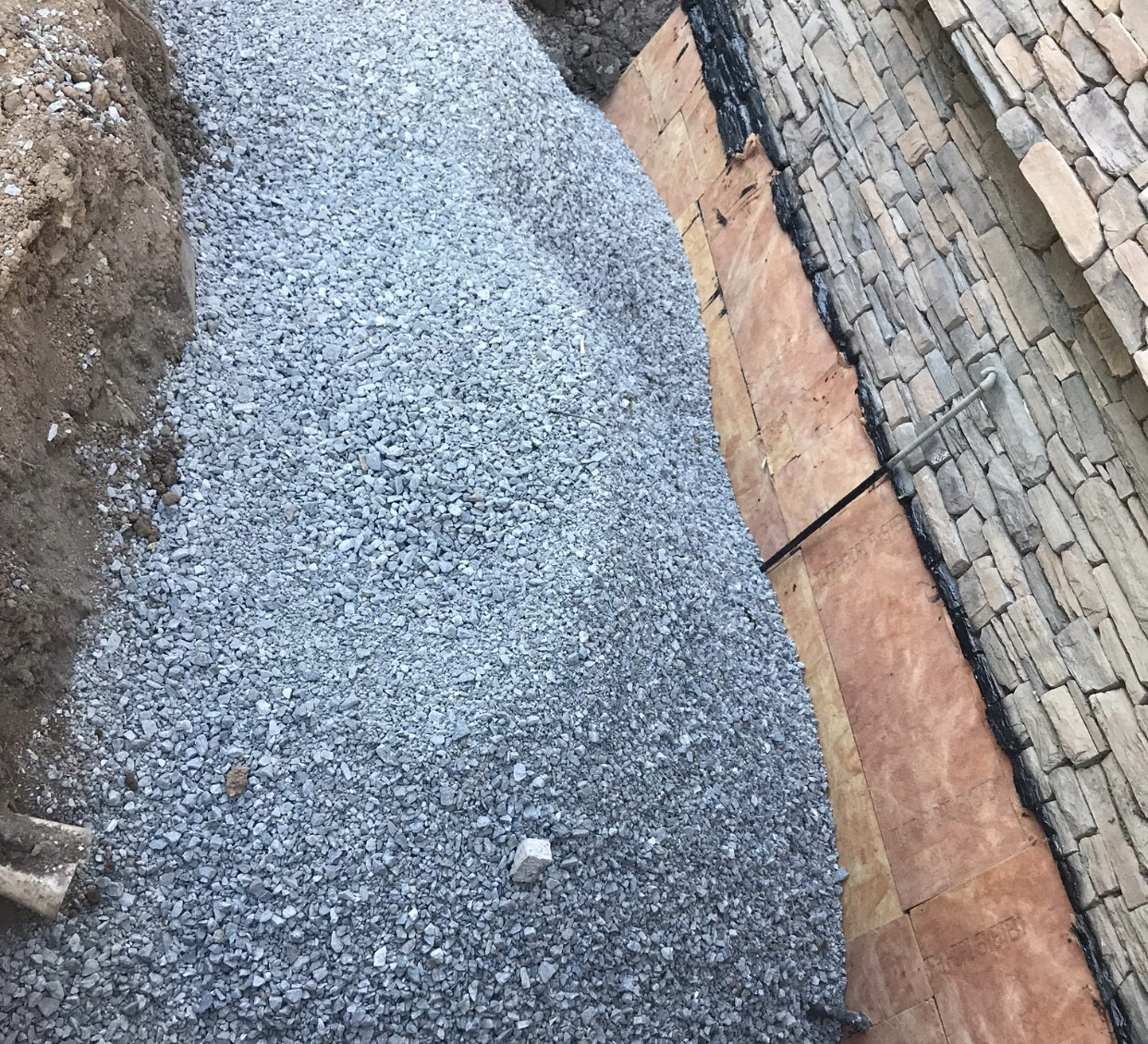 What Lee Sam's answer describes is the right way to do the job on new construction. Everything is already exposed. However, it's REALLY an expensive, messy, long-term job to do after the fact.

In a case like yours, where the foundation walls are hollow-core blocks, it's much simpler to retrofit a solution inside the basement because everything you need to do can be done right below the basement floor. You can cleanly cut away the access area with a concrete saw, and reseal the area with concrete when you're done. It does create a mess, though.

You've been trying to fix small sections, but the job can't be done right in that manner. The existing system is too silted up to be useful, and you don't have a good way to drain the walls into the system. My recommendation would be redo the interior system. Bite the bullet and do the whole job correctly. Then it will be done and be permanent.

I had this approach done on a house of my own and it was a successful solution. Ground water, rising with a high water table or collecting around the foundation, collects in the interior drain the same way it would with an exterior drain. Water entering the foundation wall from the surrounding soil drains from weep holes in the hollow cores into the system. You generally use a sump pump to discharge the collected water well away from the foundation.

A key element missing from your attempt is getting water from the weep holes into the system in a way that is sealed from the interior living space. I found a good description online of the right way to do the job (website of the aquaGUARD waterproofing company). Disclaimer: I know nothing about this company other than their web site has a good description. Some excerpts: 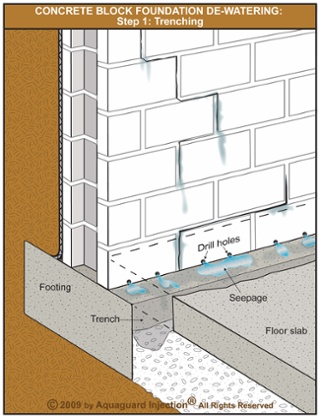 This part you already know. However, you really need to do the entire perimeter at once rather than a small section at a time so that you can effectively clean out the old material and put in a properly graded pipe and clean stone. An integrated wall treatment is involved, and that needs to be done before replacing the concrete. 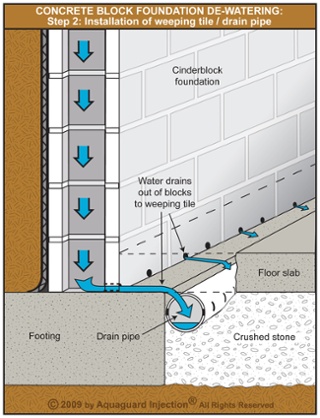 The pipe, stone and weep holes are the next step. 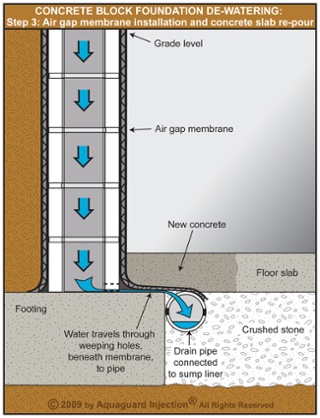 This is your missing step. An air gap membrane is applied to the interior wall, then extends over the footer and drain pipe. This completely seals any water behind and under it and channels water from the weep holes into the drain pipe. The new concrete goes over this membrane.

There are a number of membrane styles. The one used by the company that created the web site is a heavy dimpled plastic sheet that is flexible enough to bend over the footer but strong enough to support the new concrete without the air channels collapsing: 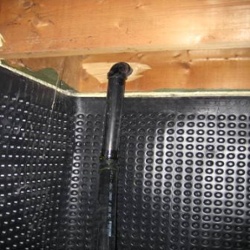 To finish the interior space, you can cover the membrane and there is no sign of the system except for the sump pump: 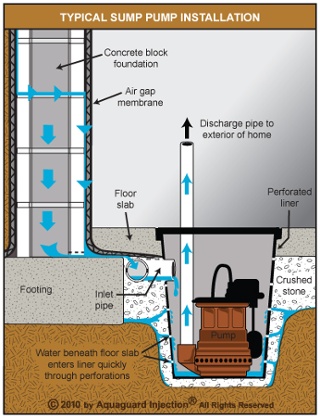 All that said, given the point your project is at, I might be tempted to explore another solution because you don't have much to lose. If it doesn't work, you could rip it out and do the job right. I'm referring to "baseboard" drain channels. I have no idea how good, reliable, or long-lasting they are, but it is a simple add-on to what you've created that doesn't involve busting up any concrete (and it does nothing for any remaining bad drain pipe in your system; it only deals with your weep holes). 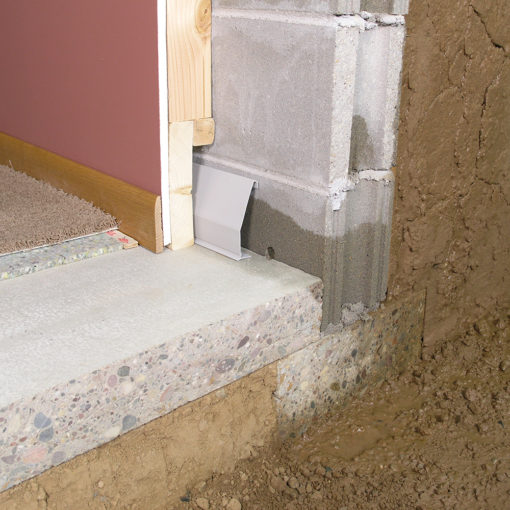 There are a few styles on the market. Basically, it's a plastic channel that you glue to the floor, and sometimes the wall. It covers the cove where the weep holes are and seals the water inside. You run the channel around the perimeter and it drains into the sump pump. This particular one is from this web site (just an example, no personal knowledge).

A similar system sold for DIYers: 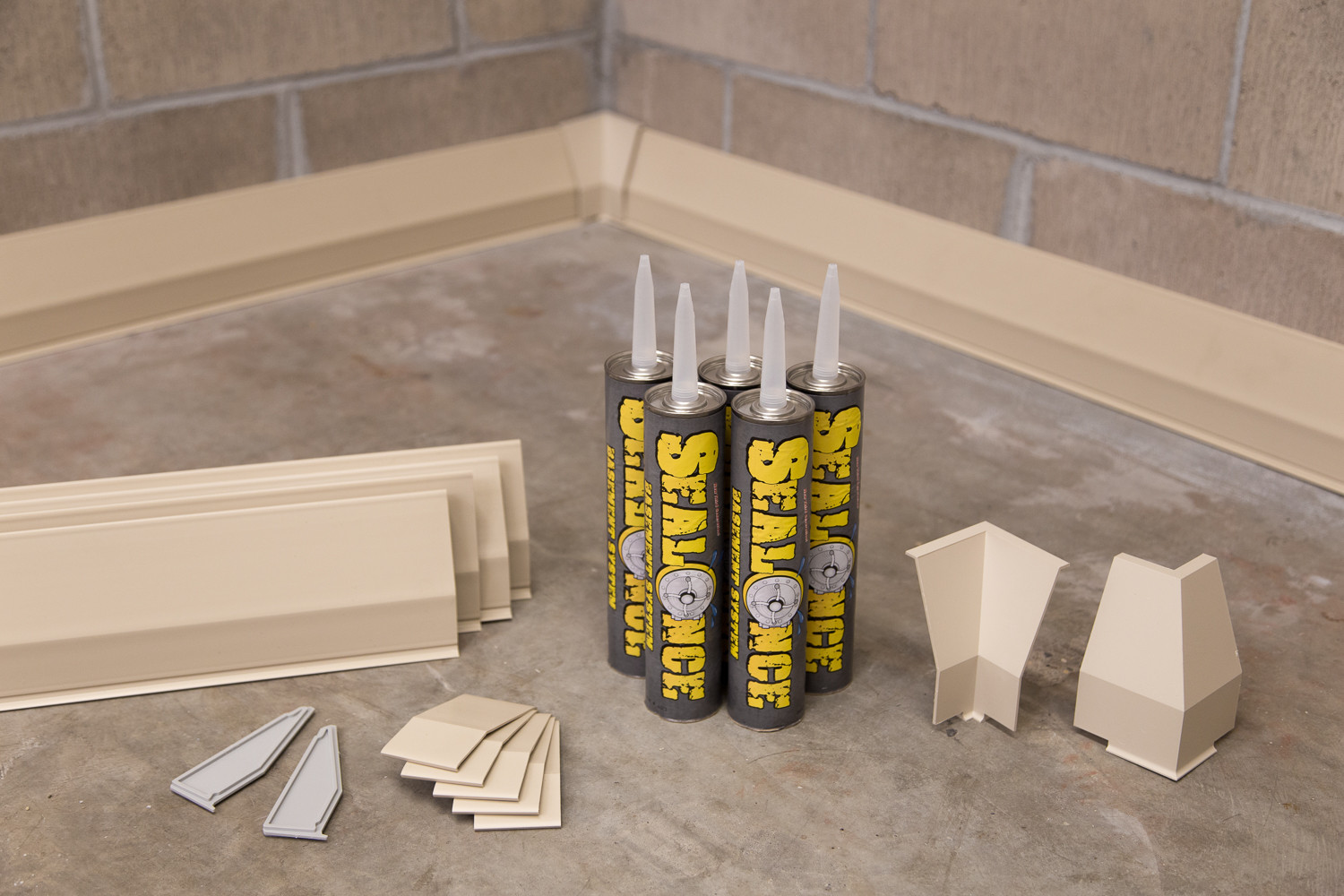 I'm a bit skeptical, but the cost is advertised at $6/ft, and at least it's a better solution than leaving the exposed weep holes. Worst case, you waste a few hundred dollars without changing anything that affects doing the job the conventional way later, if needed.

So moisture is either coming up from below (a rising water table) or its coming from the surrounding ground water in the saturated soil.

If it comes up from a rising water table, it will enter the living space from below through the crack between the foundation wall and slab.

If it comes from the surrounding ground water, it COULD enter the living space through the wall, especially if the exterior side of the foundation wall is not sealed properly.

Either way the moisture enters the living space it will need to be collected and disposed. I think the best way to collect it is on the exterior side of the foundation wall in drainrock and a perf pipe laid 6”-8” below the interior basement slab.

To keep the subsurface water from seeping through the wall, I recommend installing a moisture barrier on the exterior side of the foundation wall and install a 2” thick plastic mesh on the wall to allow water to flow down to the perfect pipe. If dirt is allowed to be backfilled against the wall, the dirt could hold the moisture giving it a chance to seep through the wall.

Once collected it needs to be disposed by extending a solid pipe over an embankment or in a collection well and pumped away.

Not the answer you're looking for? Browse other questions tagged french-drain or ask your own question.

4
French Drain with rubber mulch?
1
basement sump pump water level above drain tile
2
How can I prevent interior French Drain from further eroding soil under garage slab?
1
French drain - emitter or other water dispersal method?
1
How do I attach gutters to a french drain, does the perforated pipe need to run entire distance?
2
Water pressure from slope causing crack and lean in foundation. Is a French drain the answer?