On an old house (new to me and my partner) there are ~2' eaves extending all around the house, supported by knee braces made of 6"x6" beams and a few 2"x4"s. Inspecting the house, it was noted that on one edge of the house a knee brace had fallen off (appears to be a while ago and painted over, and the fallen knee brace is stored in the house). An inspector saw that the roof was in good condition, but because of the missing knee brace, one part of the eave along the flat edge of the roof was a little higher (as if the roof was swollen), explained as a result of the adjacent eave sinking slightly where the knee brace was missing. They explained reinstalling a knee brace where one was, and potentially adding more braces, should stabilize the eave in that area.

For a variety of reasons behind us now this hasn't been fixed yet, and snow season is upon us in northeast USA. Is there a DIY solution or at least patch for this, to avoid further eave sinking and potential roof damage this season? Or going with a pro, what price range should we expect? Getting a few estimates is always a good call but we're not sure how many carpenters we'll get out here to check it out, to get a proper fix before heavy snow falls. It seems difficult to reinstall the old knee brace, because a) the spot to install it is 2 stories high; b) the knee brace is heavy enough where it requires two hands just to place it carefully; and c) it isn't (yet) known exactly where and how far behind the siding there's a beam to bolt the knee brace on to, though other knee braces around the house give clues.

West facing wall, highlighting eave with braces and where one fell off on the norhtwestern wall edge. 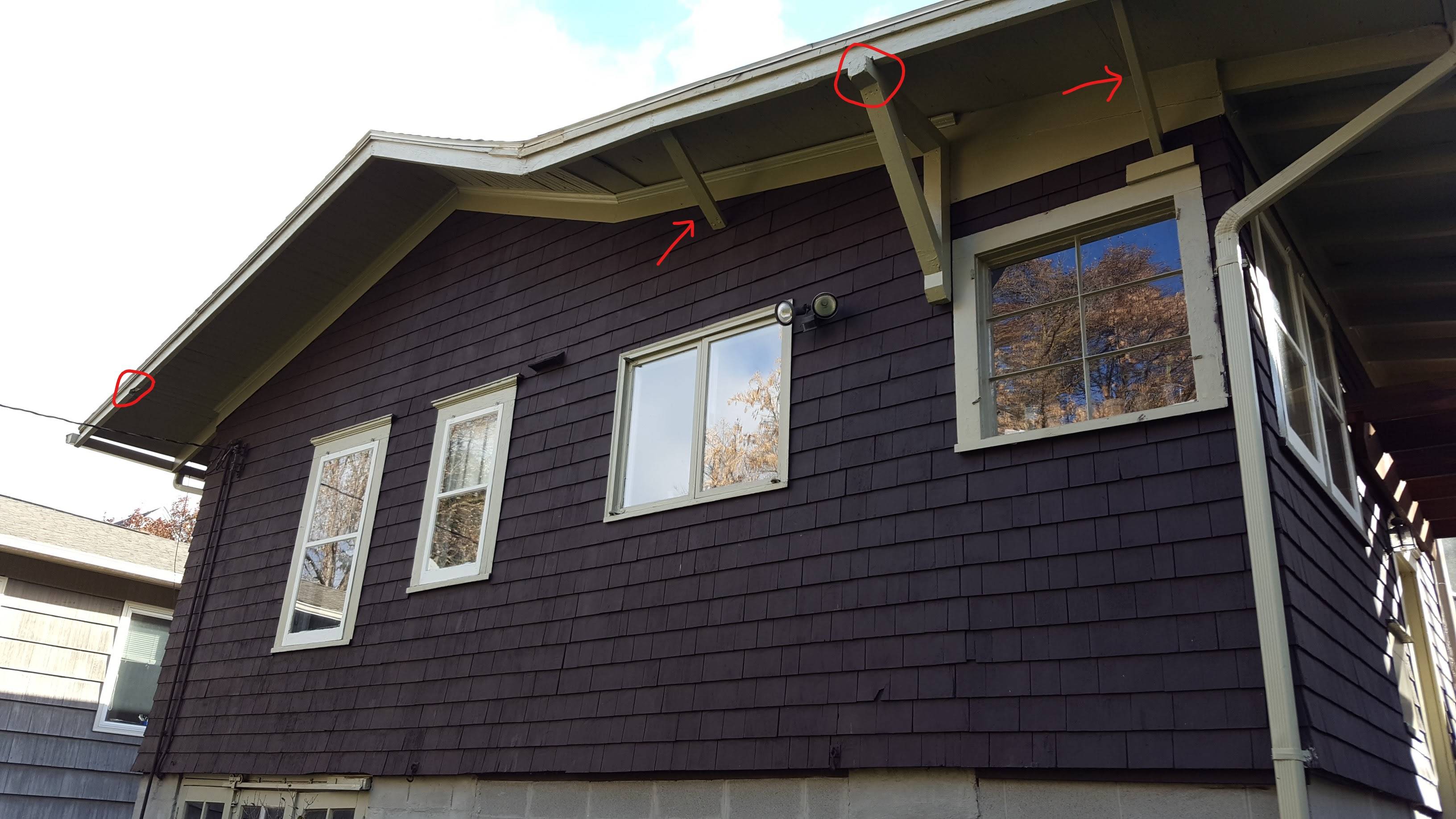 Fallen brace. Paint isn't in good shape but the wood there is solid. The piece of wood separate from the knee brace was stored in the same place, painted same color, and has a tare (inch of wood mising) along the grain in the back. 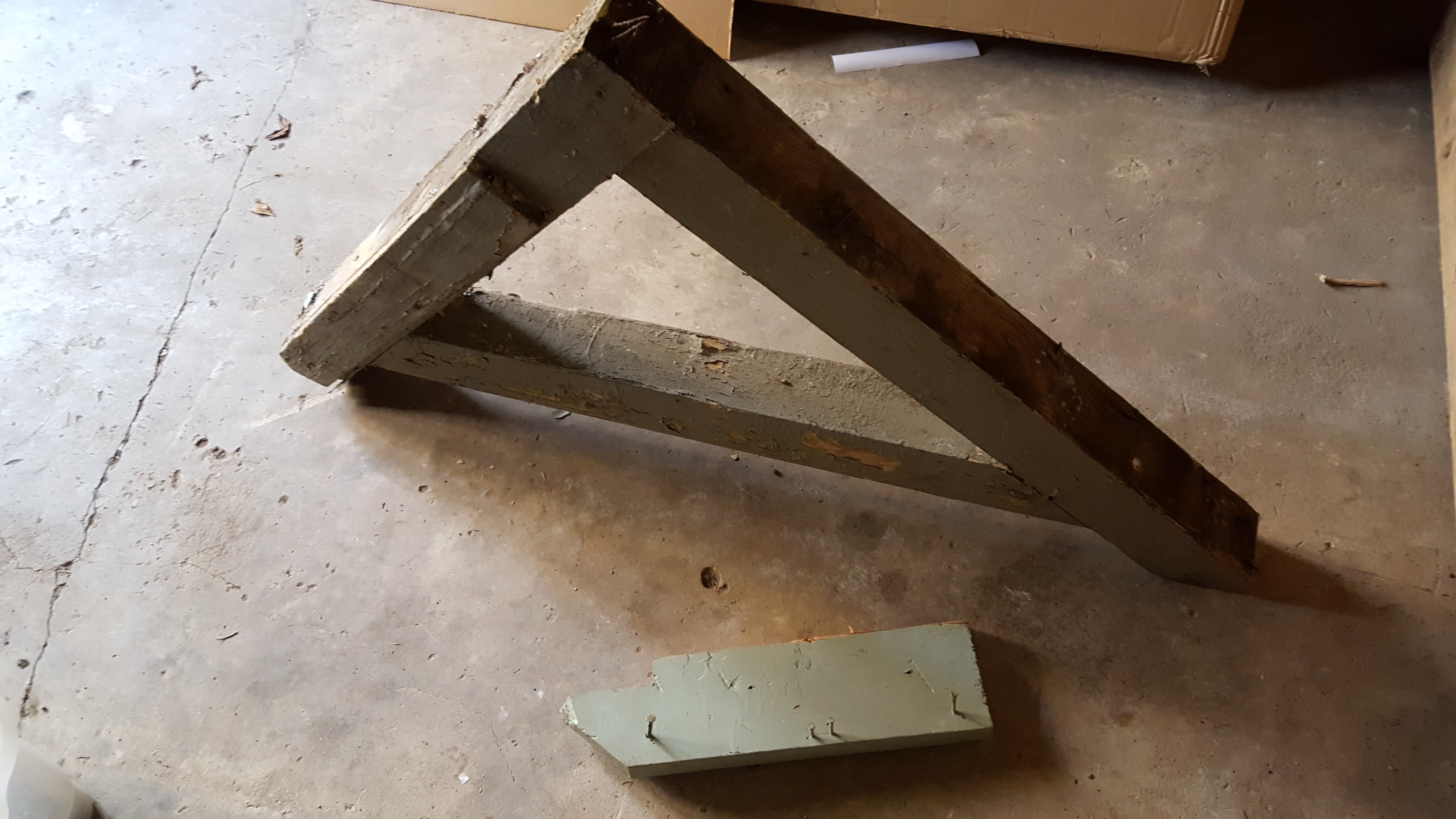 North side of roof, looking toward the northwest corner with missing eave. Note the swollen appearance under the satellite dish. 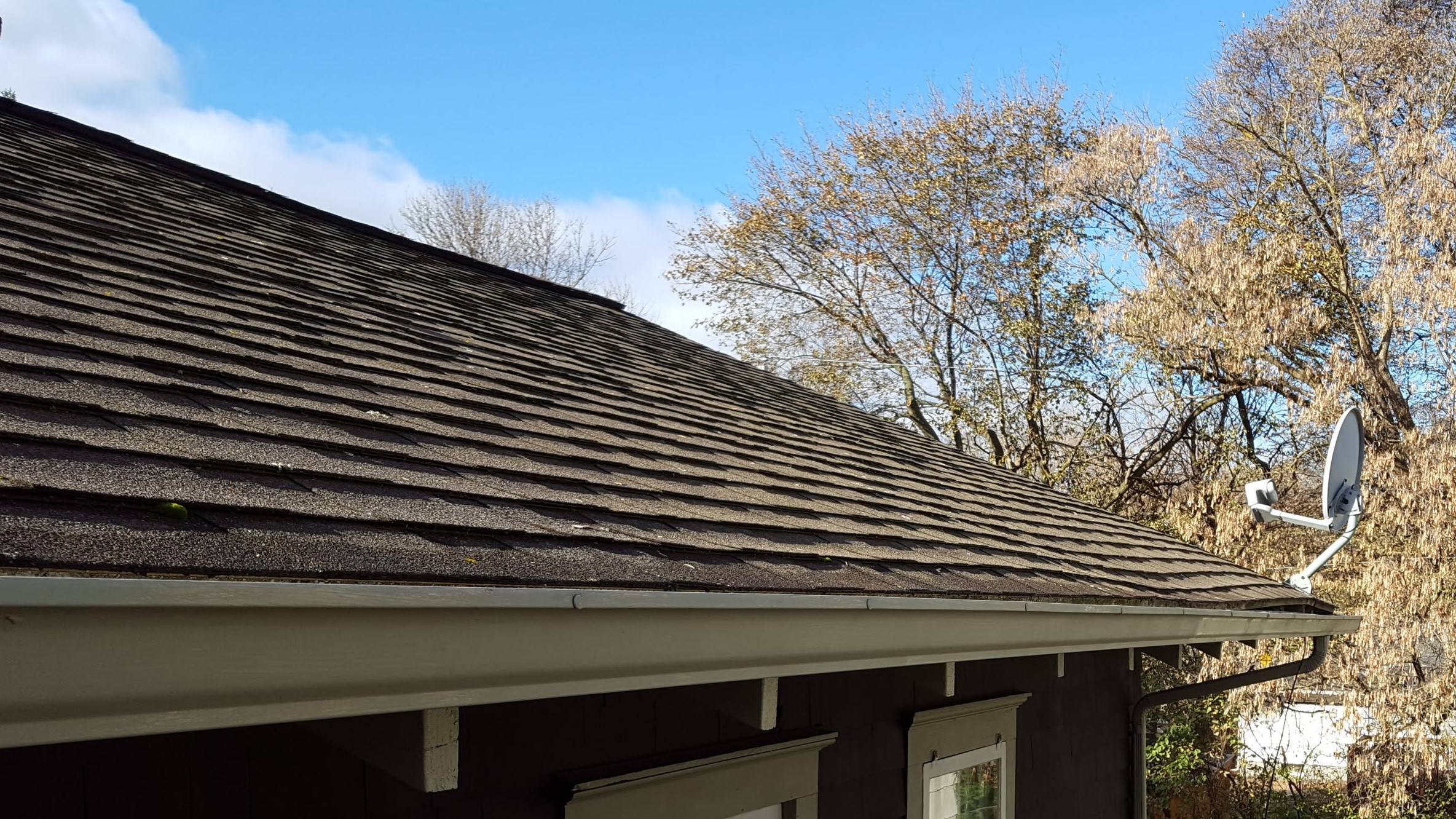 Another view of north-northwest side of roof. 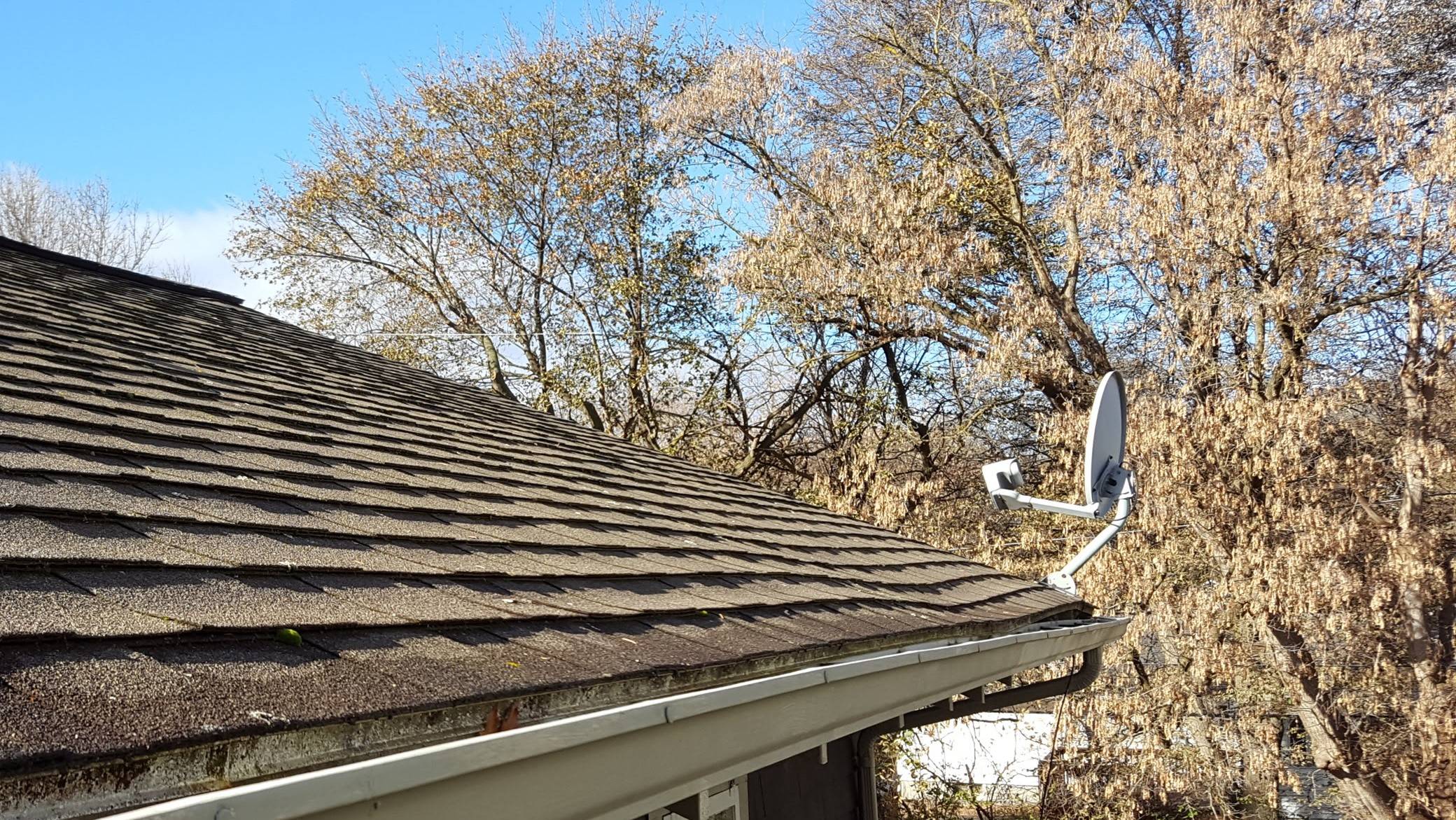 Zoom in of north-northwest roof. 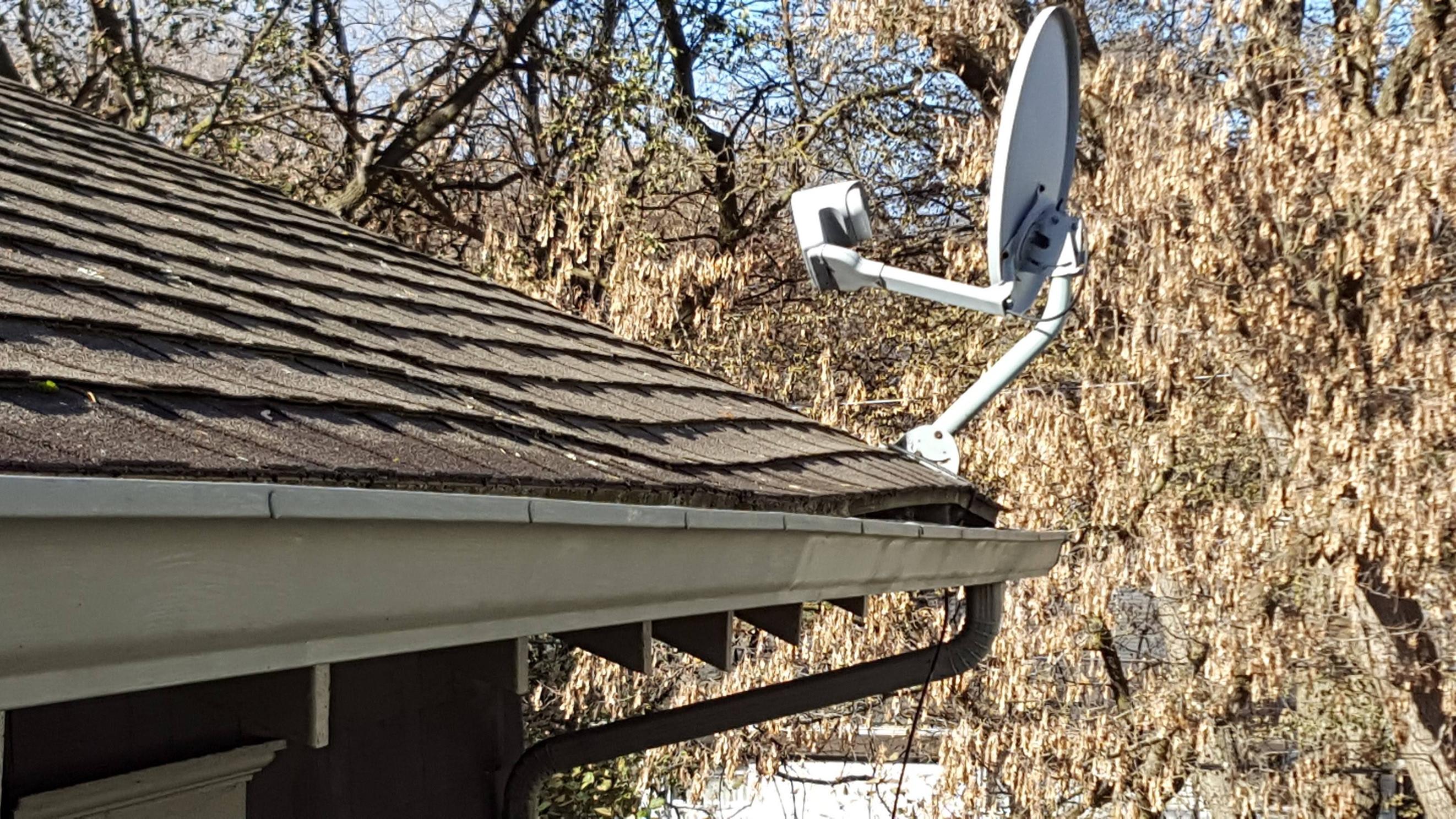 North side of roof looking northeast, to show more of roof line which should be (and is mostly) flat. Where there is a slight swelling to the east, there had been water damage in the past, but it was inspected and is dry on the inside and reinforced with sistered joists in that area). Rest of the house seems nice and dry too. 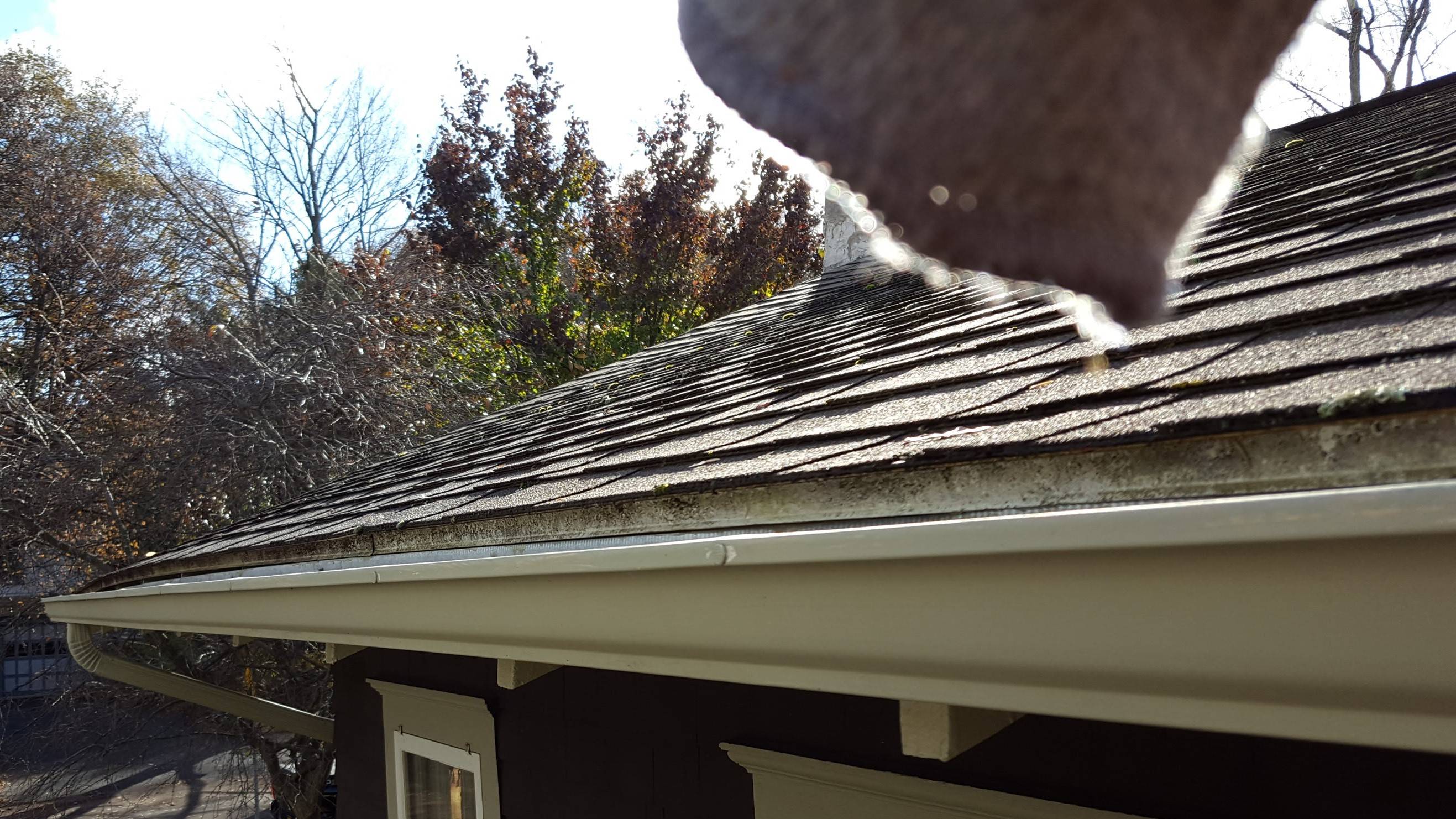 Northwest edge from the ground. 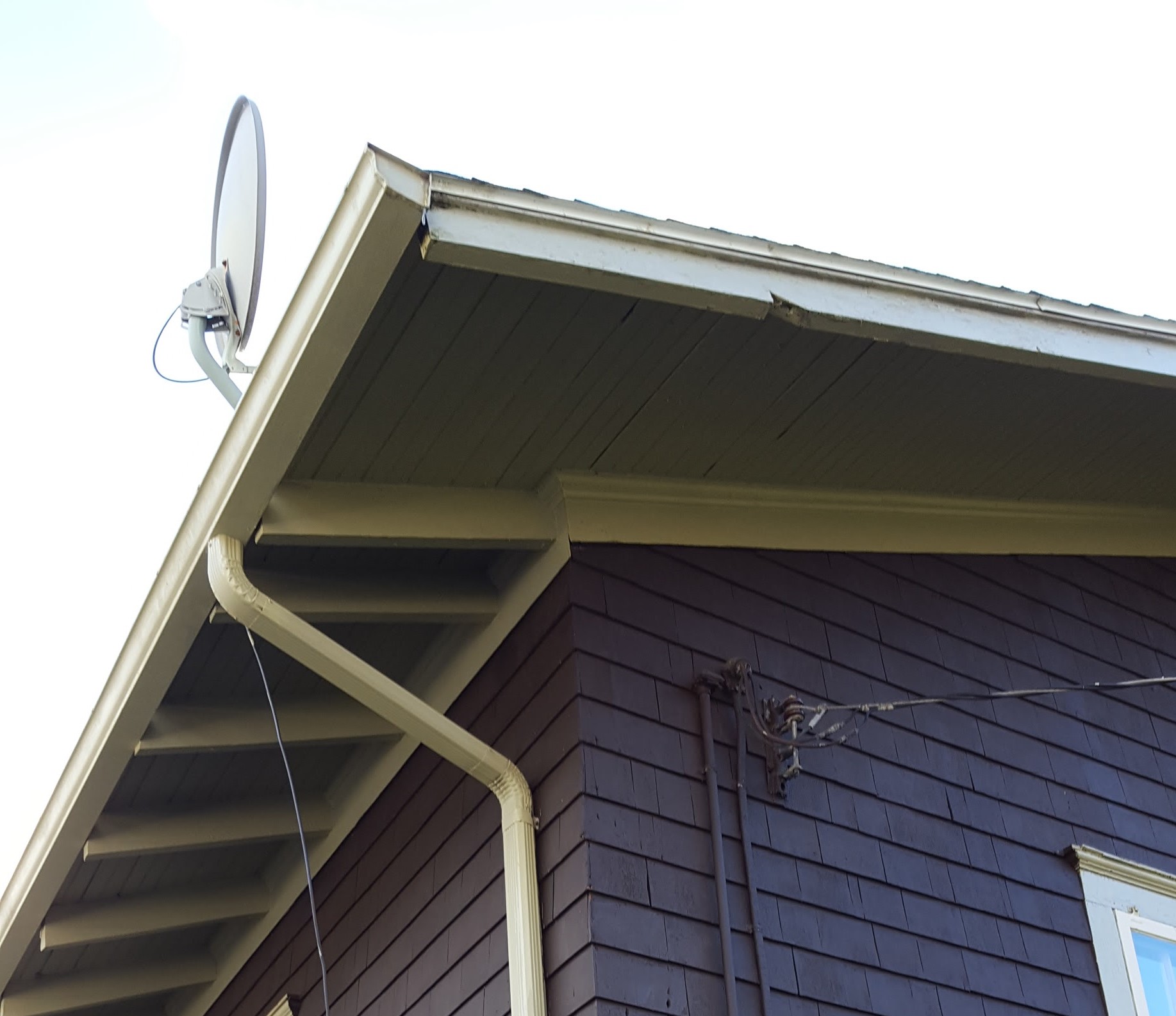 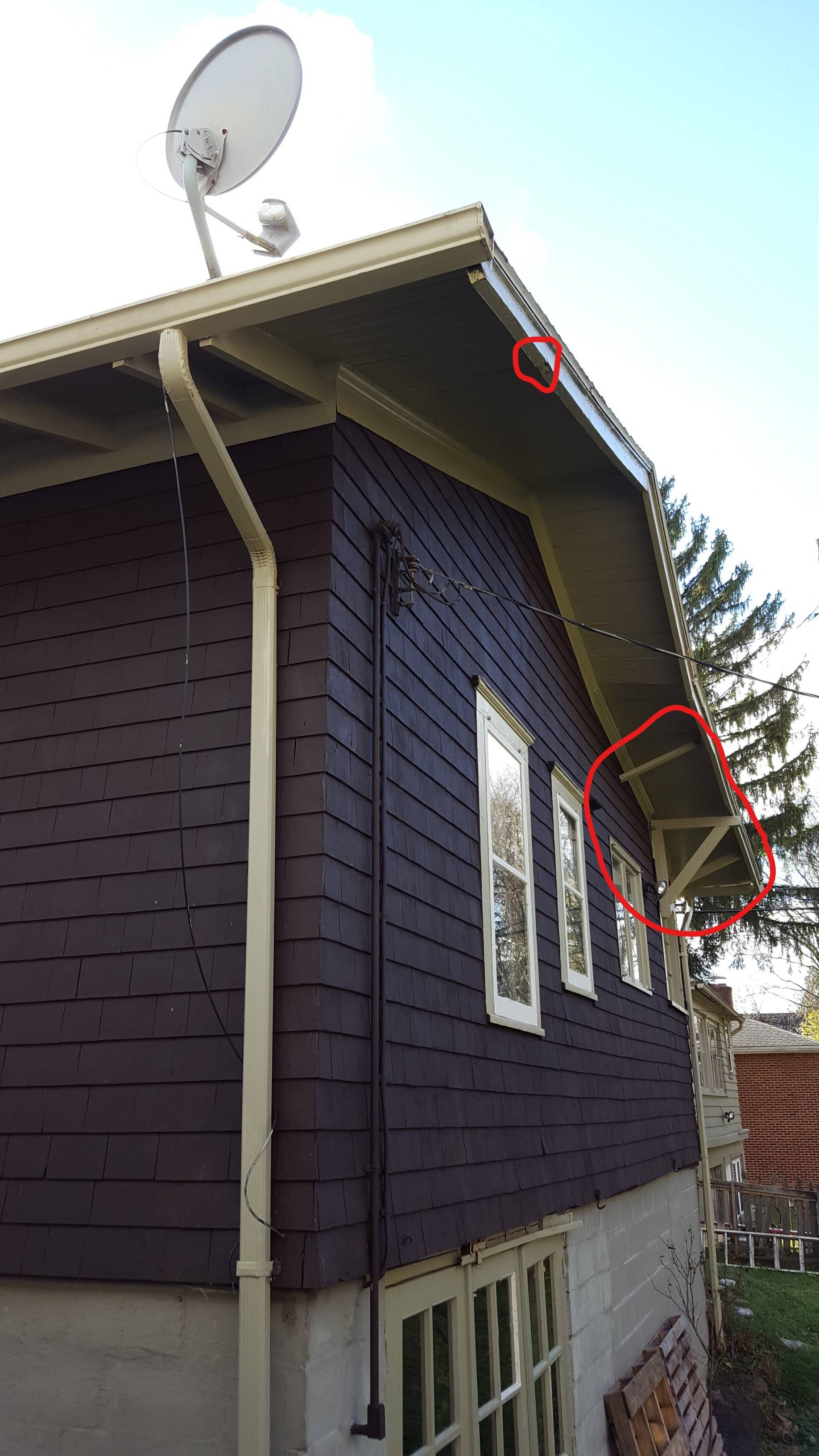 Hard to notice any of the differences in the eave's height from the ground. As you can see from above there is some up-and-down a few inches around that area of the roof where the brace is missing.

I'm choosing to use the answer location because here I have more space to write. I'm going to go out on a limb here, (by the way, great pictures. Makes a world of difference to actually see what we are talking about.) and suggest that the original roof design is inherently flawed. The overhang is just to long for the structural strength of the base roofing material. I still maintain that the knee braces are architectural design elements for appearance only. If they were the real thing, there would be a lot more of them. You can see where others, in the past, have jury rigged in make-shift supports, the single stick items.
My recommendations for the fix: #1 Simply cut the roof back to about 8". Reinstall the fascia, the asphalt roofing drip edge and any other design elements you would like. I believe the roof shows the strength to support this much. #2 Take this as an opportunity to design, build and install real support knee braces to match the original look of the house. They will have to be designed and built for strength and will have to be bolted through the exterior wall. Any good builder should be able to do this for you. He would be able to jack the roof back up to true horizontal. You could keep the original roof design. It would be structural strong. It would look great and last for 100-years. P.

If the knee brace has simply fallen from its original position then it was clearly never meant to support anything. These things are often uses as appearance items much the same way window shutters are used. It is understood that the shutters will never protect the windows, but still they go up for appearance. If you have a problem with the roof heaving and sagging, I suspect that the cause is something else. P.

Not the answer you're looking for? Browse other questions tagged roof structural diy-vs-pro snow or ask your own question.

12
How do I handle significant snow and ice dams on a 4/12 gable roof with ridge vents?
1
Attic Venting of Knee Wall in Cape Cod
3
How to calculate steel beam and posts size to replace existing wood beam in terrace
0
How do I get under shingles to replace the roof edge flashing?
3
Do these "rafter ties" tie anything together?
0
Properly flashing ledger board for pergola or overhanging patio roof
12
To rake or not to rake snow off of roof
0
Exhaust fan from ceiling is dropping water, but the roof might show a bigger problem