Is bottom support required for an aquarium stand? 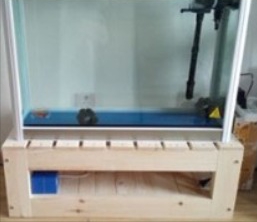 so, the question is whether required to have the bottom horizontal support?

I understand that the top horizontal support is required to spread the load.

The fact of the matter is that most of the time an aquarium doesn't have full edge support anyway. Given the extreme rigidity of glass, the center usually floats unless the stand's structure is extremely stiff itself, which would typically require steel and careful shimming. A wood rail flexes enough (if imperceptibly) that it offers virtually no support to the glass mid-span. The glass is quite strong in shear and carries the load itself.

If you support the four corners on a single plane you'll be fine. That is to say, if you set the empty aquarium in place and it doesn't rock on the diagonals, and if there's little or no jiggle in the stand, it should be ok.

For many years I've built stands for my 55 gallon aquarium and smaller ones using two stacks of concrete cinderblocks and two boards laying on them. This means that the aquarium is really only fully supported at two points (at 25% and 75% of the length), and I've had no issues.

Not the answer you're looking for? Browse other questions tagged wood or ask your own question.

5
How do I prevent doors on a media cabinet from sagging?
0
How can I build a shelf to support a 15 gallon aquarium?
5
Where can I find information on making footbridges with a long span?
2
Will 1x4's and 1x6's be enough for an aquarium stand?
0
What's the right type of lumber to construct a small TV platform?
0
Can I calculate beam size if I know length, and weight support requirements?
0
7/8 hole through boxed joists
0
How do I attach a wooden post to existing concrete steps?
2
Proper window header for 6-foot window & understanding the span tables?