How can I resurface concrete sidewalks for easier cleaning?

Have been power-washing our associations walkways for 13 years and they are getting rougher and black algae is getting harder to get them clean.

What can we do to resurface the walkways that down the road will make our situation even worse?

The pressure washer erodes some of the surface. The rougher surface is safer for walking (less likely to get slippery when wet), but it also gives mold, algae, and lichen a better foothold. Once they get established, they embed themselves in pores, micro-cracks, and other imperfections below the surface. Getting rid of it by pressure washing requires eroding more and more of the surface, which compounds the problem.

Independent of resurfacing, you need to first get rid of the growth. Chemical treatment is a better long-term solution than pressure washing because it doesn't keep making the surface more susceptible, and some chemicals will help to prevent regrowth.

There are a number of disinfectant cleaners based on benzalkonium chloride, such as "Wet and Forget" or "Spray and Forget". These are often sold as concentrates that you dilute to about 2% active ingredients. Those products are pricey, but the same ingredients are used to kill algae in swimming pools, and is much less expensive. For example: 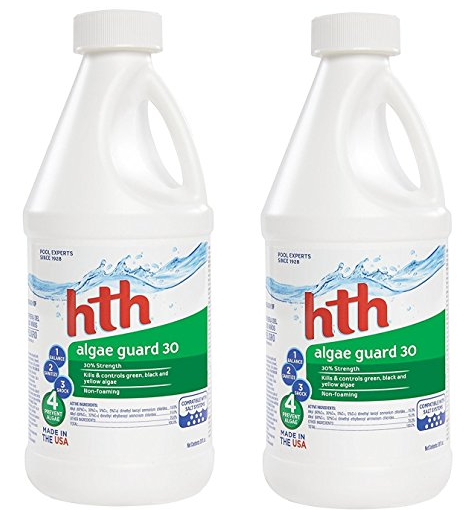 This is a 30% concentrate that you dilute to 2%, so it goes a long way. If the problem is mold or algae, you spray the surface to saturate it. If there is also lichen, you respray the surface a second time while it is still wet from the first spray.

You don't rinse it off or scrub, just let it soak in and dry. It is very slow acting. It can take days to weeks to kill the growth. Weather then washes away the dead material over time (months). They recommend not pressure washing it because supposedly, residual disinfectant gets redissolved by rain and kills deeper layers of growth. A treatment is supposed to prevent new growth for a year, so once you get rid of it, repeat a single treatment once a year.

There are lots of other chemicals that will kill it. For example:

As Ecnerwal notes in a comment, don't randomly mix cleaning chemicals. Some, like ammonia and chlorine bleach, create toxic gas when mixed. Even when used alone in these concentrations, you should wear protective gear when spraying or handling many of these materials as they can damage or irritate your lungs, eyes, or skin, and at least the chlorine bleach will also do a number on your clothing.

I don't recommend trying to seal the surface. I'm currently dealing with a previously sealed surface. The sealant worked great for a number of years. Nasty stuff is now growing under the sealant, and the sealant blocks all chemical treatments.

As far as resurfacing, you could polish the surface, but that would be dangerous for walking and wouldn't make a big difference at this point as far as growth. You might be able to bond a new surface layer to the top that contains growth-inhibiting material, but that isn't likely to hold up long-term.

The "best" solution is probably to use chemicals to kill what's there and leave a growth inhibitor. Then once a year, pressure wash at a low pressure to clean off the surface without eroding more concrete. Let it thoroughly dry, then re-treat it with a growth inhibitor.

Not the answer you're looking for? Browse other questions tagged concrete cleaning or ask your own question.