I cleaned off some loose plaster (which was evidently a patch) around hairline cracks and I found this. The 2 holes actually contained bricks which were glued in with plaster (I saved the bricks). 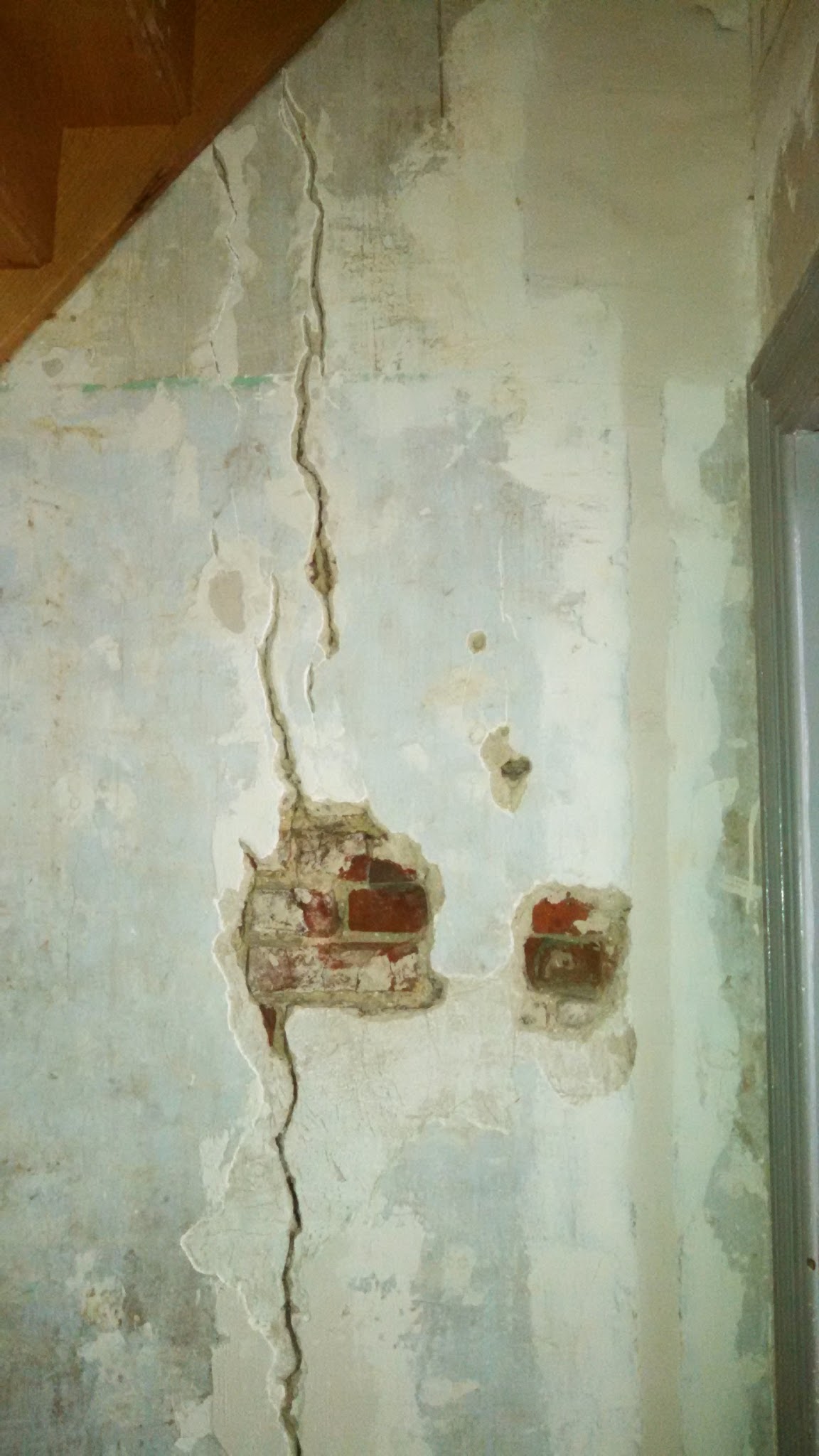 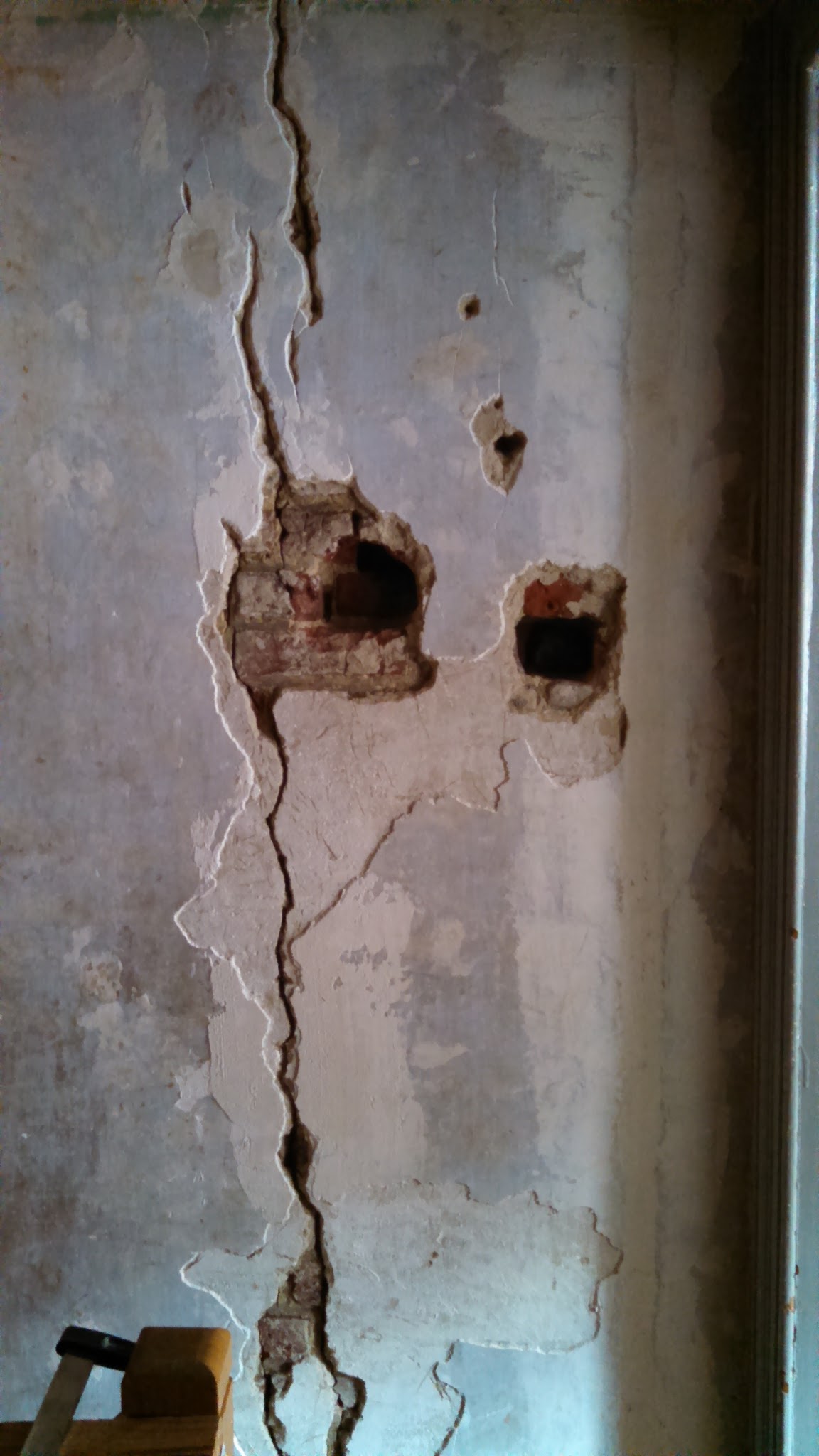 The holes in the brick wall had a lot of brick dust in them as well. The hole on the left contained only one brick, behind that brick you can see more hole. This hole contained a large amount of brick pieces and dust and no brick. I do no know how far it extends; I can get a folding rule in directed upwards for 20 cm, but it might block at that point due to the angle. 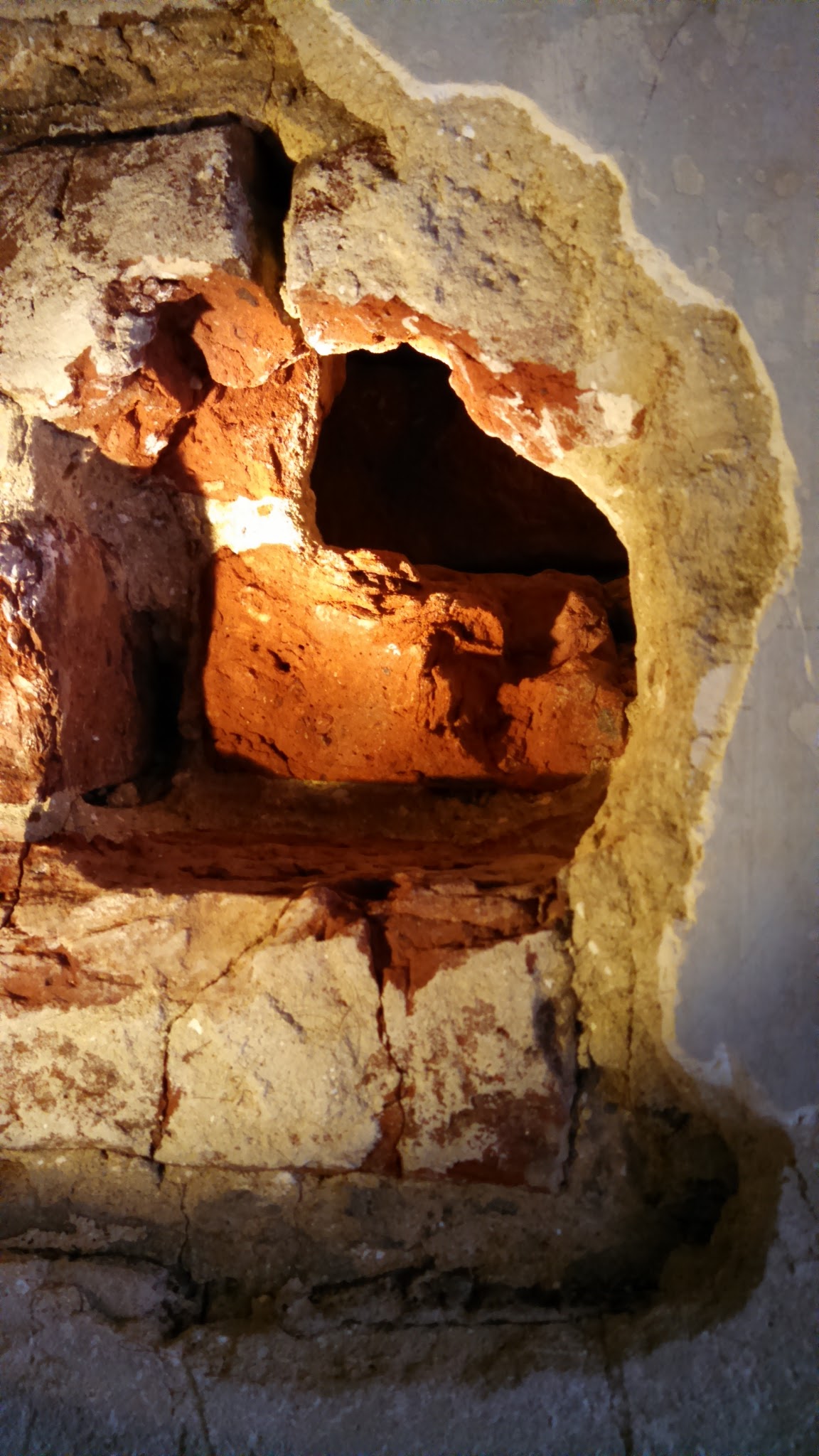 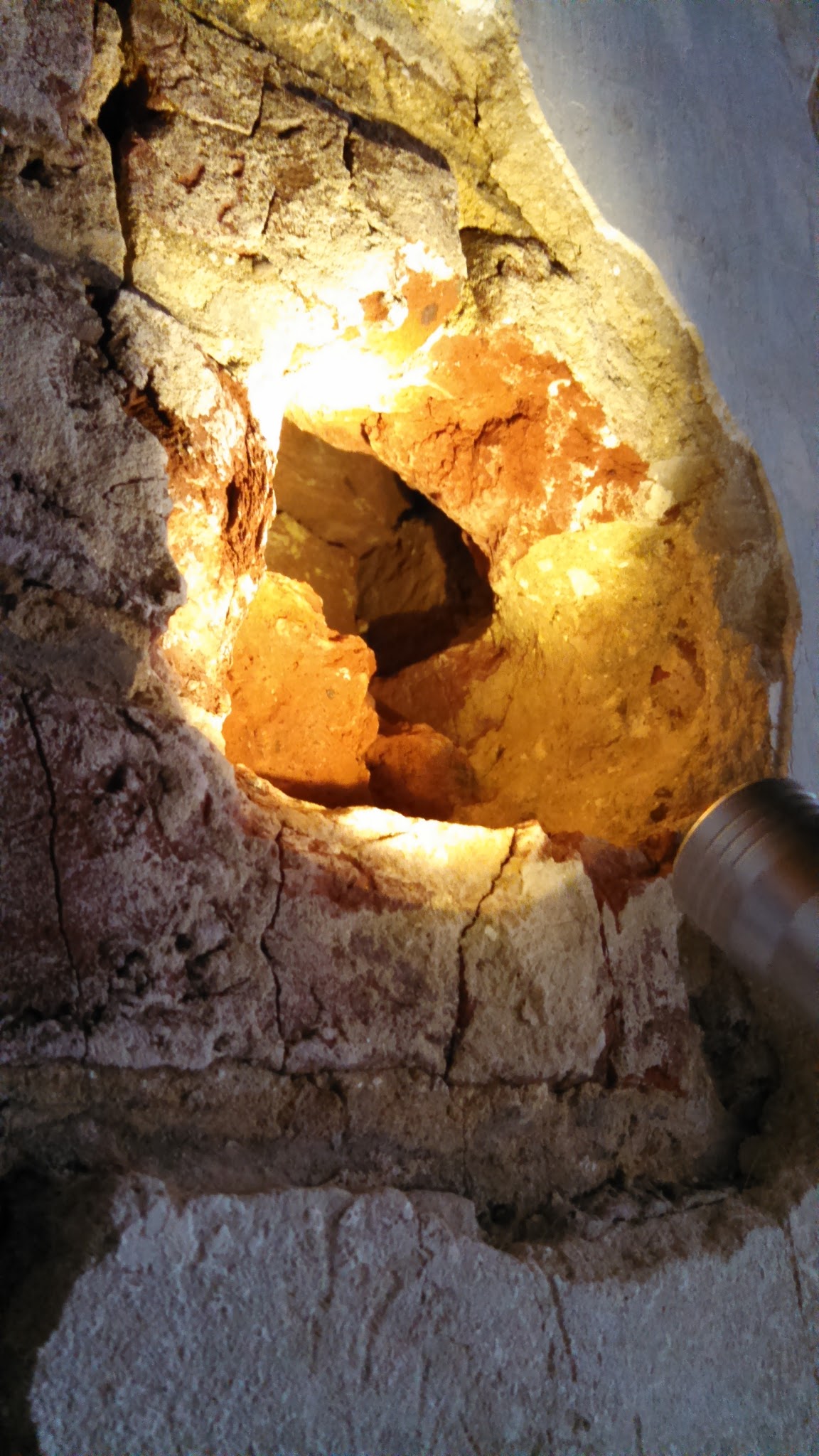 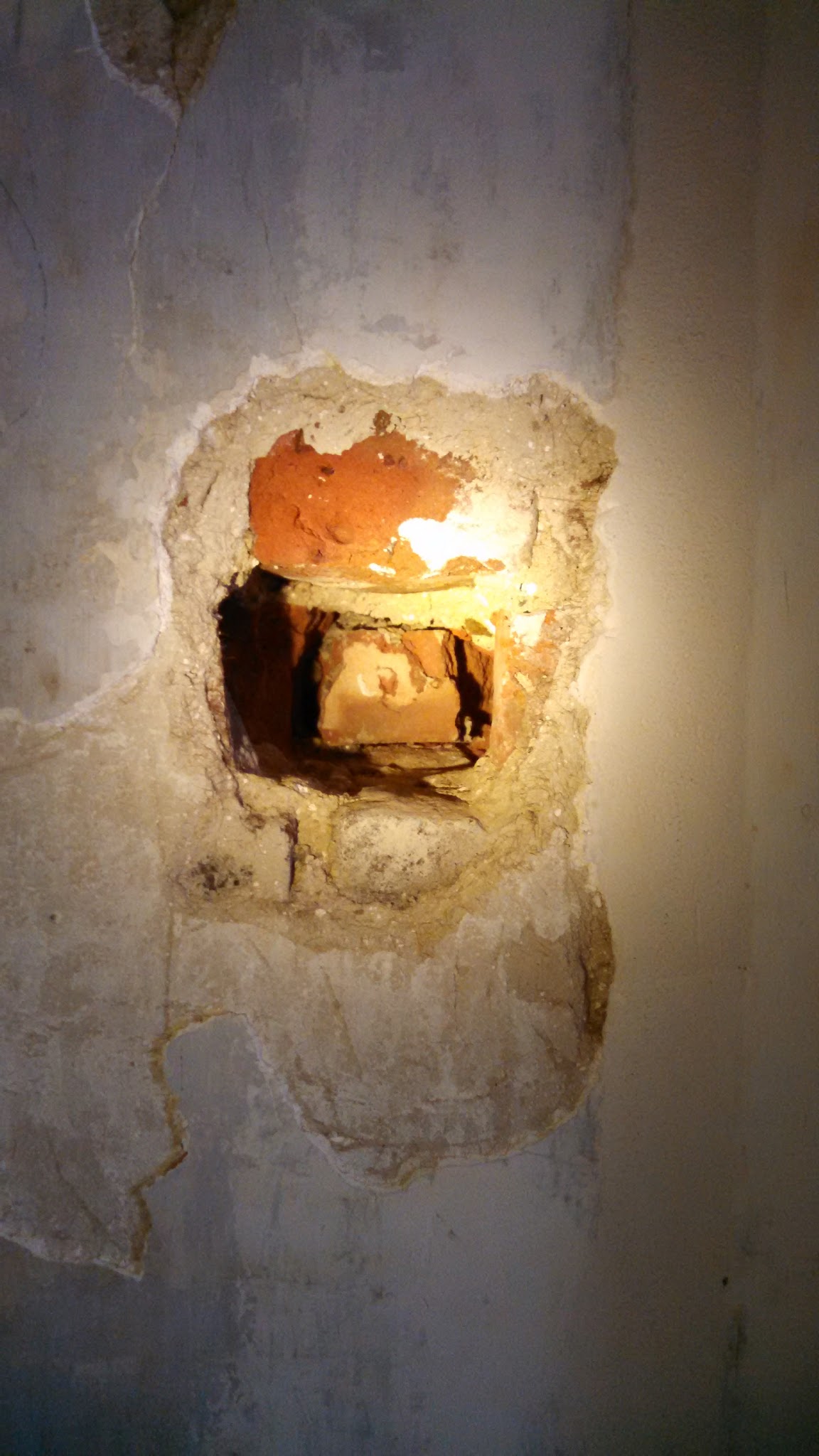 The wall is a supporting wall of a row house and is very old (build around 1900). Most other houses in the area were built later, including the houses that share a wall with this one. The area has suffered burning and bombardment during the 2 world wars. From what we can tell, the bricks in the wall are of inconsistent quality: some are brittle and prone to crumbling into dust, some are hard as concrete.

Based on when I bought the house and the information I received from the previous owner, the crack must have been patched 8 - 15 years ago. The patch was rather shoddy: just a single layer of plaster, pushed somehwat into the crack and spread around it on the surface. There are no signs of patching with mortar or of replacing bricks.

Yes, get a STRUCTURAL engineer (not a CIVIL engineer) or an architect to look at the wall and do not cover anything up until he/she sees it. (Just pictures won’t do.) They’ll need to see in the inspection holes.

Yes, it’s a structural issue and it’s serious and it’s going to be expensive to fix. The good news is: it’s just the wall, it’s not the foundation. (The crack is vertical, not diagonal and there is just one.)

When this wall was built, we didn’t know as much as we know now about building materials. That wall needs some reinforcement at the crack. This wall is built by stacking various types of bricks and blocks up...but no reinforcement. Bricks are good in compression, but terrible in tension. When the wall moves, and all walls move, it creates compression and tension. Reinforcing is needed to withstand the tension in the wall.

Not the answer you're looking for? Browse other questions tagged repair walls brick structural or ask your own question.

0
How to cut opening in double brick wall
3
How can I patch a hole in this brick wall?
2
What would cause the mortar to crack across a number of bricks?
1
Is a cracked brick sign of a deeper problem
5
How can I accurately locate bricks covered in stucco or plaster?
3
Move or remove a downspout inside brick wall
0
House with many cracked external wall bricks
1
Should I seal a brick chimney breast on party wall