I am remodeling my bathroom in a home built around 1995. I have a fan/light/heater unit in the ceiling that is operated by three wall switches. There is a separate switch next to the 3-switch box that operates the vanity light. I am attaching a drawing showing the wiring that goes to the fan in the attic, and the wiring that goes to the switches on the wall in the bathroom.

What I would like to do is replace the existing combo fan with a fan-only fan, plus add two areas of led recessed lights (ceiling and shower niche)with dimmer switches. Obviously, I would like to use existing switch wiring, and make modifications in attic to accomplish this, but I am at a loss. Is there any hope for this frustrated "electrician"? 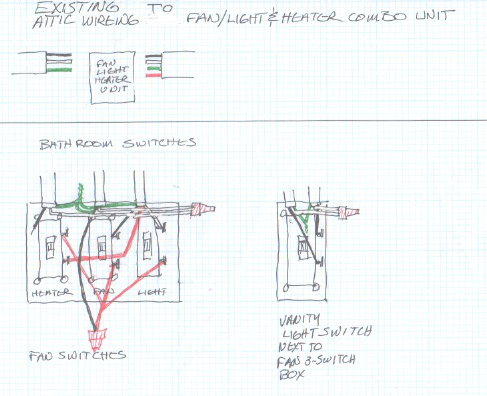 OK so one problem at a time.

First, the fan/heater/light. They did a big cheat when they wired it, and violated the "all currents must be equal in a cable" rule. Current goes up the right cable [to heater(red), fan(black) or light(white!)] and then returns on the left cable. No no no no!

Also, I like color codes for purpose: black for always-hot, red for switched-hot, blue for alternate switched-hot, etc. You don't have a choice in cable, but you can mark wires with tape, and I'll ask you to. Always mark both ends of a wire the same way. As an aside, if there's a neutral in cable, it must be white.

It appears the center cable is the power supply, so it is already correctly colored: black for always-hot and white for neutral.

Where the black fans off to the 3 switches, is fine. Please tape the red wires black since they are always hot. And if you are OCD, on the left switch, exchange wires so always-hot is on the bottom like the others. Thanks.

Since you are deprecating the heater, you can do this now. The left cable can continue to be ignored. The right cable will be redesignated:

Move the white wire from cable 3 into the neutral wirenutted bundle, blue(black) on the top of the "light" switch. The left cable can be ignored, leave its neutral in the bundle since we'll use it soon.

Up in the fan unit, disconnect the neutral from the left cable and cap off both its wires. All connections there are to the right cable. You can do this right now, and I recommend you do even while you continue the old combo fan in service. Later, when you install the LEDs, you'll use only the blue (fan) and white (neutral) for the fan, and fork off the red (light) and white (neutral) for one of the sets of LEDs.

That was easy. Magic of colored tape!

One of the two sets of LEDs can easily be powered using the red and white wires that went up to the fan. Extend some /2 cable to the new LED location.

The left cable becomes the power for the other LED. Its white wire stays in the neutral bundle and land its black wire (recolor it orange or yellow, whatever you have tape for) on the remaining switch.

However, I really don't like 120V power inside a shower/tub area. Also LED dimming with 120V products doesn't work nearly as well as 12V dimming.

DC makes a lot of sense if you can procure the parts (and we're not a shopping site, so we can't help there.) LED dimming works much better on DC, and DC is not a hazardous voltage.

In this case, I would retask the black/white of the left cable to power the fan only, via the left switch. All 3 of the wires from the right cable will be disconnected from the AC power system entirely.

It's hard to go into more detail without looking at the particulars of the hardware you end up going with, so this is the point to ask another question.

The center cable appears to be your hot feed to the box.

The cable on the left should use the black wire to feed one of your loads and the white wire as the neutral for that load.

The red and black of the cable on the right can be used for the other two loads but the white wire should be the neutral for just those two loads.

They used the white wire on the right cable as a hot wire and as Harper pointed out that is illegal. They should have used it as a neutral and used the black wire on the left as the 3rd hot wire and that white as the neutral for just that load.

Good luck with your project!

Not the answer you're looking for? Browse other questions tagged electrical bathroom switch ceiling ceiling-fan or ask your own question.