So I have a wall I would like to remove in my house (see picture 1-3). I did some exploratory surgery (aka cut holes) in the drywall to see what I was dealing with. This wall is running parallel to the floor joists above (see picture 4): score +1 for being non-load bearing.

However there is a large double 2X10 header above the entry way (see picture 4) in this wall supported by a jack stud on either end (see picture 5): score +1 for being load bearing.

I thought long and hard at what this might possibly be supporting. The house is two stories resting on a concrete block foundation (so three floors if you count the basement). The floor in question is on the middle/first/ground floor. Above this wall I want to remove, is another wall on the second floor offset by ~4 inches from the joist directly above the wall I would like to remove on the first floor. The wall above on the second floor is definitely supporting a portion of an A-frame (not truss) roof above (see picture 6). So is it possible that the wall I want to remove with the header on the first floor is also helping support the roof through the wall on the second floor?

To simplify: my question has two parts:

1) Is this a load bearing wall?

2) If the wall is load bearing, how would I temporarily support the joist above (to install a longer spanned header) since it is running parallel to the floor joists above?

*Update 8/7/18 I ended up knocking this wall out with no issues. I dont believe the wall was load bearing because there were 2 sistered 2X10 above this wall with a span of 9 feet between supports I put in a LAM beam adjacent the overhead joists just to be safe. Now there's two sistered 2X10s with another 2 sistered 2X10 Lams up there. I'm sure this was overkill. 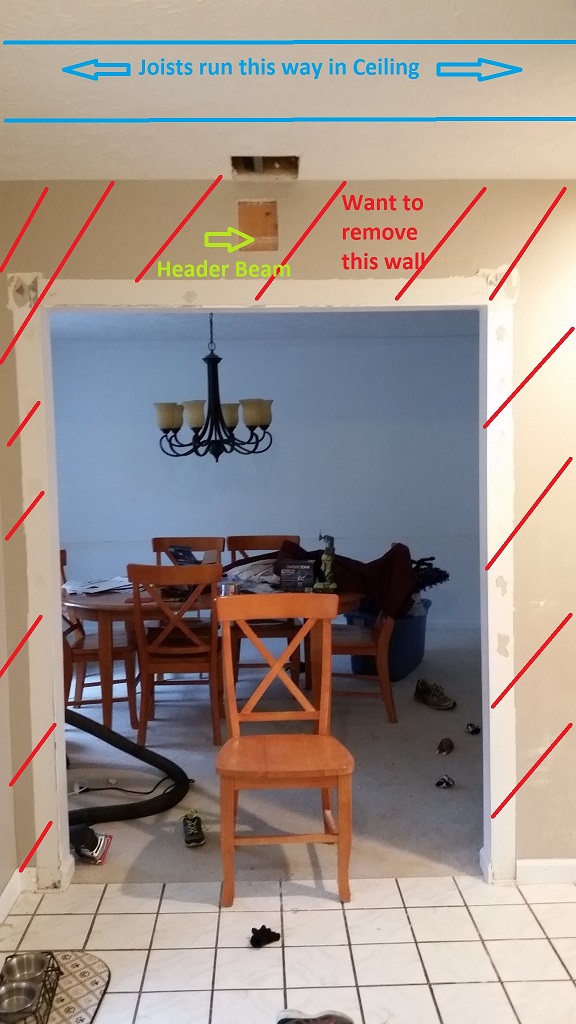 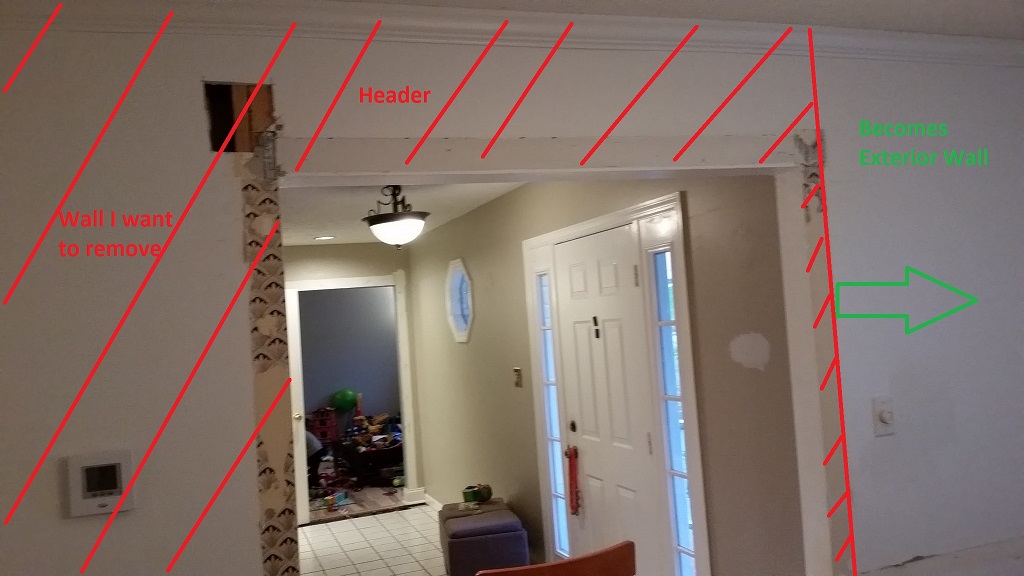 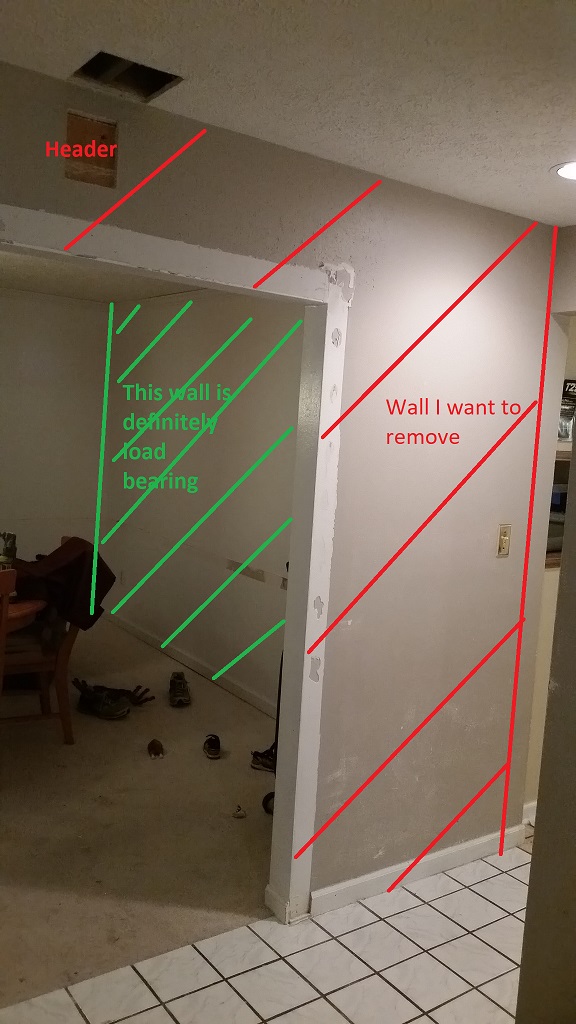 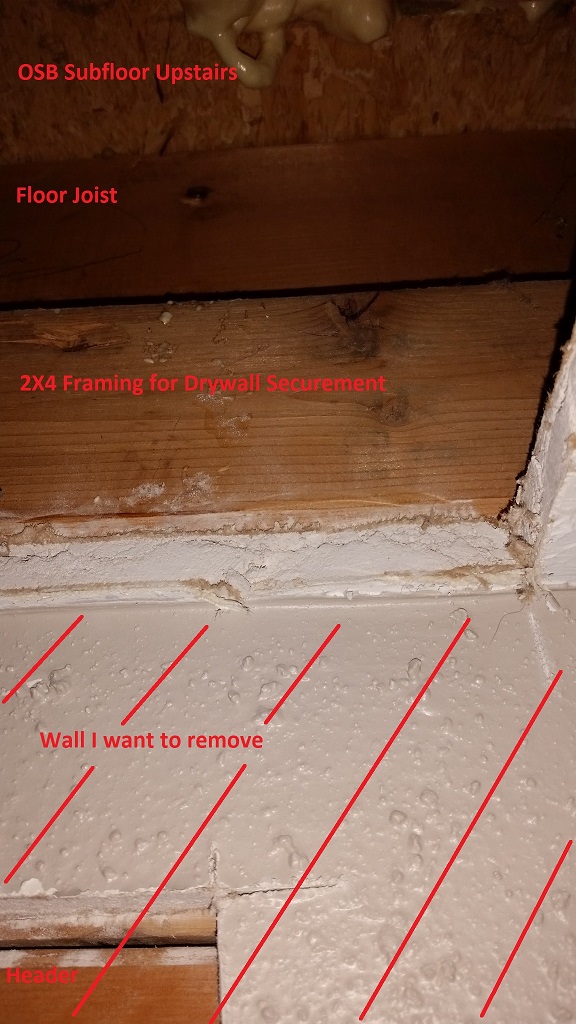 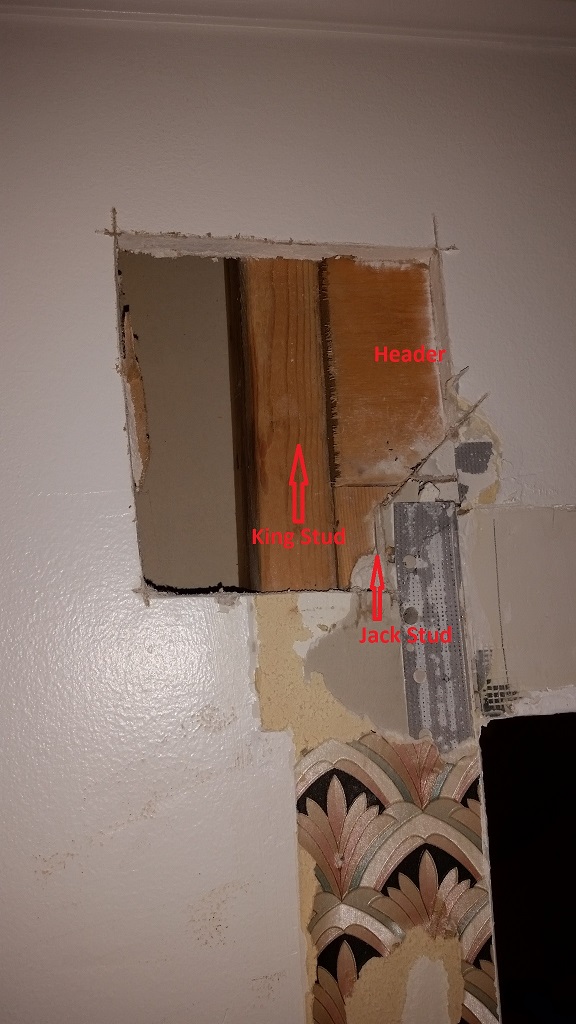 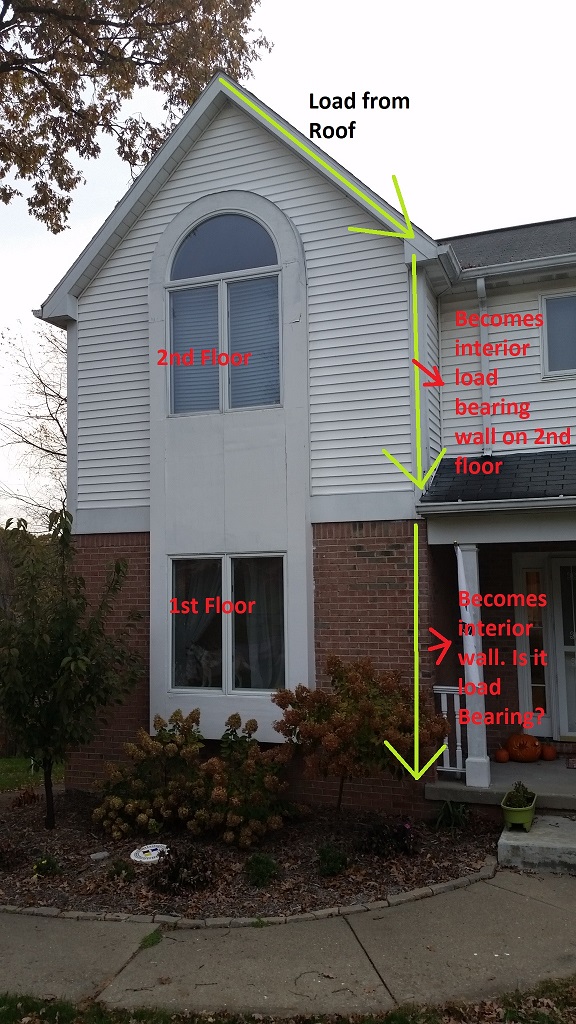 Picture 2 clearly shows the relation of front door to “wall I want to remove”. The wall you want to remove is a bearing wall ... supporting the roof as shown in last Picture #7, from the exterior.

That one small opening you’ve cut in the ceiling in Pictures #1 and #3 shows something spanning the opposite direction you’re indicating the joists run. You’d better check that again, as I suspect you’re wrong on the direction the second floor joists span too.

Also, when you start removing walls (bearing or otherwise) you’d better make sure you’re not removing a shear wall. Just because it doesn’t have plywood on it, doesn’t mean it’s not a shear wall. Gypsum board is rated as shear panels too and this is a main wall, so I suspect this is a shear wall...depending on what seismic zone you live in.

I like your opening comment, “...before hiring a structural engineer/ architect...”. Now make sure you do it...

By the way, I’d recommend a STRUCTURAL engineer, not a CIVIL engineer...or an architect with a structural background.

Not the answer you're looking for? Browse other questions tagged structural load or ask your own question.