I am doing some renovations in my basement and noticed that the metal columns aren't centered on one main beam but centered on the gap between two beams. You can see it in the picture below (with the wood block above it splitting in the middle I might add) 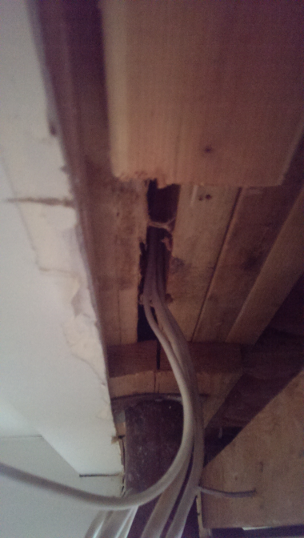 Shouldn't the metal column be centered on one main beam instead of spanning two? Or is there a reason why it would be spanning two beams? It is a modular home, if that makes a difference.

This other photo is a picture farther down, just showing that the gap spans the entire length of the house. The other beam is centered on it as well. 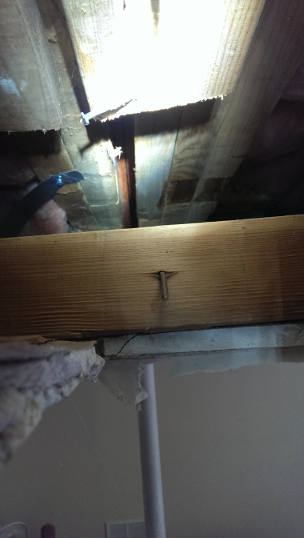 The house was built in 2004. I'm wondering if they did something "unique" here that I should be concerned about.

It is okay for a steel column to support two separate beams, but the steel plate on the top of your column isn't designed to do that.

The builder should have added a column cap on top of the column, and I suggest adding one now. You basically need to jack up both beams so you have a small gap, and then push the column cap in there and release the jacks. If that's something that sounds way over your head, a remodeling contractor should have experience doing stuff like that.

It looks like you have a 2 ply beam, then a 1" gap, then a 3 ply beam. Is that correct? That should be around 8.5" wide, and a Simpson CCOQ9-SDS2.5 is 8.875" wide so that should work here. People usually weld this to the top of the steel plate on the column, but however you attach it to the column will be better than what you currently have.

The column cap I referenced is 1/4" thick (3 gauge steel), so that's enough of a height difference that you would probably want to replace the steel column with a shorter one, and also center it better while you're replacing it. You could probably cut 1/4" off your current one and weld the column cap to it, but just do whatever is easier or seems safer. On the other hand, raising everything 1/4" might not be a big deal to you.

Not the answer you're looking for? Browse other questions tagged basement structural load-bearing or ask your own question.

0
replace load bearing post with steel column
2
What kind of board can span 16 ft for a wall pergola
1
Why are two columns holding up this support beam?
0
Steel basement columns have rusted and split open
3
What size beam should be used for a 15' patio cover span?
2
Is there a standardized way of calculating load bearing of beams with connections notching the beam?
0
Reason for no header spanning this load bearing wall?
0
Why were these load bearing walls not stacked?
0
Alternative designs for a load bearing wall