Is there a device that can clamp around the outside of an insulated electric line (without contacting the copper) and identify the breaker that controls it by sending a signal through the insulation into the wire?

A thick black wire, diameter about that of a hot dog, goes into the ground near our front porch and travels towards the street. I believe it must have supplied power to a lamp-post that was original to the house, built in the 1940s. The lamp-post is no longer there, and I never saw it, but they're a common feature of the houses in my neighborhood. The electrical supply from the street is on a utility pole that connects up near the eaves and comes down to the meter box.

So, when digging a hole to plant a bush a few feet away from the porch, I did so very gingerly, and found the wire there again, about 6 inches below the surface. Then, when planting a second bush closer to the sidewalk, in an existing rock-garden, I encountered the wire yet again. But there was also a more modern 14-2 style supply line next to it. I have no idea where this newer wire comes from, or where it terminates.

I have a Klein non-contact style tester. If these wires are hot, the Klein should give me a rapid beeping sound, according to the manufacturer's website. I've tested it indoors on a 12-2 and a 14-2 wire, both known to be hot, and it does give a rapid beep when held against their outer insulation. Testing the outdoor wires, it just gives a slow pulse beep.

Another device I have lets me trace a wire back to the breaker box, but it uses alligator clips that attach to the copper. Is there some device that can clamp around the outside of the insulation and do the same thing?

Yes, a professional tracer tool that has either an inductive feature or an inductive clamp will work. The inductive feature is used by placing the tool in close proximity to the wire, while the inductive clamp is typically an accessory that you place around the wire you're tracing to insert the signal. It doesn't matter if the circuit is energized or not. Unfortunately these tools are expensive, so you might want to find someone you can borrow from or a tool center you can rent it from. People that would have access to these tools would be ones that work with or around underground utilities, so for example I know an excavator that has one of these. Other uses for these tools are finding underground irrigation and breaks in invisible dog fence wires if that helps your search.

Ideal makes one for about $1200: https://www.idealind.com/ideal-electrical/us/en/products/test-measurement/circuit-tracers/suretrace-circuit-tracer-61-959.aspx

Schonstedt also makes a few different ones that would work: https://www.schonstedt.com/

And here is an instruction manual on how to use the Schonstedt features: http://gfretwell.com/electrical/howtofindcablemanual_06.pdf 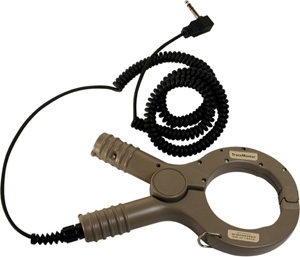 They're called toning devices and you can find them commercially. All you need is access to one end of the wire. The toner comes with two parts: the tone generator (typically the larger part) and the detection wand.

I've not done this with electrical wires directly, but it should work. I'd turn the whole panel off and hook the tone generator to the wires in the panel, one by one, to find out if that wire is the one. Someone else will be outside with the wand to tell if/when you find the wire.

1
Where in the breaker box should I terminate the neutral wire from my dryer circuit?
2
Need help wiring switches with several wires
0
How do you hard wire a lamp socket to the ceiling?
3
How to deal with this pair of wires coming out of transformer?
1
3 way switch four wires
1
Neutral 14 ga wires hot
2
Abandoned lamp post wire causing breaker to trip
1
Securing 3-3-3-5 SER at sub panel entrance
1
Need neutral wire on “smart z-wave” wall switch - don't have one