How should plywood sheathing be detailed around bolts/bearing plates in seismic retrofit work?

The City of Los Angeles standard planset for seismic retrofits shows the anchor bolt's bearing plate (washer) resting on the sill plate (vs. resting on the 2x blocking of the shear wall). But there is no guidance on how to cut the plywood to clear the bearing plate and nut where it interferes.

Can I assume that this cut is not a significant detail? The planset does specify radiused cuts (minimum 1 1/16" radius) for other intrusions into the bracing plywood.

From the planset--anchor bearing plate on sill plate, and radiused cuts shown for intrusions ("DO NOT SQUARE CUT"): 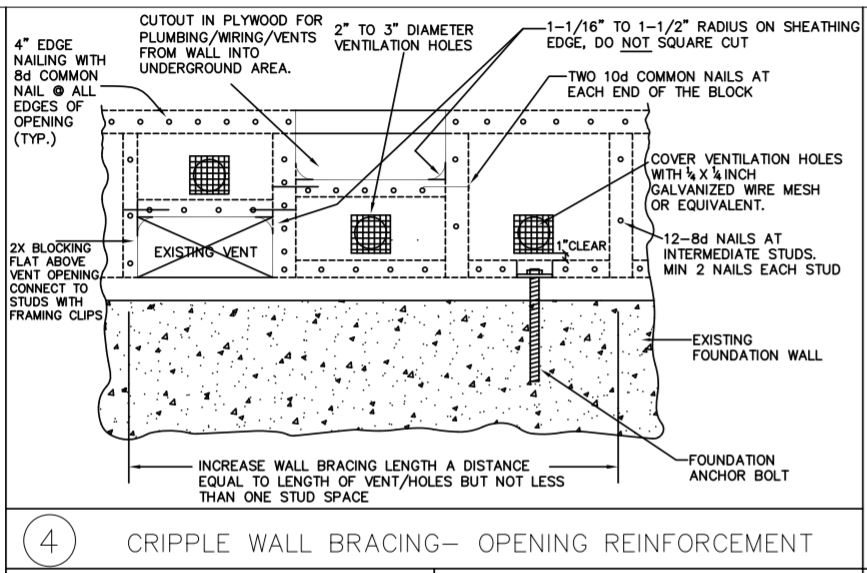 Bolt clearly interferes with sheathing in side view: 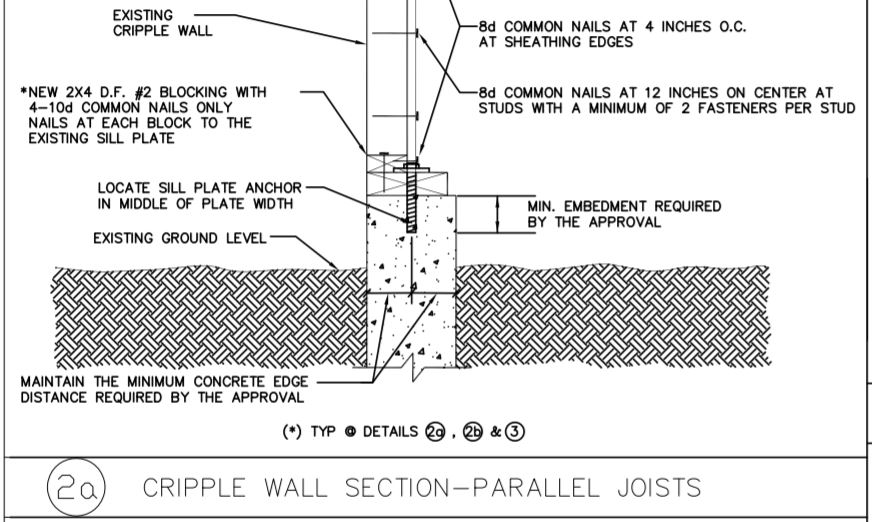 You may be able to replace the regular square bearing plate (which features a hole in the center) with a bearing plate featuring a diagonal slot. This slot permits the bearing plate to be placed off-center of the bolt, perhaps enough to prevent any interference with the sheathing. Simpson Strong-Tie makes a couple different slotted bearing plates for this purpose, models BPS and LBPS.

Note that a 'standard cut washer' must be placed between the nut and the bearing plate when using diagonally slotted bearing plates. The washer will help ensure contact with the bolt. The idea is that oversized bolt holes (or slots in this case) allow the mudsill to get some momentum during a quake as it moves horizontally. You want to minimize this slop, which can help prevent the mudsill from splitting under seismic forces. That is why Plan Set A and similar plans call for a maximum of 1/16" oversize for bolt holes (though certain Simpson Strong Tie adhesives call for larger holes, which is OK). Anyway, pick a large round galvanized standard washer where the hole is just big enough for the bolt to pass through. You still need the bearing plate as well.

If that won't do, another option is adding a horizontal 2x4 across the stud bay just above the bolt and nailing to that (cutting away sheathing below this horizontal, using radius cuts in the two upper corners, similar to a cut-out for a crawl space vent). Cutouts like this diminish the shear capacity, requiring an adjoining stud bay to be sheathed as well.

You could also take the drastic step of sawing off the bolts and replacing them with Simpson URFP foundation plates. But that is costly and time consuming.

A slight shallow radius cut could be made in the bottom edge of the sheathing to clear the square bearing plate. Such cuts should be slight so they do not interfere with the nailing pattern where the sheathing meets the mud sill. This is not an ideal solution, but may be your best bet if slotted bearing plates or replacing the bolt are not options.

Whatever you do, confirm with local code authorities. The FEMA Plan Set is another good reference, as are the shear wall and earthquake retrofit books by Thor Matteson, which mention this situation.

Not the answer you're looking for? Browse other questions tagged foundation anchor sheathing or ask your own question.

0
Roof Decking: Plywood/OSB over skip sheathing (decking) or should I strip to the rafters?
3
Joists have different height