I have removed a duplex receptacle and now, my other receptacles don't work. After removal, I capped each wire separately and that was all! Why did removing one outlet cause others to stop working? Thanks

Duplex outlets are usually installed in a daisy chained string.

If you want to remove one without affecting the others, you should observe carefully what wires are attached to where before disconnecting.

Make sure the breakaway tab has NOT been broken away as that would indicate a special situation: 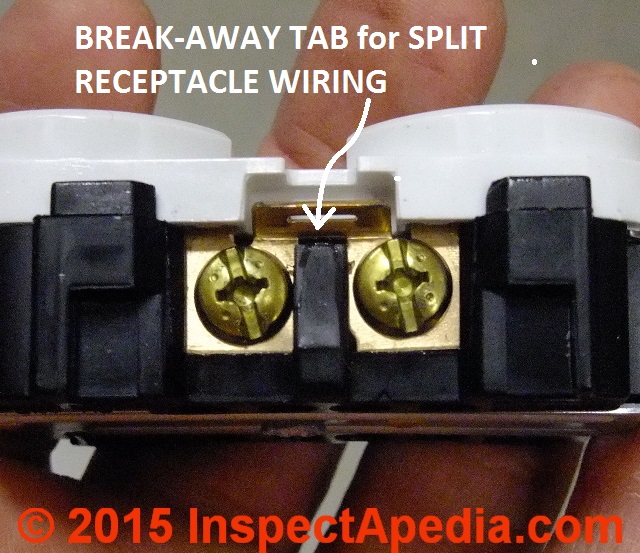 Then use a wire nut to join the black wires that were under the brass screws or in their corresponding stab-lock holes.

Then use a wire nut to join the white wires that were under the silver screws or in their corresponding stab-lock holes.

That should restore service to the downstream outlets.

Alternately you might consider a solution OTHER than removing the outlet. You can obtain 'recessed' outlets from most home supply stores, if the outlet you removed is in the way.

Remember, it's not legal to drywall patch over and fill in an outlet box. So if you remove the outlet you will have to put a cover plate on that will stick out just as much. Flush outlets will probably have less of a bump to them.

Because you were using a combo receptacle + splice block

If it had only been a receptacle, it would only need one hot wire and one neutral wire. An example of such a creature is a GFCI.

However, there was more than one of each, wasn't there? It also provided a splicing block to connect other wires which served other loads.

I get where this is not "intuitive", but this is a common shortcut used on receptacles. The two screws/stabs need to be there for other reasons sometimes, so they did a design trick of design that lets you use them as a splice block the rest of the time.

One more thing. There are a few places where using a receptacle as a junction block is bad. That is in cases where the circuit must remain intact even if the receptacle/device is removed -- notice how the grounding wire is already a pigtail, that is one example. Another is the neutral wire in a multi-wire branch circuit, where another circuit is depending on that neutral. In those cases, neutrals (and always grounds) must be pigtailed. If you pigtailed everything, that wouldn't be wrong... the receptacle-as-junction-block is only a convenience.

Not the answer you're looking for? Browse other questions tagged receptacle removal or ask your own question.

0
Circuit rewired to accept 5th receptacle
4
Outlet with ground wire attached to socket ground and neutral
1
How to turn this switched duplex receptacle into half-hot
1
Capped off outlets and light switch wiring, now no power to half the house
0
Outlets are half voltage and/or don't work
1
Electrician strangely cut and capped hot wire of receptacle
4
Can this junction box wiring be used for a duplex receptacle?
2
Replacing receptacles and found 14 AWG in a 20 amp circuit. Advice?
0
Rewiring switched ceiling lights and outlet switched top receptacle to switched ceiling lights and always on outlet