I have two light switches that I would like to combine to one. See image. On the left is my existing setup, on the right is what I am thinking of doing (apologies, I never learned proper electrical diagramming). Both light switches are on the same circuit breaker.

What I gather from a similar question is that I can just cap one of the incoming wires, which I assume, is either A or C? This would mean that my idea (right diagram) is incorrect?

If that were the case, would I also cap the ground and white neutral wires from the same line?

EDIT: So I have since learned after testing the wires, that only A is hot. C was a separate light switch in another room, so it needed an uninterrupted line going to it. This still makes my diagram work.

I figured it out. I tested which wires were hot and it turns out that only the black wire in A was hot. C is going to another light switch in another room so it needed an uninterrupted line.

My diagram on the right worked!

You can buy and I recommend that you get what is called a 'stack' switch. When you remove the tab on the line side of this switch it will now handle two completely separate and isolated switching functions. Now just pass the two switch legs through this switch. Now with one single device you can switch two items. Don't change anything on the neutrals, 'whites' and all the grounds should all go together. Hope this helps. Good Luck.

Your diagram looks just fine to me. I am assuming that C comes from the breaker panel, and that the diagram represents a single electrical box which houses the two switches.

Only the black wires are changing. It's very straightforward.

Make sure your dimmer switch is designed to handle the amount of current (watts) and design (incandescent, florescent, etc) of whatever it is you're dimming.

Assuming you are starting with two separate switches in a 2-gang box, and depending on what style or model of dimmer you go with, you can get a wallplate which will blank-out the second gang, ala: 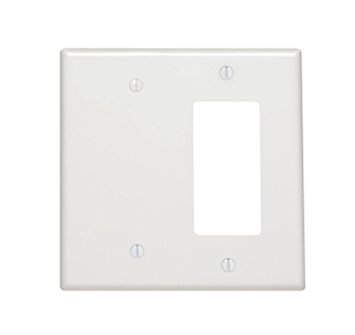