What is the purpose of the tube connecting to the overflow pipe in my toilet tank?

My dual flush toilet was leaking; this is what the connections looked like before I "fixed" it: 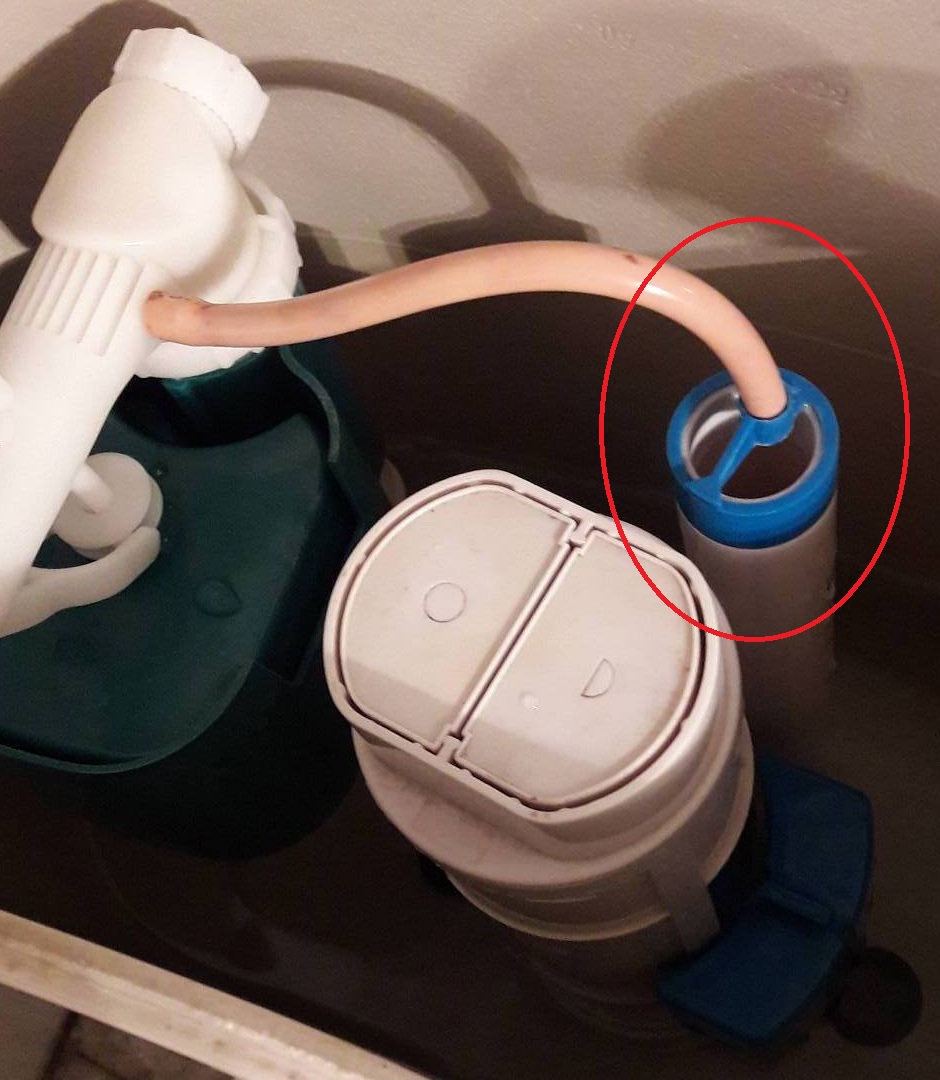 Notice the ivory-yellow hose is connected to the blue-plastic fitting on the overflow tube.

In response to my asking my brother how to stop the leak, he told me to remove the hose from the blue-plastic fitting, and let its flow go into the tank. To my amazement this worked; it stopped leaking. But I wonder what the hose is supposed to do there, and what was the effect of our disconnecting it from its original fitting? And, by the way, I have found that if we just plug or pinch the hose, don't let water run out of the hose, everything works well. So what is the role of this hose?

Based on my experience with USA model single flush toilets, if you would take a pitcher of water and pour it down that vertical tube (called the overflow tube), you would see water going down into the bowl of the toilet, bypassing the flapper valve.

When the toilet refills after being flushed and the flapper valve is closed, most of the water goes into the tank (cistern) but some goes through that plastic hose into the overflow tube and into the bowl. I assume this is to insure that the bowl has enough water to seal the S-drain in the toilet. When the valve shuts off the water flow, this stream of water should stop. If the flow of water out the tube does not stop, then there is a fault in the valve.

The one way I can think of that pulling this hose out of the overflow tube could "stop" the leak would be if the extra water in the toilet would cause more compression of the seal in the valve and so actually shut off the water, but this seems improbable.

If I had this situation, I would consider changing the main seal in the valve, but this operation could go wrong and damage the valve.

EDIT If you leave the hose out of the overflow tube, you should notice that the bowl has a lower water level in it. If you would decide to just use it that way, you could keep a pitcher of water on hand and as the toilet is refilling (or after), gently add just enough water to the bowl to bring it over the lip to seal out sewer smells. If you add the water too rapidly, then you would start the siphon action which would pull too much water out of the bowl.

If you would plug or pinch the little hose in question, then it will become pressurized something which it is not designed for. Also parts of the flow valve could be improperly pressurized. This might eventually rupture the hose or the valve assembly.

Not the answer you're looking for? Browse other questions tagged plumbing water leak toilet or ask your own question.

2
Showerhead with "backflow prevention"
2
Is my toilet refill issue more likely a problem with the fill valve or supply pipe?
2
Toilet tank slow to refill (bowl refills normally)...bad overflow tube?
30
Purpose of Fill Valve Tube Going into Overflow Drain
2
What kind of toilet tank is this?
2
How can I figure out where the toilet overflow pipe goes?
2
Is it okay to trim the toilet tank overflow pipe?
0
Overflow pipe from water tank constantly dripping
2
Can a clogged toilet drain cause a tank overflow?
0
Toilet tank fill tube