Can anyone help me identify this old audio cable?

I have this old Bang & Olufsen vinyl record player, with a old connector for the speakers. Do anyone know what type of connector this is? And if there exist some converters?

Would love to get this to work again. 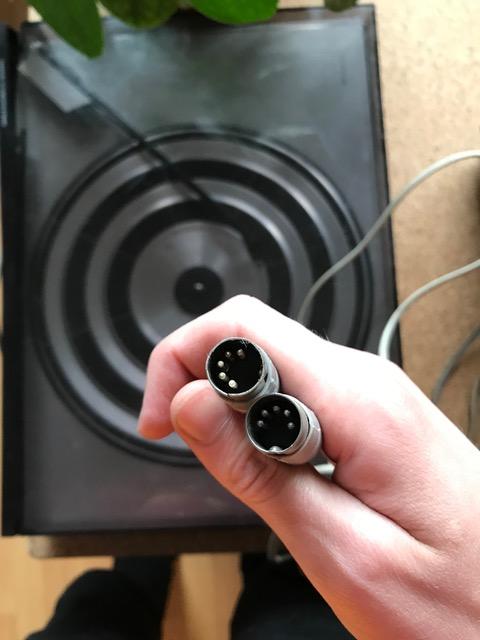 Those are 5-pin male DIN connectors. Same as used in the original IBM-PC keyboard cables.

From the photo this is obviously a patch cable of some kind for an audio application.

Here are some typical wiring schemes:

(Shields are connected to pin 2) 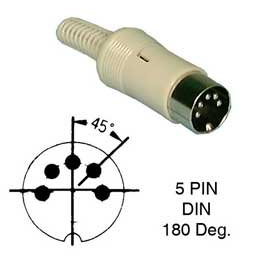 This is common on old audio equipment in Europe:

Though your equipment could be wired differently, so it's worth checking carefully with a multimeter to avoid possible damage.

It's a common enough problem, though, that if you search for "Bang & Olufsen 5-pin DIN to rca" you'll find cables you can buy that convert it to the more common RCA audio connectors you'll find on amplifiers today.

Still alive and kicking, as a MIDI connector, albeit with only 3 pins connected - the three central ones. Be aware that there are three sorts of 5 pin DIN plug/sockets - 180 degree, as you have, and 270 degree, for much the same uses, and domino, with a central pin, impossible to get them mixed up when plugging in.

This was enabled by having control signals passed between receiver and turntable over the additional pins in the connector.

Plain old 5-pin DIN cable, used to be very common up until the mid 80s before, for some reason, RCAs came along and displaced it, even though to do the same job as a 5-DIN you needed four separate RCAs (or two stereo ones each with 2 plugs at each end), all connected to the correct sockets in the right order, and the separate grounds aren't of any benefit when Ground is Ground in all the interconnected equipment.

I've got a classic turntable and receiver-amp pair that connect straight together with a single one of these, and it's a total piece of cake. Like a SCART or HDMI for four different analogue audio channels. If the mismatched tape deck that also sits with them was but a few years older it would connect to one of the two-way "tape" sockets on the amp (the turntable connecting to a specific Phono socket, which has a built in EQ stage) with another single cable but, thanks to the standardisation, be able to both play and record using that one lead. As it happens, it is an RCA device, same as the DVD player (well, various different inputs passing though a manual switchbox in truth, but it's the normal user) feeding "tape 2", so I've had to use a 2RCA to DIN-5 converter lead with my fingers crossed that it's the "right" way out for both (got lucky...).

(oddly, I do have a 4xRCA to DIN-5 cable somewhere around here that I once salvaged from an old rig at work, with a stereo in and a stereo out (or as it was for some bastardised video editing rig, video + mono audio in and video + mono audio out), but never yet got to use in anger... thankfully no need (yet))

I wouldn't immediately have thought it was for speakers, as it's not meant for carrying any significant power, but people have done a lot of corner cutting or otherwise easily enabling hacks down the years, official or otherwise, so it may well be a very strange way of connecting them, with somewhat limited power? The amp I have uses 2-pin Speaker-DIN, breaking out of the same chassis backplane as the line-level connectors... absolutely no chance of junior accidentally plugging something in backwards and making it go boom, therefore..

8
What are my options for multi-room audio?
0
What kind of timer socket is this and how can I get it working?
2
Can I send audio through coax cables?
0
How to setup an audio system for TV and other audio sources?
8
Polaris type electrical connectors terminology
0
Connecting a single audio device to multiple outputs for whole house speaker system
1
Wondering if I am missing anything with my electrical system set up using Polaris connectors