Why are fire sprinklers and extinguishing systems failing? [closed]

I just looked at some photos of property destruction from fire in Santa Rosa, CA and I was appalled and deeply saddened at the loss of life. This photo is the charred remains of the Hilton hotel in same town. While I can understand wood frame homes with no fire sprinkler system succumbing to total destruction by fire, this should not be the case for commercial buildings such as 4 or 5 star hotels that belong to worldwide chains. In my district, the fire inspector comes to commercial facilities every year to check these systems, and you cannot get a certificate of occupancy without them. 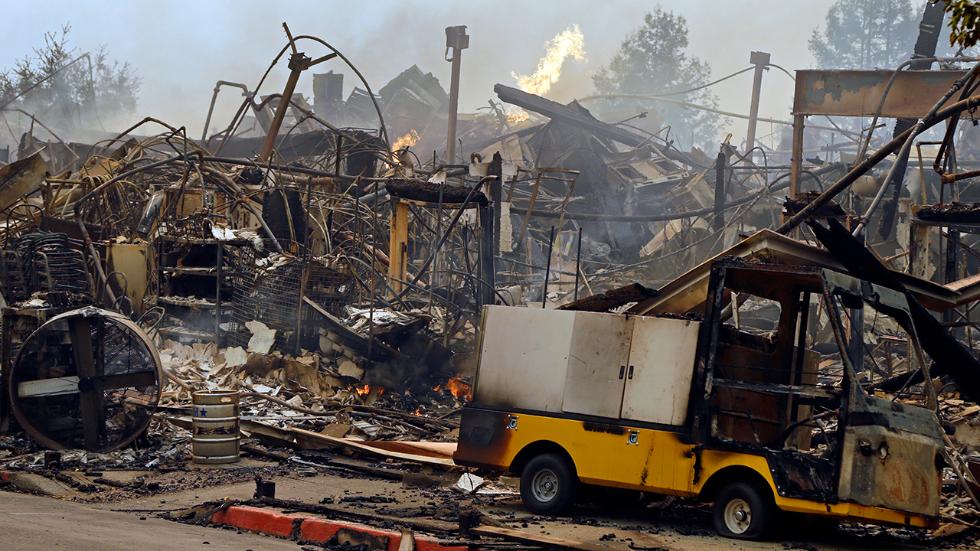 So how did this hotel burn to the ground? If I wanted to construct a fire proof building using metal frame and studs, bricks, and concrete; what kind of sprinkler system should I use to fire proof the furnishings and interior?

If you're not from the wildfire west, it's hard to get it. This isn't a dumpster fire, it's a firestorm. You might as well be putting the building in an autoclave and expecting it to not burn.

Anyway, sprinkler systems do protect buildings, but from the normal scenario of fires started inside occupancy space. The goal is to suppress it before it heavily engages the building. When fire is consuming the rafter holding the sprinkler pipe, it's much too late, and wildfire attacks sprinklers from the wrong side. 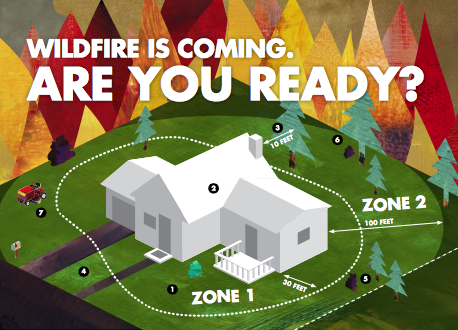 Far and away the #1 defense in the firelands is defensible space. Keeping vegetation (fuel) down to bare minimums within 100' of any buildings. When people follow the rules, they tend to do dramatically better. This is one reason you have random vineyards relatively untouched - this is the heart of California wine country, some say best wine in the world.

The problem is, homeowners and landscapers absolutely hate defensible space, and either neglect it or actively ignore it.

Google Earth tells the tale; fire up Google Earth on the area and go see how well they did with the 100' rule.

Worst of all are eucalyptus trees; these were imported from Australia because they are fast-growing and were thought to make good windbreaks. They are an extremely oily tree with very high fuel value, and they go absolutely crazy in a firestorm. For some reason, Californians just love the distinctive smell and love to landscape with them. Makes no sense.

It's true that endothermic building materials help (materials which aren't fuel). But that only takes you so far; occupant contents are often highly exothermic, which is what finished WTC. That can be managed in a hotel with good furnishing choices, since hotel guests don't bring much and will take it with them when they evac.

If I were trying to build for wildfire survival, other than defensible space, I would go for reinforced concrete construction with non-flammable insulation on the outside, with non-flammable cladding designed to keep the insulation intact. These also happen to harmonize very nicely with passive solar design, which is precisely my point: the big insulated thermal mass that resists day-night thermal changes, will also resist the fire's heat.

Another scheme, an amplification of the above, is earth-sheltered design, in which case you could let the fire roll right over the building.

There would be a place for water in defending from wildfire, but you've got a big sourcing problem because everyone will want water at the same time, and you're already in a desert. Wine country wasn't a desert, but it became one when a million people moved in. California water supply is a big-dam problem, so you would have to have a local supply of some kind, e.g. a pool.

First step: don't let the fire burn right up to your house

The concept of defensible space in a wildfire-prone area is to make sure that there isn't a huge amount of fuel right next to the building that allows the wildfire front to burn hot and fast right up onto it.

Second step: rocks don't burn, so build from those.

For walls, the ideal assembly is about what Harper said: a reinforced concrete (either conventional cast-in-place, fire-resistive ICF, or precast) structural wall with a liquid applied or fully adhered control layer attached to the outer surface of the structural wall, noncombustible rockwool continuous insulation on the outside, and a noncombustible cladding (such as fiber cement or brick veneer) stood off using hat channels mounted through the rockwool in order to back ventilate the cladding. If a sheathing material is needed within the assembly, glass-faced, fire-rated Type X gypsum board can be used.

For roofs, a similar philosophy is deployed. The roof sheathing is noncombustible, with the soffit and fascia boards made from fiber cement or similar noncombustible materials. Atop the main roof deck sheating goes the roof waterproofing layer, and atop that goes the rockwool insulation. In lowland, low-snow areas, a noncombustible overdeck and roof covering (such as tiles or standing-seam metal) can be attached directly atop the insulation; in ice-dam areas (aka where it snows a lot, such as the Sierras), you'll want to run hat-channels over the insulation again to back vent the roof overdeck and covering for ice dam control. See BSI-068 for the in-depth lowdown on all this.

Third step: keep the fire out

First, note that I mentioned nothing in the previous section about the attic being vented. Vented attics have this rather disastrous habit of ingesting flying embers during a wildfire, which turns the exterior fire problem into an interior fire problem right then and there. As a result, an unvented (cathedralized) roof is the way to go in a wildfire zone -- ice dams can be controlled by a vented over-roof as only the roof covering (upper surface) needs to be kept at or near outside temperatures for that.

Second, we tackle the topic of windows. Annealed-glass windows break from the heat of a flame, letting flames and embers in; even when they don't break, radiant heat just zips right through them and will eventually ignite any combustibles inside even though the window stays intact. As a result of this, fire-protective tempered glass is the minimum required for glazing in wildfire zones -- this stuff is rated to not break or shatter under 20 minutes of fire exposure. It will still let radiant heat through, but in most wildfire scenarios, all you need to survive is the passage of the flame front, which typically lasts 10 to 20 minutes. In addition, multiple-pane insulated glazing units outperform single-pane windows under fire conditions, as the fire's effects on the inner pane are attenuated until the point the outer pane fails.

If you are dealing with a high-value interior load (such as the inside of a five-star hotel) or a higher-challenge environment (such as minimal setbacks in a town within a wildfire zone), it is possible (albeit costly) to do better than this, though. Modern fire-resistive glazing materials such as Pilkington Pyrostop and SaftiFIRST SuperSafe XLM-II consist of a laminate of glass and intumescent layers that are designed to not only maintain the integrity of the pane during a fire, but block radiant heat as well -- in fact, these materials pass the same tests that fire-rated walls do! As a result, when installed in a temperature rise rated frame, they can provide maximum protection from fire trying to get in -- neither embers nor radiant heat can pass through, for 45minutes or more under standard test conditions.

Last but not least, miscellaneous glazing (door/sidelite/transom) and openings (such as for vent ducts) need to be protected as well. Other glazing materials need to be held to the same standard as the window glazing, and exterior doors should be of solid wood or metal construction at a minimum, with a temperature rise door and frame used if the window frames are temperature rise rated. Other vent openings need to be protected by a fine-mesh screen (for make-up air ducts, combustion vents, or kitchen/bath vents) or a metal damper (for dryer vents) to prevent ember ingestion.

Not the answer you're looking for? Browse other questions tagged fireproof fire-sprinkler fire-extinguisher or ask your own question.