Out of no where, starting today, my Siemens AFCI breaker tripped. It trips immediately every time I attempt to reset it. Nothing has changed in my house. I turned off all light switches and unplugged everything on the circuit yet it still trips. The breaker is probably about 8 years old (when the house was completely rewired by the previous homeowner). Are these breakers known to fail or become overly sensitive as they age? What's the life expectancy of these breakers? Any thoughts or recommendations? Thanks in advance. 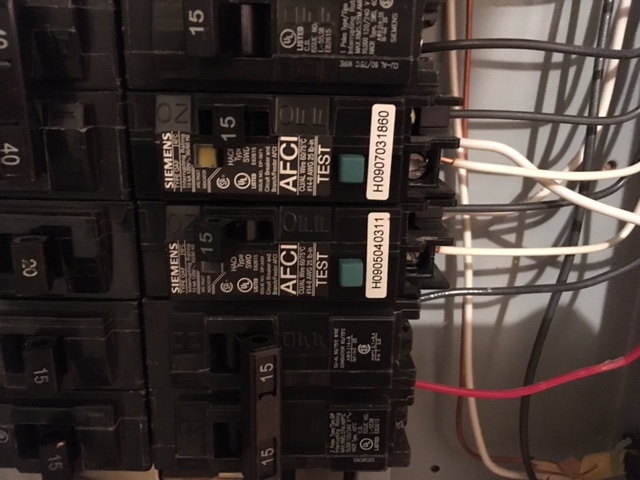 I'm at a lost...I bought a new AFCI breaker (expensive) but before swapping it out, I confirmed that the issue still exists. Also, before swapping it out, I swapped the two circuits since the bedrooms are split between two 15amp AFCI breakers (1 that keeps tripping and the other remains closed; no issue). When I powered back up the house, the breaker stays closed (unlike the other breaker). When I went back up stair to turn a light on to test, the breaker would trip immediately (this happened two more times/resets). This is where it gets weird, after the third time, the breaker stopped tripping. Any thoughts?

There is an easy way to find out if your AFCI is bad. Disconnect the circuit but not the neutral from the breaker and see if it resets. If it does reset your AFCI is working and somewhere in your circuit you are getting an arc. Exactly where can take some work.

Employ the normal troubleshooting method of disconnecting half of the devices and see if the AFCI trips. The you take half of the half and try it again. Whether the AFCI trips or not tells you which direction to trace. No trip you add to the circuit. Yes trip you work toward the breaker. Eventually you will find the problem device. If that's a little hard to digest then just start at one end of the circuit and begin disconnecting fixtures one at a time until you find the problem.

Put the circuits back where they were. You may be and try again. Always do one thing at a time when trouble shooting. AFCI can be finicky and can have issues if you cross phase. Bathrooms were split for a reason a/b phase.

Not the answer you're looking for? Browse other questions tagged electrical circuit-breaker electrical-panel afci or ask your own question.

0
AFCI keeps tripping after power outage
2
Can a laptop cause an AFCI to trip?
1
How to troubleshoot wiring that trips AFCI breakers?
3
Upgrading 2 breakers to AFCI, always trips
1
20amp afci breaker with gfci outlet tripping under 15amp load, but not lower loads
1
AFCI Breaker tripping
2
2 AFCI Breakers Tripping - One instantly and the other after a few minutes
1
AFCI breaker trips on the second start of table/miter saw