I live in Italy. I would like to know whether American Wire Gauge (AWG) is used in Europe for electrical wires that run within homes, or whether Europe usea different standards. Does each country in Europe use its own standards for home electrical wiring or is AWG somewhat of an international thing?

Historically, the British use[d] their own SWG but this changed roughly when they joined the EU; Brexit will apparently not change anything in this regard... for the subtle reason that the EU-wide standardization body in this area (namely CENELEC) technically is not an EU institution... so the UK is still a member of it after Brexit.

The colors of wires used in European power cables (e.g. brown, blue, red/green) come from CENELEC HD-21 and HD-22 documents, recently merged as EN 50525. The same standard specifies the types of common power cables that you see in stores, e.g. H05VV-F etc. (Note that the latter CENELEC standard begins with a 5, not a 6, which means it is a regional European standard, not an incorporation of a IEC standard, like the metric gauge one.)

Finally, "home electrical wiring" involves much more than wire gauge or the color of wires. Generally, there are two sets of standards those of (US) NEC and those of IEC. Legrand has a map of roughly where they apply (reproduced below). Going into more detail is far too elaborate for this Q&A format; for further information, refer to the document I extracted this map from. 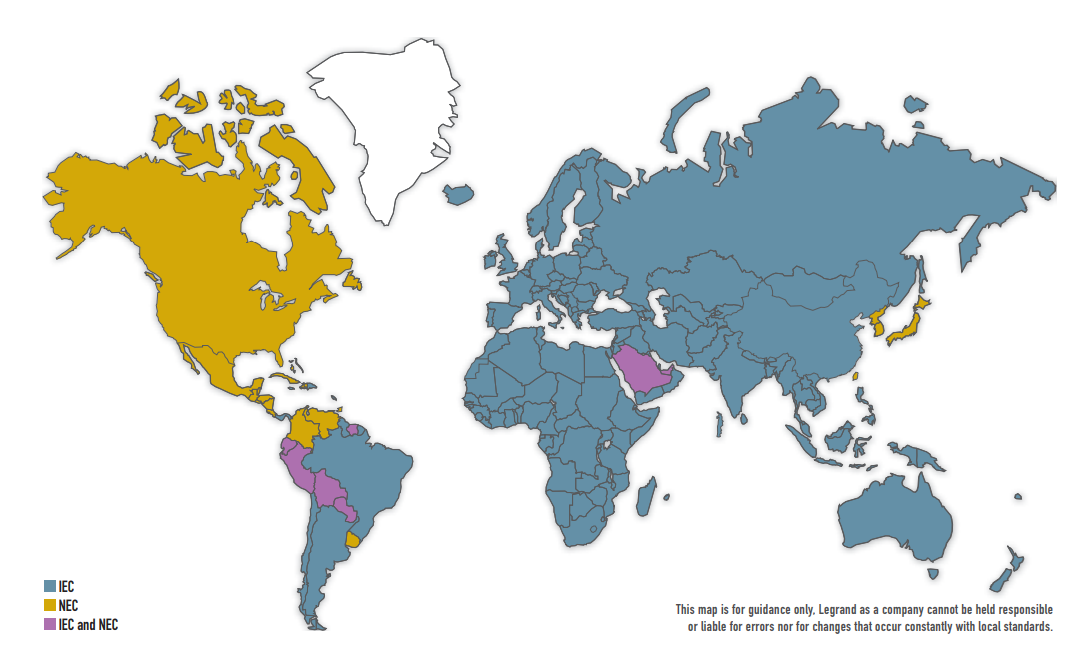 As far as I know, Europe (or pretty much the whole world other than USA/perhaps Canada) uses the wire cross sectional area in square millimeters as the standard for wire sizing.

AWG is used in North America, the Philippines, Guam, Puerto Rico, some of the Carribean, etc. The color code is white or gray for neutral (hots everything else but green), and the voltage is typically 240/120 split phase.

Everywhere else it's metric wires dictated by square millimeters of cross section, i.e. 1.0 ( which is very small by North American standards), 1.5, 2.5, 4, and increasing 50-60% per size from there. Color codes are generally harmonizing toward light blue for neutral, brown for the first hot, and voltage is 220-240V single phase derived from 3-phase wye.

2
What is the minimum distance that should be maintained between parallel electric and data cables?
10
How to read the numbers on electrical wiring to run within walls
2
Are voltage adapters suited for long-term use?
0
Moving House Electrical Outlet
1
Wiring question for replacement of two switches in one box
2
Correct gauge and jacket type for feeder wire to subpanel?
0
What are the steps to map (and remove) unused electrical housing wire?
0
Adding new overhead outlets in garage - conduit required?
0
What specific type of wire goes to my duplex and NEMA GFCI outlets?
2
Should an older Knob and Tube rubber-coated 14-gauge conductor be protected with a 15-amp breaker, or a 12-amp fuse?