Horrendous electric bill in new apartment - what are we doing wrong?

We moved from an apartment (approx 1000 sq ft) in NH to one in MA (approx 1200 sq ft) to be closer to work (Boston). Our old apartment electric bill used to hover between $70 and $110 monthly. Our provider is the same in NH and MA (Eversource). The new place is new-ish, the building having been constructed in 2006.

Today I received the electric bill for the new place and to my horror, it came up to $278.93. Here's the bill: 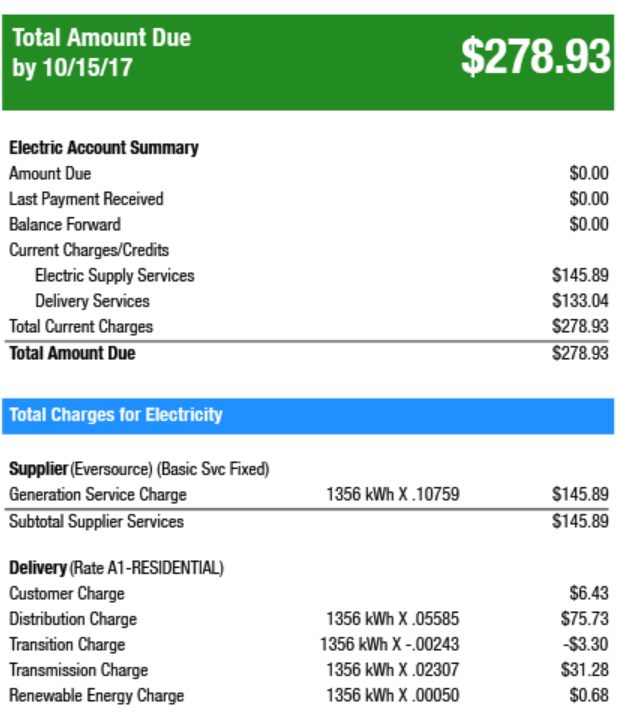 Important factors that I can think of:

In answer to your first question: Yes. If there is no one occupying an area you should set you T'stat lower while you are out.

In answer to your second question: I have no idea anymore as to what is a fair rate, but I will say your bill makes no sense. We all get the $145.79, but according to the breakdown of your Delivery Services, it only adds up to $110.82 not $133.04. So where does the extra $22.22 come from? Look over your bill and see if it mentions that charge and if it doesn't, I would spend some time on the phone having someone explain it to me.

On you third question: The first thing I would do is go online, make phone calls, and find any social sites that are discussing this problem. When I say go online and make phone calls, I am talking about directing them to the service provider. I would not try and be rude or mad, but be firm and ask detailed questions about your billing. Also expect and be firm about getting detailed answers.

On matters of saving energy, first as you originally proposed. Set your T'stat to prevent you AC/Heat from coming on as often if you are not in the residence. I use a programmable T'stat and have mine set for 58F in the winter and 80F in the summer. Also I would suggest you don't need it so high if you are sleeping in a bed under covers. I would suggest an electric pad or blanket to keep you warmer in the winter and set the AC for say 60F and come back up to 72 an hour or so before you get up.

Also orientation is everything as brought up by @1006a. Windows and their exposures are key, you might look and make sure you have heavy insulated curtains to keep conditioned air in especially on extra cold and hot days.

I expect it is because of "green" energy. Those charges are hidden in "distribution", etc. charges . You can tell by comparing the kilowatts used at your old residence. If total kilowatts used are roughly similar you are paying a green tax. ( It costs no more to move electricity in NH that MA .)

The biggest users of electric power are the HVAC system, the water heater and believe it or not, your cable box. Yes, those boxes can use up to 600 watts weather or not they are on or off! The cable box alone, if you do not unplug it or have it on a power strip can end up costing you $50 to $60 a month! If I were you, I'd check out all your own electric-powered devices with this gizmo called "Kill a Watt." Its really cool and tells you exactly how much power each device uses and how much per month it will cost you. In addition, I have an electric water heater, and I keep it turned to the lowest setting (it also prevents accidental burns as I use the hot water on full hot all the time). And for your HVAC system, for 100 bucks, you can get a programable wi-fi thermostat. Set it up to match your schedule, and the cool thing is that you got the app on your phone, so you can adjust the temperature anytime you want from anywhere on the planet. When I am at work, my heat is set at 63 degrees; when I am home it is automatically set for 68 degrees. When I travel, my heat is set for 45 degrees, and the cool thing about the app is that I can turn up the heat a few hours before I come home and my house is all warmed up.

33
How best can I discover what is up with my electrical bill?
9
Why did my electric bill climb suddenly?
3
Why won't my AC system turn off after I flipped the breaker?
4
$400 electric bill traced to heater - what could be wrong with it?
9
How much energy will continuously running a furnace fan use?
3
All outlets on one 15-amp circuit, need AC unit
1
Theories for cause of tripped breaker when power use was low due to vacation
0
Are individual electric heaters more efficient to operate than an electric boiler?