I'm trying to replace an old thermostat with a WiFi one that requires a C wire to power it. When I opened the panel on the air handler 1 (where I'd like to connect the thermostat to), there's no wire at the C terminal (from the cable running to TS), however it looks like there's an extra wire in the cable running to the thermostat which I hope I should be able to use for the C connection. I'm seeing something strange (at least seem strange to me) with the way the whole system is wired. We have two zone cooling and heating. Two air handlers in the house and two AC units outside. The boiler has two zone valves controlling the heat. Everything works as it should - ie everything works independently when turned on separately and together when turned on together. The equipment is relatively new (the house is 12 years old). I believe I accounted for all the cables. Based on the diagram, I'm not sure I understand the connections between TS2 and AH2, specifically why there are no connections between Y and W terminals. Comparing to TS1<->AH1 a call for cool and heat would activate the air handler, which in turn would active the outside unit or the boiler, but there are no such connections from TS2->AH2. 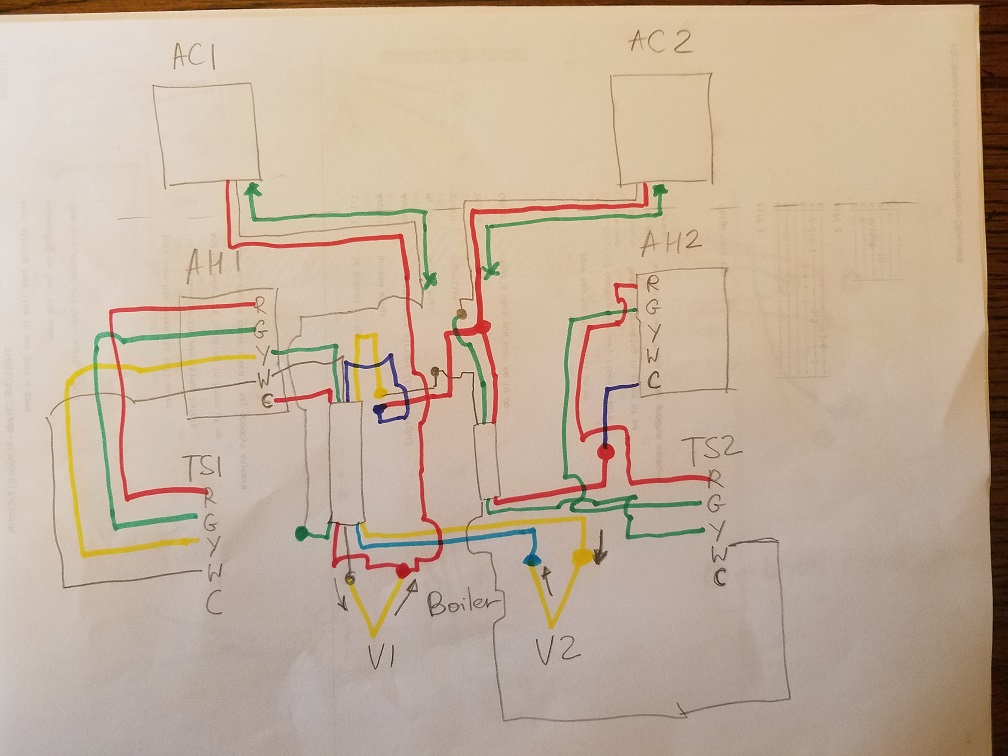 Does this make sense or am I missing another cable somewhere. Note that on the AH2 terminal there are wires connected to the Y and W terminals, however as far as I see, they're part of the cable going to TS2 and they're simply not connected there.

The explanation for what's going on here goes back into the mists of history, back to when forced-air, fuel-fired furnaces and fan-coil air handlers were first developed.

Back in the bad old days

Early gas furnaces had only two thermostat wires, R and W. A call for heat from the thermostat closed the gas valve and fed gas to the burner, which the pilot then ignited, producing heat. (Oil burners are roughly similar save for having more combustion control complexity.) This was fine in gravity duct systems, but when forced air came to pass, something had to turn the fan on and off at the right time. You can't have the fan turn on with the burner or else you'll get a bunch of cold air out until the heat exchanger in the furnace warms up; likewise, turning the fan off immediately when the call for heat goes away isn't always wise either. So, a fan thermostat (often combined with the high-limit in more modern furnaces) mounted in the furnace plenum is used to switch the fan on and off autonomously.

This means that when a G wire is added to such a system, it is a request for the blower to come on. The blower can come on without a call for it from the thermostat, and in modern furnaces, it is possible for the furnace control to override the thermostat's blower call (say if a call for heat comes during a call for fan, to allow the heat exchanger to come up to temp as it should). Adding A/C means that the furnace needs to know to turn the fan on during a cooling call, so the Y wire is also routed to the furnace control in these systems so that the fan can be run at the correct speed during a call for cooling.

However, some people didn't want to mess with gas in their house, and other folks wanted to get rid of messy oil tanks or expensive propane, and its attendant delivery hassles. For them, the first alternative that developed was what is called an "electric furnace" -- this is a fan-based air handler with resistance heating elements in the airstream. While not as economical as piped fuels, electric heat was seen as safer as it couldn't leak and/or explode, and also is cheaper than trucked-in propane or heating oil.

When the early electric central heating furnaces were designed, though, the designers had a decision to make: who should control the fan? Unlike fuel-fired systems, with electric heat the full heating power is available instantly and the peak temperatures are happening inside the duct. This means that the fan needs to come on basically instantly to keep temperatures within the air handler acceptable. As a result, either the air handler or the thermostat could get delegated the job, and to save some money on a fan relay in the air handler, the job got left to the thermostat.

Hydronic fan coils like yours and direct-expansion heat pump air handlers are the same way -- hydronic heat is available whenever the boiler and circulator are going, and likewise with a heat pump where heat's on whenever the reversing valve is set for heat, the compressor is going, and the outdoor ambient isn't too cold. In this scheme, the G wire is a demand for fan from the thermostat -- if the thermostat calls for heat but not blower, then the air handler will shut down on high-limit after a little while to protect itself from damage. Likewise, the Y wire is not needed by the air handler since the thermostat will call for blower along with a call for cooling.

Your fan coils are designed along the paradigm of an electric furnace; namely, that the thermostat is in charge of the G wire. In fact, neither Y nor W are even connected to any circuitry within your air handlers -- the terminals are provided there to serve as convenient wire-landing-points, that's all.

So, both your thermostats are set up correctly, and the 0180 setting should not be changed or else you'll get quite poor performance out of your system unless you select the fan ON all the time (albeit not a high-limit trip since hydronic fan coil units can't meltdown due to lack of airflow, unlike their electric or fuel-fired counterparts which need high-limit protection for safety's sake).

I'm not totally sure what you're asking, but the wiring seems okay to me. When thermostats call for cool, they typically also energize the G terminal (call for blower). So when thermostat_2 calls for cool, it signals the condensing unit directly via Y, while signalling the air handler via G. The Y terminal in most air handlers/furnaces is a simple pass-through terminal, which doesn't connect to the the air handler/furnace circuit at all.

Aside from that, the wiring looks fine. While the zones share cables, the circuits are completely separate.

Not the answer you're looking for? Browse other questions tagged electrical wiring hvac thermostat or ask your own question.

1
Why did I have to change the wiring to use a smart WiFi thermostat?
1
Can I connect two wires to a single screw terminal in my HVAC system?
3
New Thermostat Ecobee3 to Old Galaxy GG-75 boiler - Needs common wire
0
How can I install a Honeywell Wifi RTH6580WF1001 thermostat in place of a Honeywell RTH2300b?
1
Test voltage for common on HVAC wiring
1
Thermostat C Wire (Possibly Unconnected)
2
Connecting thermostat common wire to air handler or boiler?
2
Old Rheem rhqa 1000 to thermostat wiring help