What type of professional can repair a possible gas pipe obstruction causing a large drop in pressure to my furnace?

Two feet from the exterior wall the black pipe has a t connection with a run to a gas dryer. The gas dryer works fine but the 3 year old gas furnace has a supply problem.

The furnace initially ignites okay with a gas pressure reading of 7 but when the burners go to the second stage the gas pressure drops to a .5.

Thanks for your help

Why would it act this way?

The size of the tube controls the flow rate, which limits how quickly the pressure can equalize. But it will eventually equalize.

If your gas pipe is 99.99999 % clogged, eventually the pressure on either side of the clog will equalize. But if you then open a bigger hole to pull the gas out -- like burning it -- the rate of exhaust will be greater than the rate of equalization through the tiny hole in the clog, so the pressure on that side will drop lower and lower. Until your stop burning the gas, at which point the pressure will slowly go back up and equalize.

Can you DIY? Yes.

Since you're posting on DIY.stackexchange.com, I'll point out that this may well be something you can do yourself.

You have a gas furnace. Somewhere near the furnace you have a gas connection that can be disconnected. This is probably a union fitting, like this: 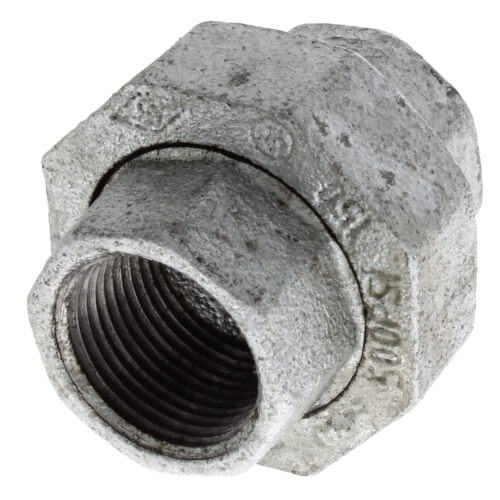 There are other possibilities, but this is by far the most common. Union fittings are important because pipe is threaded together, and you cannot loosen one arbitrary location without also overtightening the threads at the other end of the pipe. Thus, a union is a fitting that allows you to create a disconnection in the middle of the pipe.

If you shut off the gas (at the meter, or at some shutoff valve that may exist upstream of the possibly blockage) and then drain the gas lines (by turning on the stove and burning off whatever is left in the pipes, for example), you can then open the union, and work your way backwards disconnecting pipe until you reach the known good spot.

You don't have to disconnect every single fitting. Most of the time you can skip a couple of fittings, if you pick your battles right and make sure there's enough room to twist a group of fittings around.

Once you're done, you can shine a light through the pipes looking for obstructions. Use whatever you have to hand - a skinnier piece of pipe, a swiffer handle, or even just a heavy weight on a string, to dislodge any obstruction you find.

It may be that the obstruction is caused by decay in the pipe -- perhaps there is one pipe where water has built up and rusted. You'd want to replace this piece. Just measure it and go to your local big box or plumbing supply store - they can cut to length and thread the pipe for you.

To reassemble, you'll want a wire brush to clean the pipe, and some gas-rated "pipe dope" which you can also get at the same store. These connections will also require at least one, but probably two pipe wrenches of substantial size - 10 to 16". And you'll probably have to put some serious weight on them at one point or another. So have a helper or some helpful tools, maybe including nail-up straps, wood blocks, a ladder, etc.

Other pipes than black iron?

There are other gas delivery technologies. One such is CSST, corrugated stainless-steel tubing. This is to natural gas what PEX is to plumbing -- much easier to route, faster to install, and it requires a whole different set of procedures and training. You don't want to just insert this in the middle of a run of black pipe, though. It's the kind of thing you get either installed as part of new-build construction, or when you redo your entire system.

Other commenters and answers have mentioned this, but it bears repeating: if you have a blockage in your pipe, you may have the blocking crud also in your appliance. Before the gas enters your appliance -- right before -- there should be a sediment trap. This will appear as a 90-degree bend in the flow of gas, with an open leg pointing down: 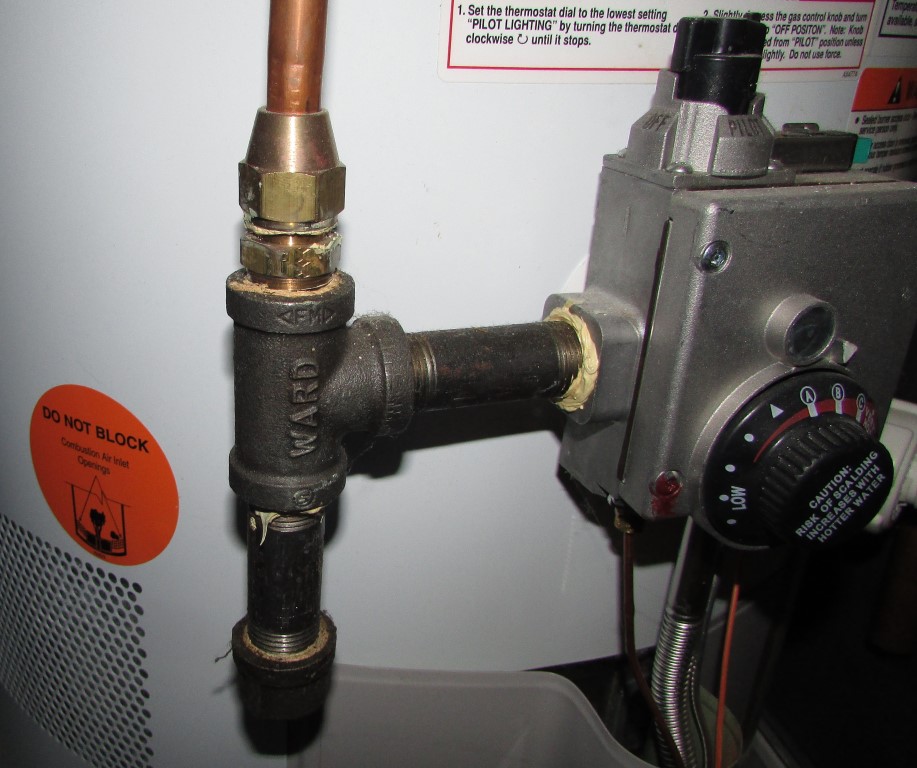 The purpose of that "dead" leg is to collect whatever crud might be in the pipes before it can clog up your appliance. So... shut off the gas, empty the pipes, and then open that trap and see if anything is in there. You may have to dig it out with a pencil or a pipe cleaner or something. If there's a huge amount (like: the entire leg is full) then crud might also be inside your appliance -- maybe a "service call" is appropriate?

To address the gas pipe blockage or a possible leakage the professional you should contact is your gas company. They should have service personnel just for this sort of work.

Neither one. Contact your gas company for a certified gas repair technician.

This might vary by location - In USA - state, city, county, federal codes govern this. Search for Gas certified pip and you will see a range of pipe available (not necessarily in compliance with building codes - but what is available to be used).

6
What can I do about a gas pipe that is in my way?
2
What could be causing my gas furnace to make a loud noise?
3
What type of copper pipe do I need for a typical LP gas range?
1
Gas Fireplace Won't Stay Lit With Fake Logs In Place
0
Can I increase gas pressure to a stove?
2
Why am I not getting enough gas pressure for a BBQ and generator?
1
Could a gas pipe obstruction could be causing a reduction in gas pressure to my furnace?
1
Two Stage Propane Regulator with Splitter
3
Does my home's gas pressure need to be checked?
1
Can I slow the formation of cracks in a furnace by running lower temperatures?