How to tell what brand a door lock is?

For rekeying locks, how can one tell what brand the locks are?

As far as I can tell there are no indications on the outside of the locks and I haven't taken them apart yet to check inside. Any tricks to this? The locks I'm interested in look pretty generic and are likely fairly old (though still working well) so it may be a lost cause and I'd need to pull them out and replace them or bring to a locksmith.

Here's one lock I'm interested in. Exterior, side, and interior view: 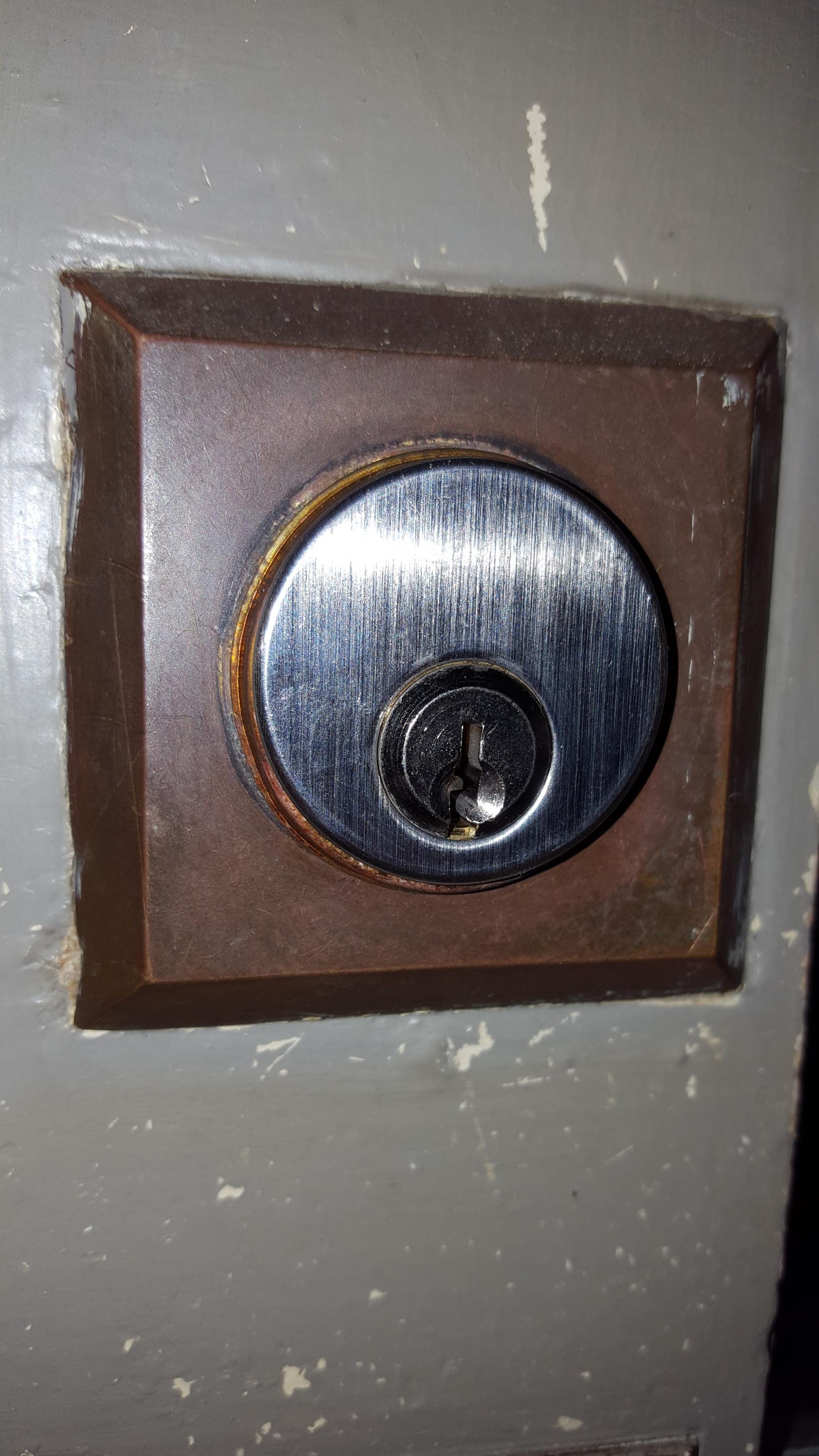 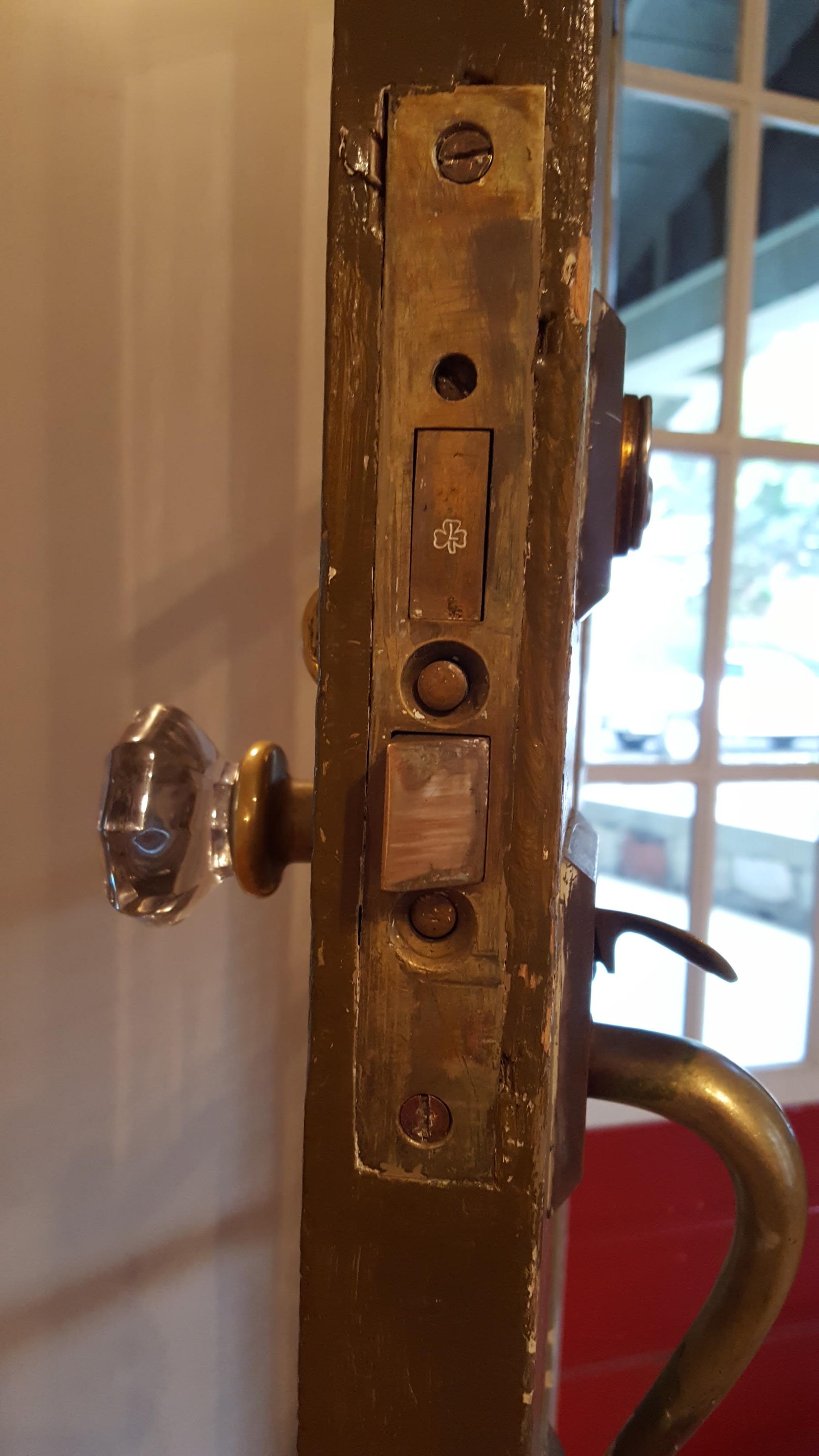 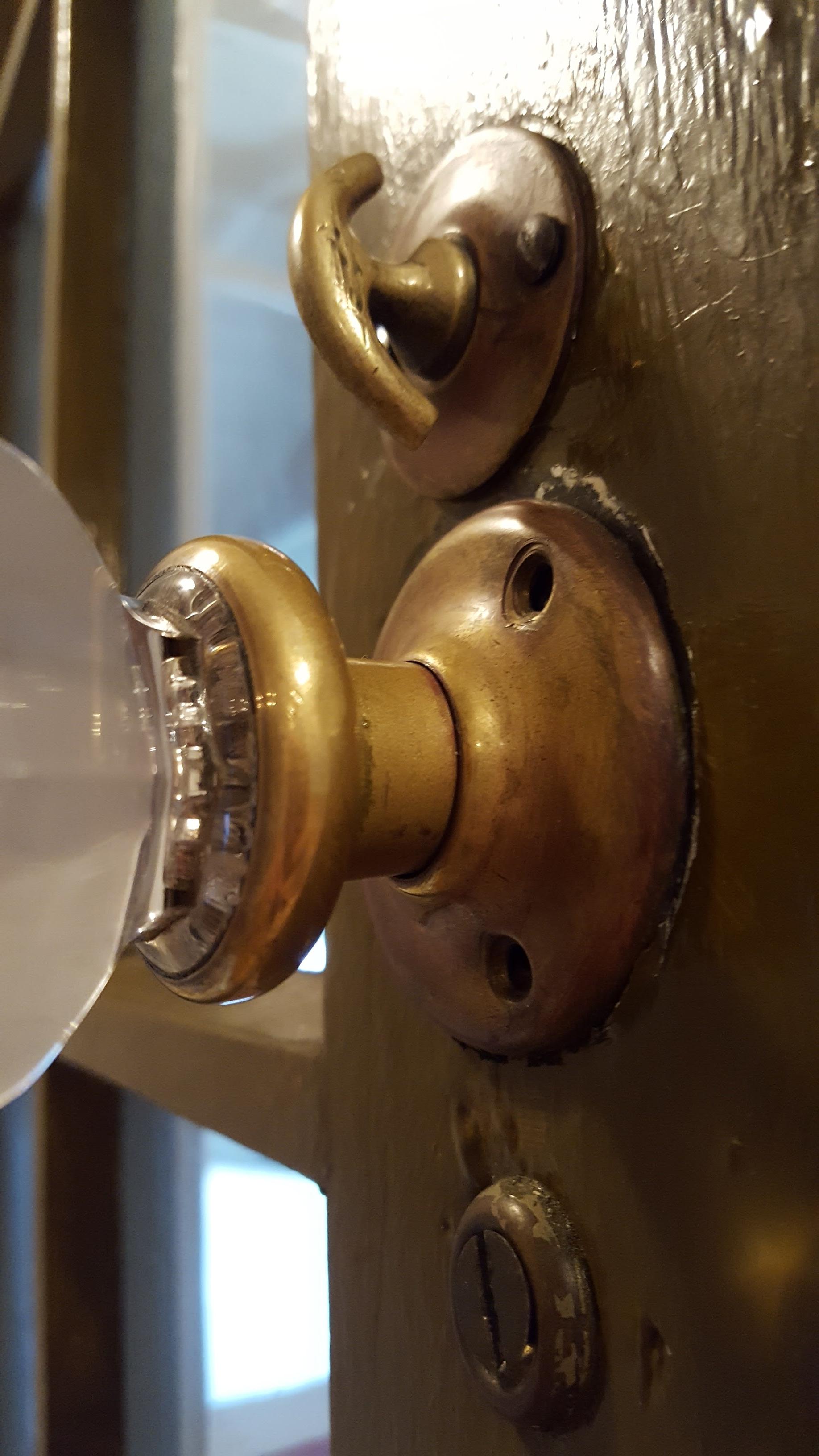 And another, also exterior-side-interior views: 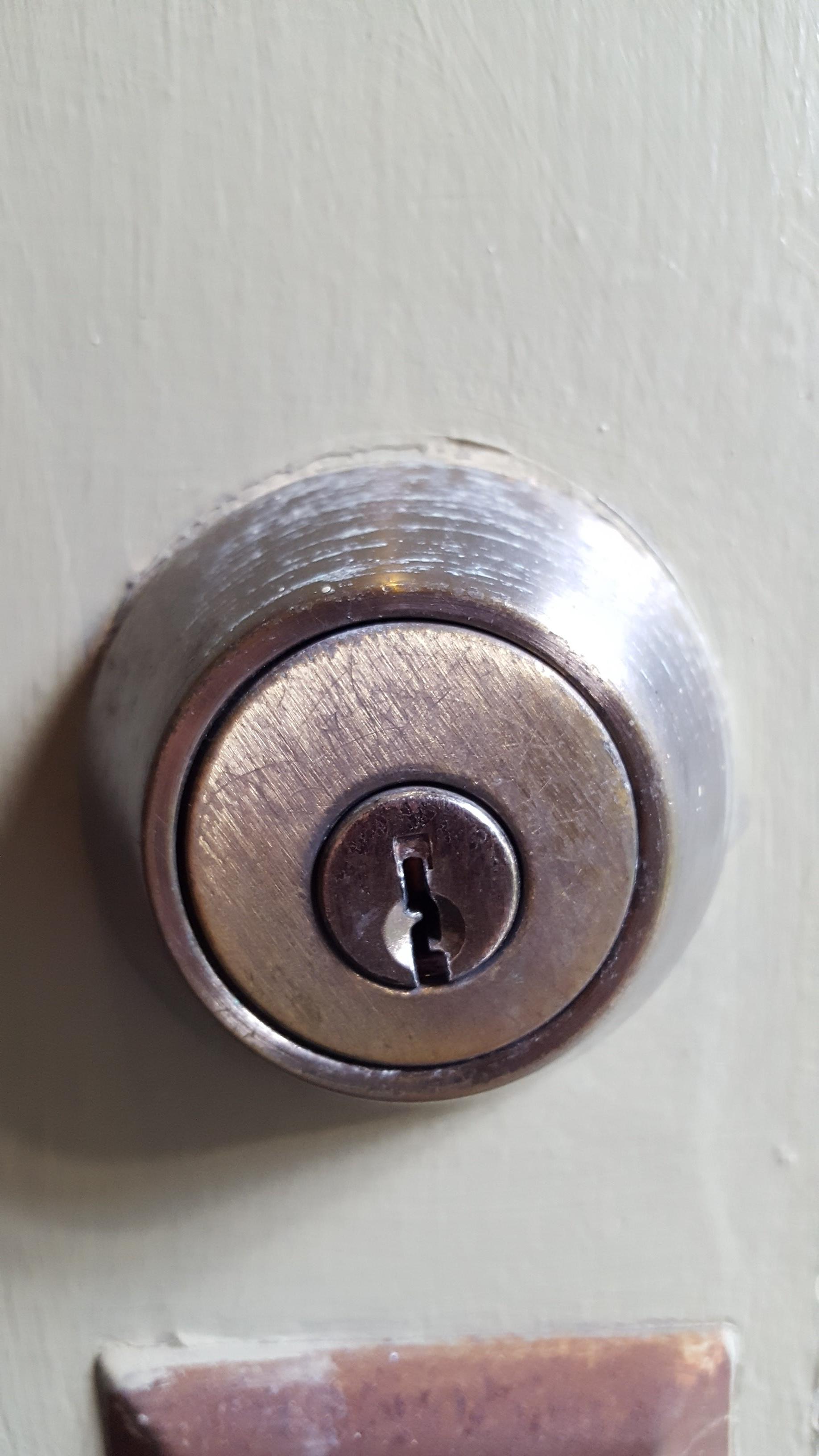 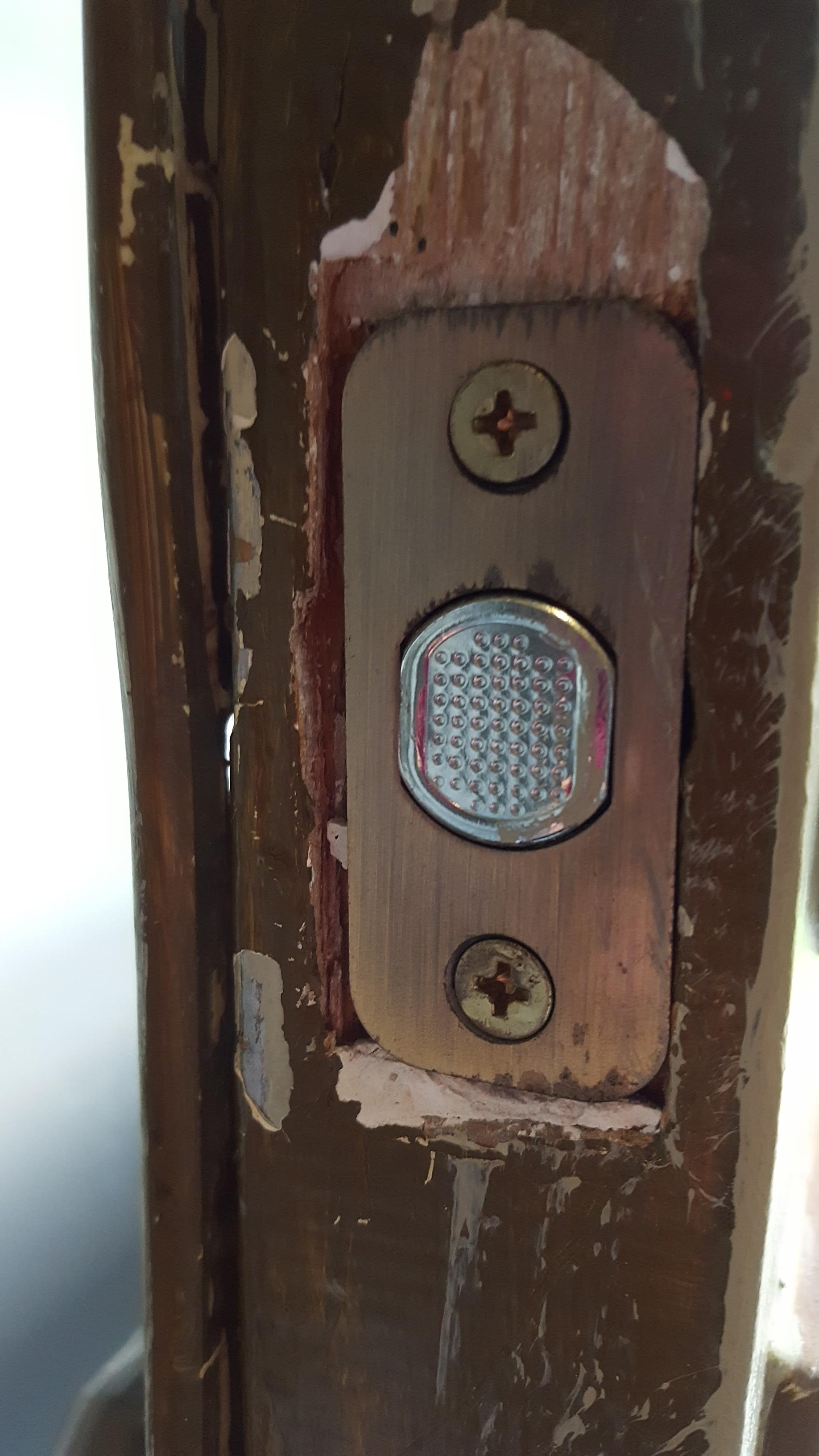 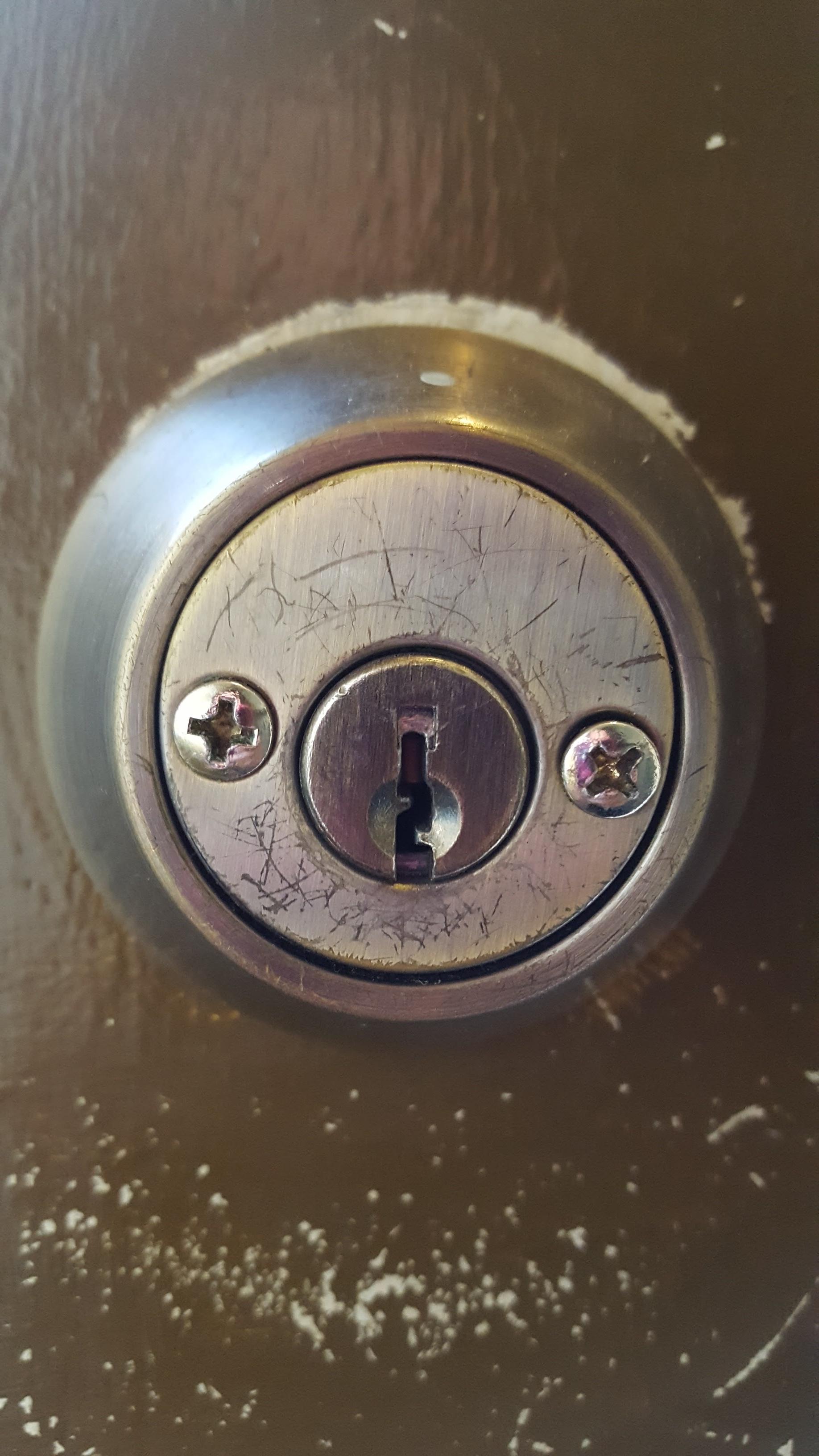 Take that last photo to a locksmith to be sure, but my money's on a Kwikset-compatible keyway

The last photo you provide (head-on shot of the outside, with the keyway clearly visible) tells me that whoever actually made the lock is probably irrelevant -- the keyway strongly resembles one of the de facto standard Kwikset keyways that are used on low-end door locks across the USA. (It can't be a Schlage due to the "squared" shape of the upper warding piece, and it can't be a Yale either because of the lack of a "tail" at the top of the keyway. The warding is also not nearly paracentric (across the middle of the keyway) enough to be found on a higher-end lock -- even Schlages are a fair bit this way, never mind an Abus or some other European make.)

Of course, IANAL (I am not a locksmith), so if you want to be sure, take that last photo and your keys to your friendly local locksmith and they'll be able to tell you far more confidently than I can what you've got. They almost certainly will be able to rekey a Kwikset-compatible lock as well, as they're compatible with most "generic" lock pins out there.

I'll start with I've got 34 years experience as a full time locksmith (1986 to present).

The first lock is what is known as a mortise lock. Back in the 1960s and before, there were numerous manufacturers of that type of lock, almost all are now defunct companies, or no longer make mortise locks. Those with original key cylinders usually have the company name on the cylinder face... this one is a replacement cylinder (more on that below).

Mortise locks are still made, but can be very expensive, and sometimes difficult to match a replacement to. They can be latchbolt only, deadbolt only, or like this one, latchbolt and deadbolt in one unit. Not all specifications (placement of holes in the door, dimensions of lock body, etc) were uniform. Some were unique. I cannot determine who made that lockbody, even though there appears to be a shamrock logo in the end of the deadbolt. I'm not familiar with that company... as I said there were many, some only sold regionally.

Now for the good news. Almost all mortise locks use a key cylinder appropriately named a "mortise cylinder". And those are readily available today, in numerous key ways, and they come in different lengths. Mortise cylinders are threaded, a very fine RH thread, and screw directly into the lock body. This is a universal size, I've never encountered a mortise lock with a different thread pitch or diameter. They must be in the proper position to work properly, normally that is bottom of keyhole at 6 o'clock (if for some strange reason the lock got mounted upside down, it would be at 12 o'clock). Once threaded in deep enough for cam to turn and mesh with mechanism, but not TOO deep, they are held in position by a set screw that's accessible on the edge of the door's side of the lock body. It will be directly inline with the center of the cylinder. Most set screw heads are hidden under a trim face plate. They also use what's called a cam on the back of the cylinder. These are held on with 2 screws. Cams operate the inside mechanisms of the lock body and turn with the rotation of the key. Cam shapes can be unique and different for different manufacturers, and mortise cylinder length depends on door thickness. When replacing a cylinder, if the cam is unique, it can be removed from the old cylinder, installed on the new one. NEVER remove the cam screws with the proper key inserted into the cylinder, unless you intend to disassemble the cylinder for rekeying. It will come apart easily with no cam on the back and the tumblers "unlocked" by the proper key.

A standard entry door is 1-3/4" thick, and would most likely use a mortise cylinder length of 1-1/8", depending on trim plate thickness. They come in 1", 1-1/8", 1-1/4", 1-1/2". The mortise cylinder in this photo is not the original, it is a fairly recent replacement, and it appears to be a Weiser key way, but possibly a Kwikset... I'll explain why it could be either. Weiser & Kwikset have a keyway identical in shape, but as Weiser keys were thicker than Kwikset, the keyhole will be a bit wider on a Weiser. A Kwikset key most assuredly will fit. If it's wide enough to accept a Weiser key, then it's a Weiser keyway, if not, it's a Kwikset. Weiser keys will not fit a Kwikset, as they are just a tiny bit too thick.

Second lock in picture is a Kwikset copycat, a low cost, low quality, Chinese made knockoff of one, typically sold in home improvement stores. Genuine Kwikset deadbolts have the name Kwikset embossed in bolt's face plate on the edge of the door (older ones say Kwikset right on the faceplate of the lock). Knockoffs are blank faced like this one. These can be rekeyed using Kwikset keys and factory tumblers, as key cylinder dimensions are usually identical.

Rather than rekey these knockoff deadbolts, I'd recommended replacing with genuine Kwiksets. The collar around the key cylider is not "armored", it's just thin sheet metal. Kwiksets have a much better collar, and the cost between rekeying and replacing isn't that much more anyway. This is a double cylinder, key cylinder on both sides, and you would be charged for TWO locks when it's being rekeyed, because there are two sets of tumblers to be replaced instead of just one.

1
entry door lock replacement
2
Removing old Entry Door dead bolt lock
2
How can I lock a sliding door that doesn't have a door lock?
1
Replacing a Novoferm garage door lock
0
Door lock broken
1
Temporary lock for a door
10
What is this kind of door lock called in English?
3
Door lock stuck, will NOT retract
1
Lid lock for outdoor chest