Home Inspector reported two 20 amp breakers are not allowed in electrical panel per manufacturer (Eaton MB1212L200BTSA). He said there must be single bar over both breaker to connect together? Is there a clip that I can attach to make both breakers trip at same time? Here is pic from inspection report. 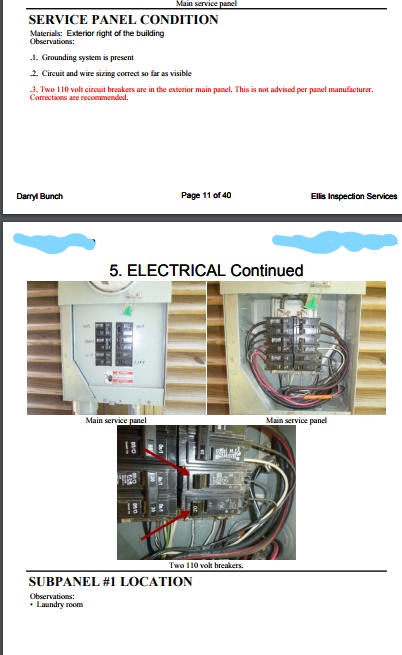 See the red arrows, he said these two 20 amps must be tandem and a clip connecting both switches?

One 20 amp powers a GFI receptacle the other 20 amp powers a platform lift. I need to keep power separate for 110 volt. I do not want 220 volt. Do I need a double-pole 20 amp that has handle ties?

The electrical panel was installed in 2012. Is it correct to install a BR220 and use it for two 110 volt circuits? Going out to purchase BR220 breaker, anything special to know about attaching wires from the two single points to double poles?

One throw too far

Your meter-main was designed to use a set of smaller sub-main disconnects instead of a single main disconnecting means, in accordance with NEC 230.71:

(B) Single-Pole Units. Two or three single-pole switches or breakers, capable of individual operation, shall be permitted on multiwire circuits, one pole for each ungrounded conductor, as one multipole disconnect, provided they are equipped with identified handle ties or a master handle to disconnect all conductors of the service with no more than six operations of the hand.

However, the pair of single pole breakers in the lower-right that the inspector complained about means that you need 7 breaker throws to turn all the power off, which is one too many.

Furthermore, the culprit breakers are a violation by themselves as they are GE THQLs, which are not listed to go in an Eaton BR panel. At this point, you might as well get a BR220 from the nearest supplier and have it slapped in in place of the culprits, killing two violations with one fix.

There is nothing in the NEC that prohibits a two pole breaker from feeding two independent branch circuits from the opposite legs it provides.

Really, it's time for that Rule of Six panel to go.

Fit a nice big subpanel inside at a suitable location. Identify a 240V load you can live without for awhile, e.g. air conditioning in the fall. Relocate that to the new subpanel to free up 2 breaker spaces. Fit a new breaker there, same amperage as your service (e.g. 60 or 100A). Wire that new breaker to supply the subpanel, leaving enough slack to move it to the upper left. Of course this work can be interrupted, and everything will still work...

Light up the subpanel and you're back in business.

As convenient, move one load at a time to the new subpanel.

You finish with one (1) 2-pole breaker in your now- "Rule of One" panel. It feeds the "new main" subpanel... and 10 blank spaces, which you cover with listed covers. This puts you in the modern league with a single main breaker shut-off, and none of the taint which made rule-of-six panels illegal.

This also makes it easy to be safe doing DIY electrical, since you can fully de-energize your "main" sub panel. Most people with main panels can't do that.

1
Wiring Options for 14/3 NM-B Cable and Two Single Pole 15 Amp Circuit Breakers
1
How can I reconfigure my breakers to make room for a sub-panel feeder?
0
Can I install Whole Home Surge Protector into two single pole breakers?
1
Twin breaker allowance
5
Installing a new electric cooktop details
3
Can I replace a quad breaker with a tandem breaker?
5
AFCI trips when adjacent breaker is switched on
3
Would like to add a 14-30 outlet in my garage
4
Can I swap a quad breaker for two double pole breakers?