How do you replace a section of cast iron drain pipe? 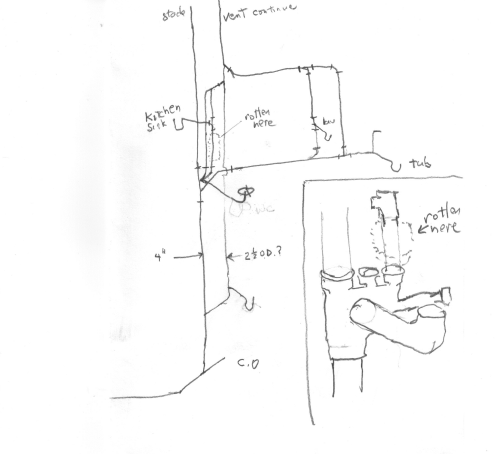 The kitchen sink connects to cast iron inside the wall. Just below the connection the section of vertical cast iron pipe is rotten and leaking. A couple of feet above it ties into the vent and right below it connects into a hub, part of a ginormous cast iron fitting that has the 4" stack, the outlet to the WC, a, vent for the WC, a Y out to the tub/lav: 6 connections in one fitting. It looks good, doesn't seem to have any of the rot.

I plan on cutting it out from above the kitchen TY to the hub below. It's kind of tight for any type of cutter. Is there a particularly good sawzall blade for this? Any tricks on getting the pipe out of the hub below? What is the best way unpack the fitting. What do I repack it with; can you still even get lead?

You're going to have to cut out the pipe, and replace it with PVC drain pipe. You can get rubber connectors (fernco) for the transition.

I would replace as much cast as is easily doable with ABS. I would cut above and below where the K sink drain comes in and replace everything back to the sink with ABS.

Is there a particularly good sawzall blade for this?

Standard metal blade will do - I just cut a 4" myself no problem. (EDIT - I just realized it was steel, not cast iron. Try a regular metal blade, but you may have to use one of the abrasive blades instead. They also have "score and snap" cutters at the home centers - looks like a length of motorcycle chain with a lever on it - never tried those.)

Any tricks on getting the pipe out of the hub below?

I would not do that - cut it (leaving a stub) and use a rubber sleeve connector in both locations. Get the ones that have the metal shell on the outside for support, since you will have a tee-ed in pipe hanging off.

I have (once) cut off a steel pipe entering a cast fitting, and then cut a wedge out of the remaining stub (all the way into the fitting) and hammered the rest of the pipe stub out - but that sucked, and I'm surprised nothing else broke.

On the other hand, the professional tool, a cast-iron "snapper", is simply a chain with a series of wheels embedded in it that look remarkably like giant glass cutter wheels. The cutter pulls the chain tighter and tighter until the iron snaps right at the ring of pressure points. It doesn't get "cut" at all. It breaks at the pressure point.

Along those lines, I've had excellent success doing the following: Use a 4" grinder to score a channel around the perimeter of the pipe where you want it to break. (A "groove" a "ring", whatever language works for you: a circular cut around the perimeter) Then drive a chisel into the gap in such a way that the chisel is acting as a wedge to cause the two pipe sections to split apart and break at the score line.

It produces a pretty clean, not perfect cut, but plenty close enough to use regular fernco fittings to connect to it from there. By far the fastest, least frustrating method I've seen, short of having the "right tool for the job"

Not the answer you're looking for? Browse other questions tagged drain-waste-vent cast-iron or ask your own question.

1
How do I Secure the Vent Stack to Replace a Section of the Waste Vent Pipe?

18
How do I replace this cast iron toilet flange?
5
Should second trap under kitchen sink S-trap be there?
2
Fix lead joint between cast iron and galvanized steel plumbing pipes?
2
Can I add a wye fitting to this cast-iron drain stack?
2
How to remove this PVC to cast iron adapter?
2
How can I convert this cast-iron cleanout to a proper air-gapped drain?
0
Connecting PVC to a 4.5 inch ID cast iron hub
1
How to fix drain pipe threads