Is there a type of interlock (transfer switch) that can be used for a generator OR solar panels?

For a new house, I've decided to install two breaker panels, one for critical loads like the well pump, lights, refrigerator and certain outlets, and a second for heavy and non-critical items like the oven, water heater, HVAC, etc.

Is there any type of transfer switch that would allow me to do either solar OR a generator as a second input to the sub panel, without having to shut off and rework the mains and change panels? If so, what type?

To clarify, it does not need to be a three way transfer switch, I would wire it initially with the second side of the interlock going nowhere, and add either solar OR a generator to the other side later, but not both.

I think 60 Amps should be enough to feed the subpanel. Most of the transfer switches I've seen on solar systems are designed specifically for solar, and let you switch individual circuits, and also have battery gauges, and other thing. I'm just trying to figure out if the same type if interlock used for a generator would work for solar instead.

Here's the rub -- transfer for a generator works differently than transfer for a hybrid solar setup (which is what you're probably envisioning -- forsaking grid-tie capability is simply not worth it unless you take the whole house off-grid). With a generator, the transfer means is essentially a big double-throw switch -- the common connects to the standby subpanel main, one throw goes to the feeder from the main panel, and the other throw goes to the generator (perhaps via an inlet). The number of poles depends on if your generator has a neutral-ground bond and if your standby system is 120VAC or 240VAC -- other than that, there's really not that much to it.

However, solar systems that are capable of operating a significant standby load in this day and age can also be set up to grid-tie when the grid is present -- to do this, they use a single throw transfer means that is basically internal to the inverter. The inverter output and standby loads connect to one side of the transfer means, while the grid input connects to the other side of the transfer means. As a result of this, they can operate stand-alone or grid-tied, but basically need to be in series with the feeder to take advantage of the latter, which is something you really want to take advantage of.

As a result, putting a box and set of splices in the middle of the feeder is the best plan -- this provides a "hook" that can then be used to install a transfer switch or hybrid inverter at a later date, given the drastically different connection requirements of the two. You could put what's called a bypass/isolation switch in with the non-bypass poles broken out separately so that you can connect a generator to the standby-side poles; however, standalone bypass/isolation switches tend to be hard to find, and are not necessary unless you are sure you are putting in a solar setup.

If you really want to spend the money now...

While premade, standalone bypass/isolation switches are quite scarce (they typically are shipped with things like UPSes), it is possible to wire a four-pole transfer switch as a two-pole bypass/isolation switch. Most four-pole transfer switches are quite costly, though, but there's an exception -- modular UL98 switches such as the TeSys VLS series from Schneider Electric are available for a reasonable price and can be configured for this job.

One caveat first though: this approach does not extend to generators that have bonded neutrals (i.e. are wired as separately derived systems). You'd need six (!) switch poles on each side, and it does not appear that the TeSys VLS series can be extended that far. Additionally, hybrid solar setups are never wired in a separately-derived fashion, so bypassing the neutral would not make sense in such a setup.

as well as an inch-pound torque wrench with 3/16" and M8 hex bits and a #2 cross-drive screwdriver for assembly.

Put the switch assembly together, then attach the parts to the back of the box (or subpanel, if you're using one -- the subpanel installs first in that case) as governed by the drawing below -- parts denoted by dashed lines install first, and the bold line denotes the front panel cutout needed for the switch. Note that if you're using the minimum specified enclosure, you'll want to terminate the far outermost black jumper wire onto the left and right power distribution blocks before screwing them into the box, or else hooking up those two wires will be harder than it needs to be. 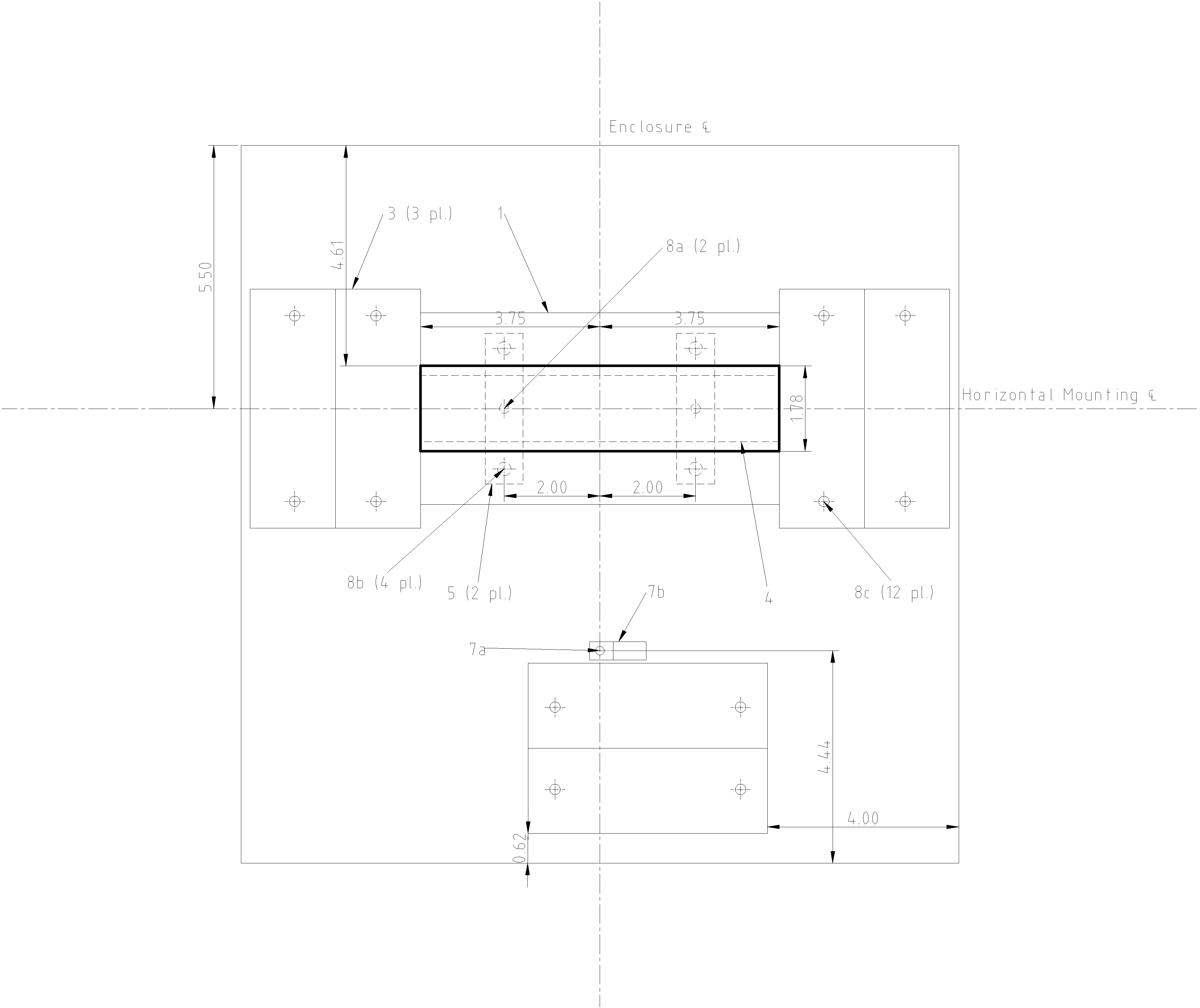 Once everything is installed into the box, then the jumper wires can be fitted as per the diagram below (the wires in the top gutter and between switch terminals themselves, as well as the green grounding jumper) -- torque the terminals to 120 in/lb on the power distribution blocks and 50 in/lb on the switch. Then the box is fitted into its final mounting location and wired (with the wires landing on the distribution block terminals). Once it's all wired up, put the covers on the distribution blocks; finally, put the front panel on once the cutout in it for the switch has been made. 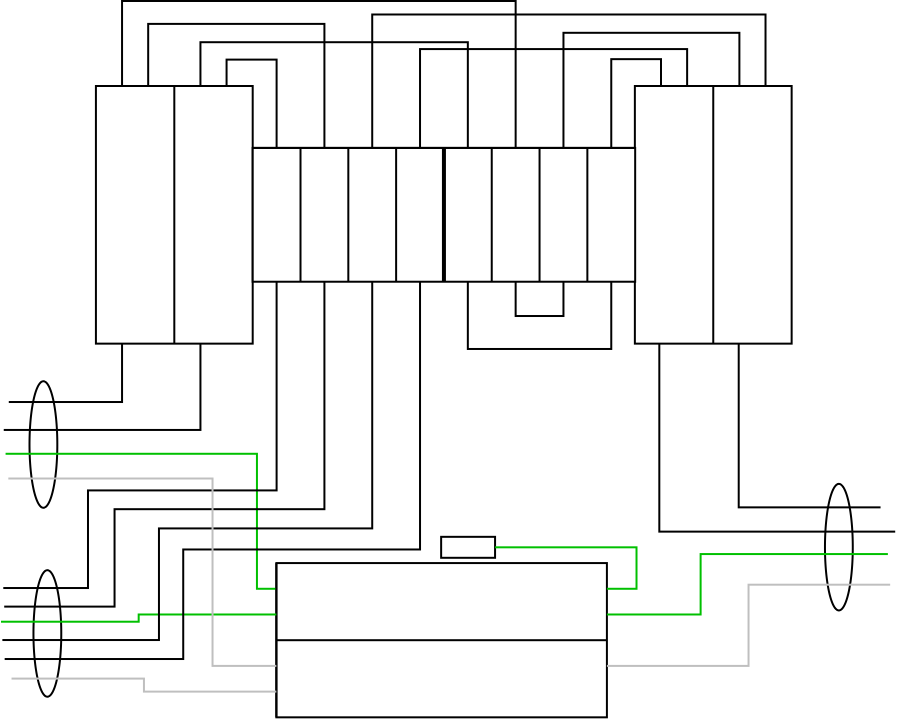 As to explaining this to the electrical inspector, all the parts specified that need to be (the blocks, box, wire, and switch) have appropriate UL listings, and the usage of the blocks here with the supplied covers conforms to NEC 314.28(E) as the box is big enough, the covers keep live parts from being exposed when the box cover is off, and there is sufficient wire-bending space.

Last but not least, if you need 100A here, you'll need to use 3AWG wire instead of the 6AWG for the jumper leads in the box (save for the grounding jumper), and use a 100A switch (VLSxP100R2x) instead of the 60A switch specified. (The power distribution blocks are rated for well over 100A.)

Not the answer you're looking for? Browse other questions tagged electrical solar-panels solar or ask your own question.