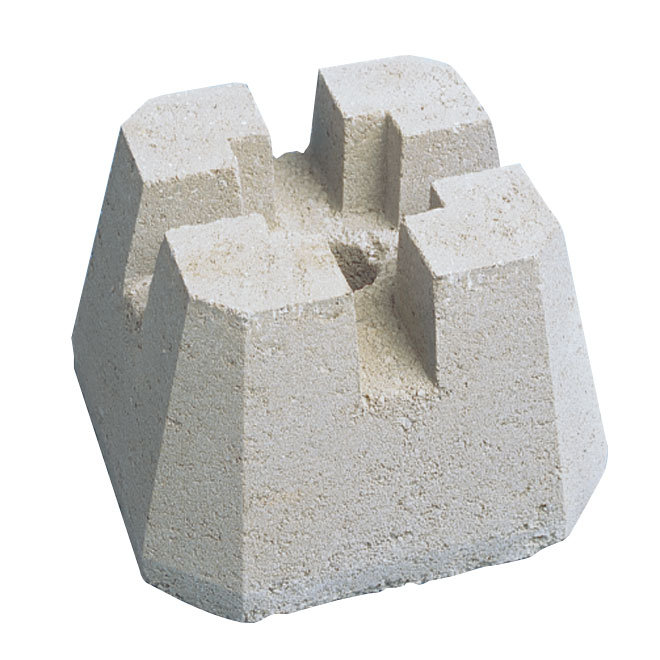 I want to place 4 of those in the corners and probably two-three in the middle on left and right sides:

My question is about framing: would it be OK to use 2x6 boards, or it is too weak and I should rather pick 2x8 instead ?

2x6 lumber should never be used for joists that span open air. Even on a deck. They're fine for fully supported floors, such as with full-contact rock or gravel bed foundations.

Then, since you're using those footing blocks it's not so much a matter of lumber size, but of footing interval. (You can't double the rim joists.) I'd use 2x8 for the whole thing, with the common joists on 16" centers (partially for structural reasons and partially to give you flexibility in decking).

Since you're using single rim joists (to fit the footings), I'd use four footing blocks on each of the 10' sides. This will ensure stiffness appropriate for the load of the common joists. There's really no reason to use more on the 8' rims, as they don't carry any more than the common joists in the middle.

I won't quote load tables or the like. I'm speaking from 30 years of construction experience. If you're going to need to pass inspection, run your plan by your city office for review.

Now, make sure they're fastened to the posts to support 500 lbs. at the corners and 1000 at the middle beam. (Usually we like to place the beams on top of the posts and then just use a clip to keep the beam from moving off the post.)

Also, if it's more than 30" off the ground, the deck will need guardrails and if it's adjacent to the house, it'll need lateral resistance attachments to the house.

By the way, 2x6 decking can barely span 4'. It will feel springy when walking on it. You could run the beams the other direction, add one more set of concrete footings, and use 2x6 beams (spanning 8', which will support 90 lbs. per linear foot.). Then, the decking will only span about 3'-3". Much stiffer.

Not the answer you're looking for? Browse other questions tagged framing deck or ask your own question.

3
Framing a cement room
3
Can I build a deck from reclaimed 2x4's?
3
Can I reasonably build a pergola on top of an 8'x12' deck?
3
Deck Footing capacity with BigFoot base
1
Freestanding deck - should I use joist hangers or bugle screws to attach joists to the bearers?
1
Can I frame over an existing deck with a new deck to raise the level?
0
Floating Dock Framing Length?
2
How can I frame a four-sided cantilever on a 10x12 freestanding, floating deck?