Can I perform a large ceiling drywall repair myself?

A leaky roof caused water damage to an area of the ceiling approximately 3' x 4'. The ceiling also has a nearby crack that seems to follow a joint, bringing the total affected area to about 5' x 8'. The room itself is 13' x 16': 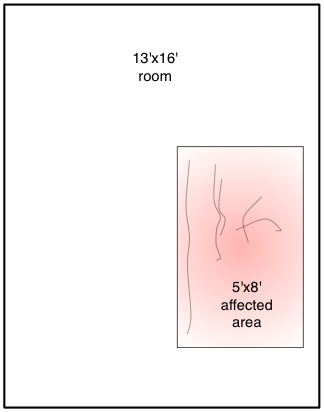 Is it reasonable to cut out an area of drywall that amounts to about 20% of the total area and patch it with a new sheet of drywall the way one would patch a smaller area? Is there anything that I should do differently for such a large repair? Finally, is this a project that a competent do-it-yourselfer can manage, or should I call a pro?

Yes, this is certainly doable, but I guess an assistant would be very useful when handling pieces of drywall and attaching them to the ceiling.

What you essentially will have to do is remove the affected drywall (not necessary to remove entire sheets - if a sheet is only partially damaged you can cut the damaged part away and leave the unaffected part) and then patch the area. No major difference compared to a small area patch - you will have to replace the damaged material entirely from one closest stud to another, studs are separated with rather small distance.

This will constitute lots of tedious work and will be rather dirty but it is certainly doable by a DIYer.

You can do it yourself. Since the ceiling has no texture, put in the patch, and spend some quality time mudding using the broadest knife you can manage. When you're happy with the appearance of the joints, and all is good and dry, prime the patch, then paint the entire ceiling, rather than trying to match the paint color. It won't be much more expensive than painting only the patch, but you'll be much happier with the result. Plan on two coats of a quality, relatively flat paint to make the patch disappear.

I second the idea of using a lift - your arms are going to be tired enough after the mudding and painting!

Not the answer you're looking for? Browse other questions tagged repair drywall or ask your own question.

4
What are the structural and health issues for a long-time slow-leaking toilet?
0
Cracked rafter fix and loose truss plates
0
Drywall falling from ceiling
0
How to fix cracked roof joist?
1
Could this crack in shower caulking be causing drywall damage to the subfloor?
2
How would you repair this copper drain pipe, and how much pipe would you replace?
12
Expedient repair for water damaged drywall behind tile
2
Water damage to wall drywall near ceiling - Should I repair or extract and replace?
2
How do I fix a large piece of drywall not matching up on a ceiling repair?