Why does my microwave keep throwing the circuit breaker?

I have a circuit that powers several things in my house:

Recently, this circuit has been thrown with alarming frequency when I use the microwave. No other combination of uses has thrown it. It seems especially likely to throw if the microwave is used after a big rain (when the sump pump is active).

This is not something I encountered in the first 2 years of owning the house, however it has happened a couple dozen times in the last six months.

Any ideas on what it could be and how to fix it? Will it cause permanent damage to not fix? If it's relevant, I plan to sell the house in about a year.

After rain is very easy to explain: your sump pump is coming on more often. The starting surge of sump pump is around 5A, and the microwave probably has a surge of at least 2A when it starts up.

Basement lights are easy to figure out, just add up the wattage of the bulbs (and current in Amps = # Watts / 115V). Likewise for anything plugged into the basement outlets.

Since the sump pump turns on and off at random times depending on the water level, it's likely that any time it tries to start while you have the microwave going it's tripping the breaker. When the microwave is on a lower power setting, it may not cause the same problem.

If possible, your best bet is to run a new circuit for the microwave: by the sounds of it, it's been retrofitted, and someone just picked the nearest circuit. I would try to find where it was added (assuming unfinished basement or at least access to the ceiling or other relevant areas), and add a junction box and a new line back to the panel, and give it its own 20A circuit.

Next best is to run a new circuit for the sump pump. You'll still have the issue with anything plugged into the basement outlets, but at least that's more controllable.

Circuit breakers can wear out over time, so probably the first thing to do would be to replace it (check your local codes to see if it's something you can do yourself or if you need to call in an electrician).

If you do have an electrician look at it, you might also consider splitting that circuit into two or more. A 1000W microwave will take about 9A (1000W / 115V for the magnetron, plus some overhead for the motor and the electronics), and the first few search results for "sump pump" show current ratings of around 10A. You're already close to the limit for a 20A circuit, even without any basement lights on!

I don't know much about sump pumps (don't have one myself), but electric motors generally take more power the harder they have to work, so if there's something clogging its intake or outlet, clearing it might solve your problem.

It seems especially likely to throw if the microwave is used after a big rain (when the sump pump is active).

As well as the load as mentioned by Niall, any moisture in the air can affect electrical circuits. So if your breakers are in the cellar - where it's damper - that might be enough to trip it.

Seems Donna Ryan's answer is greyed out, partially for good reason. (Changing to higher power breakers that were not designed for the wiring is not safe and does cause a fire hazard.)

However, she has an EXCELLENT suggestion that I'd never have thought of. For those that have an old style stove that has an auxiliary outlet, using this "Aux outlet" MIGHT work in some instances. Here is where and when it will NOT work, or might cause other problems:

The key to the problem here was given by @GregMac when he said that the startup power was likely 2A, which can tip you over your 15A or 20A breaker. I'm now wondering that if in some microwaves, that 2A isn't a little bit low and draws more power than that.

@GregMac is a bit wrong about "running the microwave on low vs high power" though. I've replaced several magnetrons and so I'm familiar with the circuitry of most microwaves. Power is either applied to the "transformer / diode / capacitor" supply and the magnetron, or it is not. The "low" is provided by turning the magnetron on and off, usually some fraction of 30 or 60 seconds or so. This makes the problem WORSE, since the microwave is starting every time it cycles. In my instance, most of the time mine trips the breaker when in low, and not the first time it is started.

Personally, I will consider replacing the breaker and see if that helps, since I don't have anything else in my 20A circuit when it trips. Although it is possible that the transformer could have some shorted windings, it appears they are built like tanks and should last forever. (WARNING -- Do NOT replace the microwave's magnetron yourself, unless you KNOW what you are doing, since it can and DOES kill many that try, and they die WHEN IT IS UNPLUGGED!)

I think if there was some device made that would limit or eliminate the surge during start, most of this problem would be eliminated. If anyone knows of some method or device, I'd be interested in learning about it.

@Donna Ryan's answer might be removed at some point, (or even better, just EDIT that part and warn others to NOT replace with a larger breaker). So I thought I'd repeat WHY her suggestion likely works:

Donna --- Advise others to not "put a higher powered breaker" in, and then your answer is very good and VERY useful. (Steven and BMitch are right).

Why does your method work?? Your stove has it's own 220v DOUBLE circuit breaker with a (likely) much higher amperage rating to run itself. Even though you are only using one of the 110v sides, it is still isolated from other circuits, so if stove is not running it is VERY likely to work better that way, than your regular outlet.

The microwave transformer is probably taking a large surge current on startup. What happens is, the transformer saturates on startup. The magnetization current normally passes through zero at about 1/2 way through each 1/2 cycle. If it gets turned at the beginning, the mag. current starts from zero instead of -peak, so it heads towards double peak and saturates the core. The coil then behaves like an air core coil, so the current goes through the roof, and all the excess flux passes straight through the saturated core to the steel case underneath, causing that characteristic THUNK. The transformer needs to be turned on 1/2 way through a 1/2 cycle. Don't worry about the capacitor on secondary. The secondary is loosely coupled & the flux can bypass it through the magnetic shunts if necessary.

As far as I know, all of the microwave oven processors use the supply frequency as their clock, which means, the relay pickup will be synchronised to the supply. If there is no little silver can with a crystal in it, it will be, especially if it THUNKS every time the relay picks up. If so, You could try this super simple delay circuit I designed in place of the transistor that drives the transformer relay. Remove the transistor, set the pot fully CCW and install this circuit in place of it. Bend the wires as shown so they will bend if bumped and not push the tracks off the main board, then, with the power set low, so the relay drops in & out, adjust the pot until the transformer just stops thunking. Then count the turns until it just starts again, and set the pot ½ way between. That will switch the transformer on in the middle of a ½ cycle when the magnetisation current would be crossing zero. Let me know is it works. If there is not enough adjustment, change the capacitor to .022uF. Cheers! 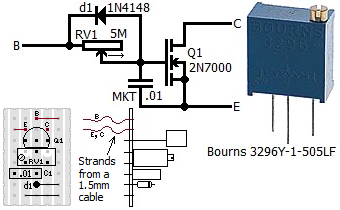 I have that problem with my microwaves throwing the breaker all the time so maybe I do need to replace the breaker but what I do that works, I plug my microwave into my stove outlet. I have had three microwaves over the years and all of them would throw the breaker. I've also thought I could put a higher powered breaker into the fuse box.

3
Why does my circuit breaker keep tripping?
5
How can I fix flickering and continuous-clicking with a UPS on an inverter-supplied circuit?
2
Why does my new switch keep tripping the breaker?
2
Basic Circuit Breaker trips inconsistently, persistently
2
Wiring new light switch
0
Oven "flickers" in power every now and then
2
Does my electrical service have capacity for an 80A EV charging circuit?
2
What are benefits of a subpanel over pre configured 6 , 8 or 10 circuit Transfer Switch Kits? which one is better for Portable Generator?