I am preparing to replace most if not all of the wiring in our house. It is old, some of it is dangerous, and almost none of it is grounded. For some time I have been interested in home automation, and one of the things that I would like to accomplish with this electrical refit is to install some consumption monitoring.

Now I have seen some products that essentially clamp a current meter to the wire coming out of the circuit breaker and then that plugs into a little box that can be queried by software to get current load on the line. This is all well and good but it looks like that gets really crowded in the load center real fast, and is really geared toward people who do not want to buy new breakers/load center, etc.

I am replacing both, and I am on the lookout for some kind of breaker that can not only trip under higher load conditions, but also report the load at any given time.

I saw these Square D breakers that are part of the Wiser Energy product line, but the literature makes it sound like the monitoring they do is specifically for power outage situations where power source needs to be switched from grid to backup or something.

Has anyone encountered load center and circuit breaker products that meter the current and can report (either by custom software or supplied software)?

Couple problems with that particular product. #1 it's $480. #2 using it means you can't use an AFCI or GFCI breaker there, and you will need a lot of them in a rewire.

The latest whole-house monitoring systems don't put a clamp ammeter on every circuit. They put them on the main feed for that panel, L1 and L2. They distinguish one load from another by the type of noise it places on the line, inrush current, interval it operates on, that kind of thing. They really don't care which circuit the load is on. The installation is fairly neat.

As a long time proud user of home automation and home energy monitoring systems, I'll share my perspective and make a recommendation.

I installed Efergy three years ago. I installed The Energy Detective about 18 months ago.

Efergy requires transmitters outside of your cabinet that plug into the CTs inside. Depending on what generation of their product you buy you may have to change batteries, or may have to plug in a wall adapter to an outlet to power them. 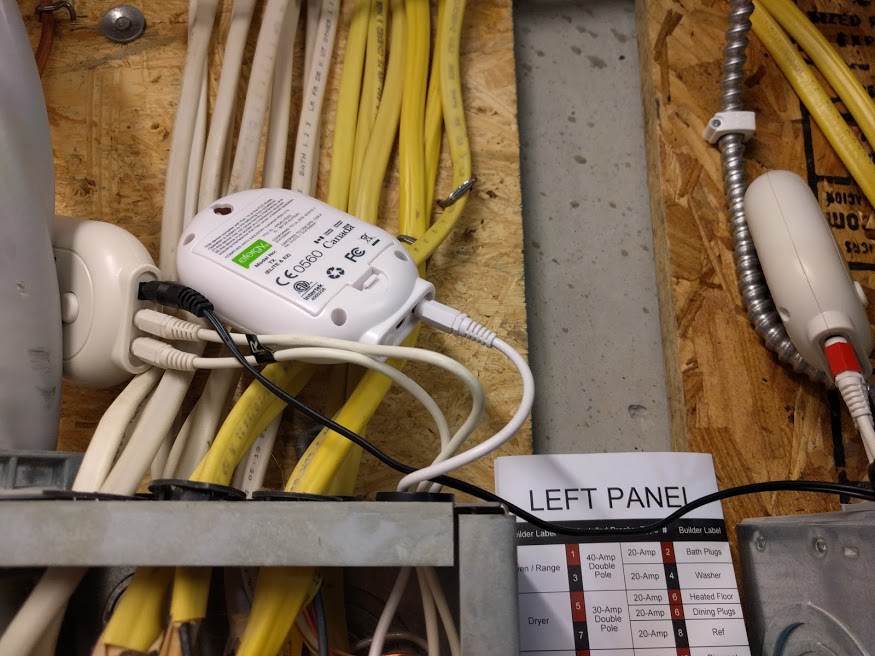 Because of the price tag, I did much research before buying in to TED. I considered designing my own with CTs and an rPI. I was aware of systems that tried to pick up on 'noise signatures' of appliances, but I don't trust that they would be accurate, or be able to distinguish my loads from those of the couple neighbors on the same transformer. I also feel uneasy about appliance/circuit level data leaving my possession. The one device I recall seeing that did that kind of signal analysis seemed very expensive at the time, gimmicky, and I can't find the company any more, so I think I chose right when I went with TED.

TED comes with insulated snap-around CTs for the utility main breaker connection of course, but to reduce cost and clutter per branch circuit, you're expected to pass each load wire you want to monitor through a solid doughnut shaped insulated CT. There's special instructions for split phase circuits, or combining the measurements of multiple circuits. The install process is documented well and the manual is short and to the point.

TED lets you monitor two main breaker cabinets, local generation, and 32 branch circuits, concurrently. All data is transmitted over the power-line to a receiver unit with Ethernet that stores the data, serves a web application locally, and even sends email notifications of thresholds you set, directly from your own network with NO dependence on TED the company's infrastructure (the only offering with that level of independence).

TED additionally offers a free cloud service, but it is not necessary if you don't care to view it from outside your house, or if you know how to securely proxy connections in. (PROTIP, I wouldn't want my TED unit publicly accessible. I don't expect it has been security hardened.)

Both TED ad Efergy have been finicky from time to time. TED's tech support has been WAY better though. Efergy took MONTHS to resolve account/database issues in their cloud app, which is the ONLY way to view data on their platform. I had to track down London office numbers and time my calls to get to anyone at Efergy. TED gets back within a business day.

TED looks way better designed to me from a safety perspective, and depends on no batteries. Unlike Efergy, TED doesn't have any wires that run through the wall of the breaker cabinet.

TED can bring a lot of extra wire into your breaker cabinet though if you max your system out like I did. I used adhesive backed pads and zip ties to route the wiring. Some of my CTs are monitored by a 'brain box' in the opposite cabinet so I used solid conduit to pass those wires through. I can see flashing light from the heartbeat and tx LEDs shining through the gap between the last breaker and the front panel which is a little annoying. I might be concerned about having active electronics inside the panel, but that cat was out of the bag when arc faults came along.

All in all, I still think it looks crowded, but I find it tolerable, and I do not regret the expense in time or money.

If you have only a single panel and want it to look as tidy as possible, you might consider adding an enclosure adjacent to it connected via conduit and placing all of the TED electronics in that. The wires are probably long enough. 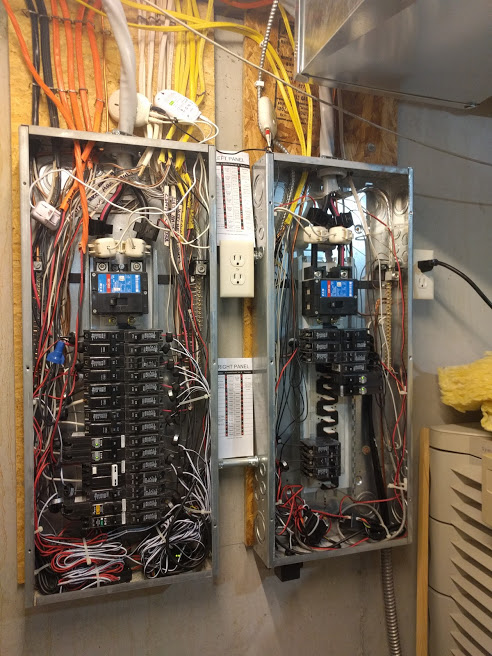 Detail: CTs (Make sure to get these the right direction around): 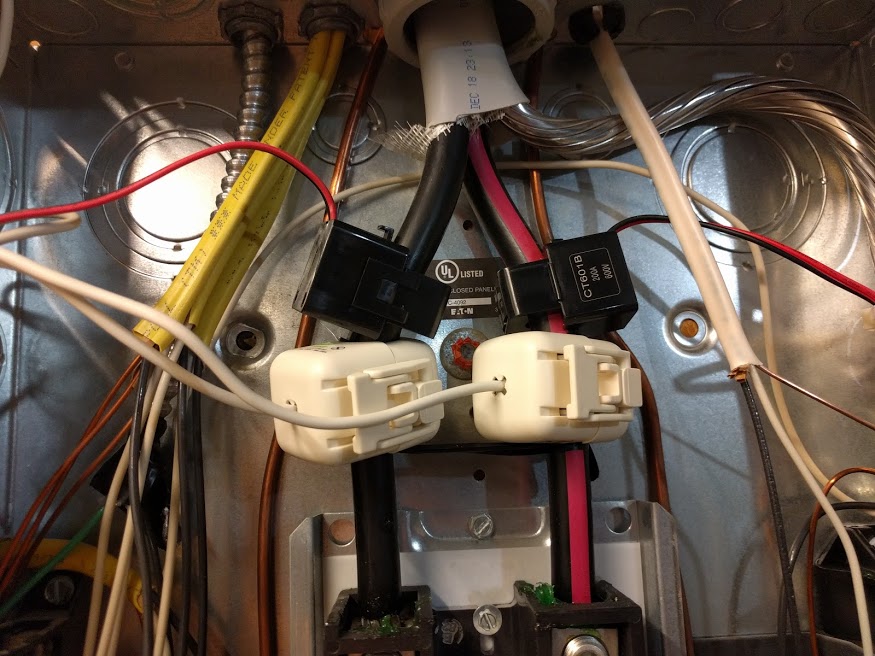 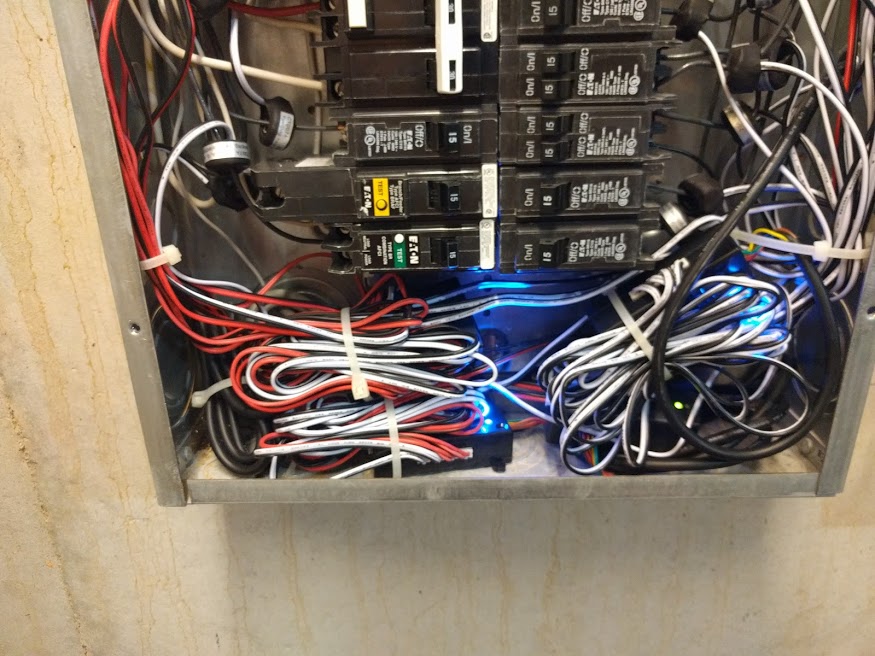 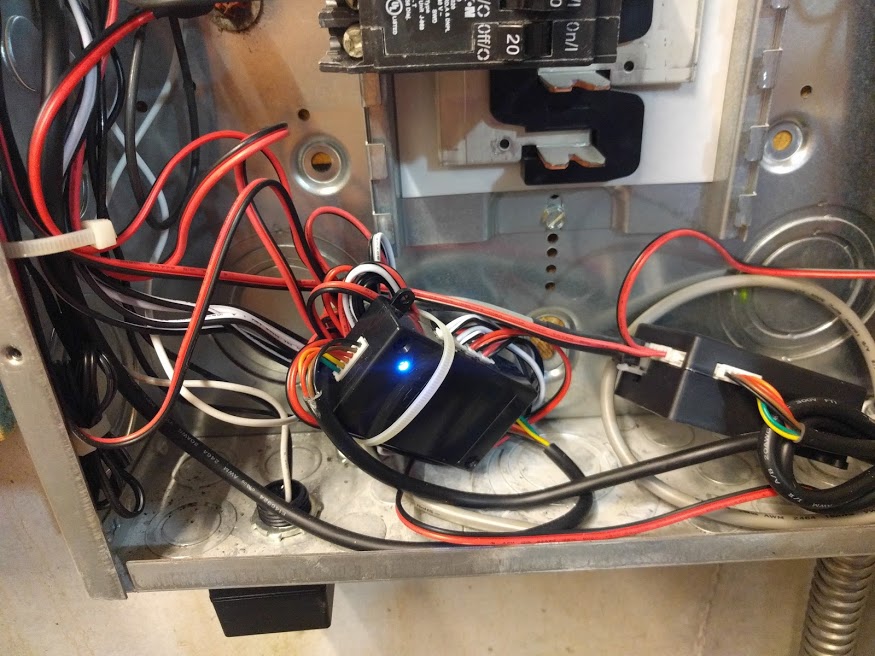 Not the answer you're looking for? Browse other questions tagged circuit-breaker home-automation or ask your own question.

1
GE Load Center Q's
3
Is one circuit connected to two breakers safe?
2
How to tell if breaker box can handle another tandem breaker?
2
How to add a secondary circuit breaker, limited to cutting a single appliance
0
Optimal Breaker Configuration for Split Phase Mains Power
2
Power everywhere after turning off the main circuit breaker
0
Breaker Tripping - Need advice on upgrade
3
Why do shared apartment homes have two sets of individual circuit breakers?
1
2 wires with same neutral in a tandem circuit breaker on the same leg
7
Main breaker and branch breaker tripped simultaneously