If I install a GFCI on the first outlet in a circuit will the other receptacles on that breaker circuit have GFI protection?

I have three electrical outlets in my garage which appear to be connected to one circuit breaker.

I am assuming the outlet closest to to the panel is first in the three receptacle circuit.

How can I test this assumption?

There's really no substitute for opening boxes, unhooking wires and turning the circuit on and taking measurements.

You open up your believed-closest box, and remove the wires you think are downstream (away from the panel). Tape off the loose wires so they can't short against anything, and plug a 3-light tester or nightlight. Then go turn the circuit on, and see what lost power. If all the other receptacles lost power, you're in the right box. Otherwise try another box.

If the receptacle still has power, you've identified the supply wires. Otherwise touch the loose wires with a non-contact voltage tester and see if you can find the lit-up hot, or just power down and try a different pair.

Usually there are only 2 pairs. If there are more than 2, you may need to disassemble a pigtail. This is also a good time to do housekeeping like make sure your wires are on screws (not unreliable backstabs), upgrade to the $3.00 receptacles instead of the 50 cent builder grade cheapies, and upgrade to 20A (T shaped neutral) sockets if the circuit is indeed 20A and you expect to use those.

GFCI+receptacle devices are very confusing because they are doing two things. Let's break it up.

What is a GFCI?

That's it. To signify the protected side, I use brown and gray wire in conduit work, but you can do the same by tagging wires with brown and gray electrical tape. It can be a circuit breaker, or a dedicated black box. If that's hard to visualize, look at this.

This is a GFCI device in its purest form: a "deadface" GFCI. You can only hook this up just like the diagram: supply wires to LINE and downline load(s) to LOAD (otherwise what's the point?)

Since you have first location and supply wires identified, do exactly that. Pigtail the loads if necessary, though some GFCIs use screw-and-clamp to allow 2 wires on a screw.

Be prepared to install a box extension if the box is too small to fit the GFCI device and the wires.

How do you get sockets at the deadface location? Well, heh heh, I don't seriously expect you to use a deadface when you could use a GFCI+receptacle... it's just better for illustration. But here's the gotcha: Since the sockets are pre-wired to the LOAD side, it's possible to miswire a GFCI+receptacle, attaching power feed to the LOAD side - in which case the outlets will be energized but the GFCI will not protect.

How to test for GFCI functionality

Use a simple GFCI tester. Most of them come as part of a 3-light tester, in which case get a simple one**. 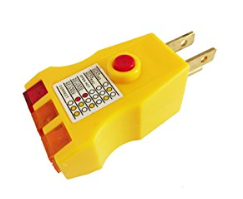 You just push the button, and it induces a hot-ground fault which should trip a GFCI protective device. If it isn't obvious, put a "GFCI Protected" sticker on the receptacle.

Now, this external tester will not work if the receptacle is not actually grounded. (there is no way to induce a ground fault without a ground). In that case, get a 3/2 prong "cheater" and extend the ground wire/tab with other wires, to reach a place with an actual ground. Plug the tester into that and it should work/trip.

Once it passes, also put a "No Equipment Ground" sticker there.

Now if this is a GFCI device and testing it also trips another one, then most likely it's fed off that other GFCI's LOAD outputs, which makes it redundant. Remove it and put it somewhere that matters.

** Especially avoid the ones that have digital logic to "help make the lights make more sense": you are much better off with a simple one and interpreting the lights yourself than using the silly legends. The words describing the light combinations, I call them the "magic 8-ball". But the lights are useful.

You can test it as follows:

Yes, you can use the first outlet in a circuit to protect downstream outlets if they draw their power from the LOAD side of the GFCI outlet.

Depends on how you wire it. If you connect the downstream outlets to the "load" terminals then yes they will be protected.

However to do that requires a few things.

The one thing I would add is that 'code' may restrict the number of plugs you can put on the load side of the GFCI outlet. When I built my garage I had to remove 1 or 2 outlets from both of the circuits I had wired because code only allowed for two outlets on the load side of the GFCI device. In his post yesterday, bib stated "Yes, you can use the first outlet in a circuit to protect downstream outlets if they draw their power from the LOAD side of the GFCI outlet." Make sure you follow this advice. If you wire it wrong you'll think you have protected outlets when you really don't.

7
Why does my GFCI outlet trip as soon as the breaker is turned on?
1
Will the last electrical receptacle on the same circuit have two cables entering the box?
1
Outlet trips GFCI and Circuit Breaker. Help!
3
help me interpret the results of an outlet tester on some GFCI receptacles
0
Will gfci receptacles trip before a gfci breaker on same circuit
2
Will a Tripped GFCI wired at the end of a circuit kill power to all receptacles in that circuit? (Panel Breaker not tripped)
0
Water Test for Grounded GFCI Outlet did not trip outlet TEST button or actual Circuit Breaker
0
Put in a GFCI circuit breaker and get rid of 11 GFCI receptacles