I am wondering how to read the numbers on electrical wiring separated by slashes such as 12/2. What do the numbers refer to? What other numbers should I watch out for when purchasing wires to be run within the walls and sockets of a home? P Thanks. 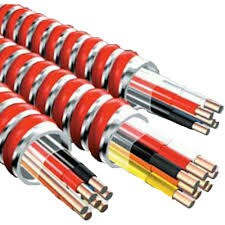 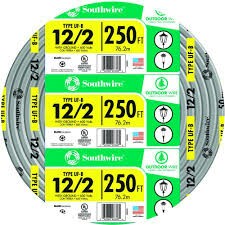 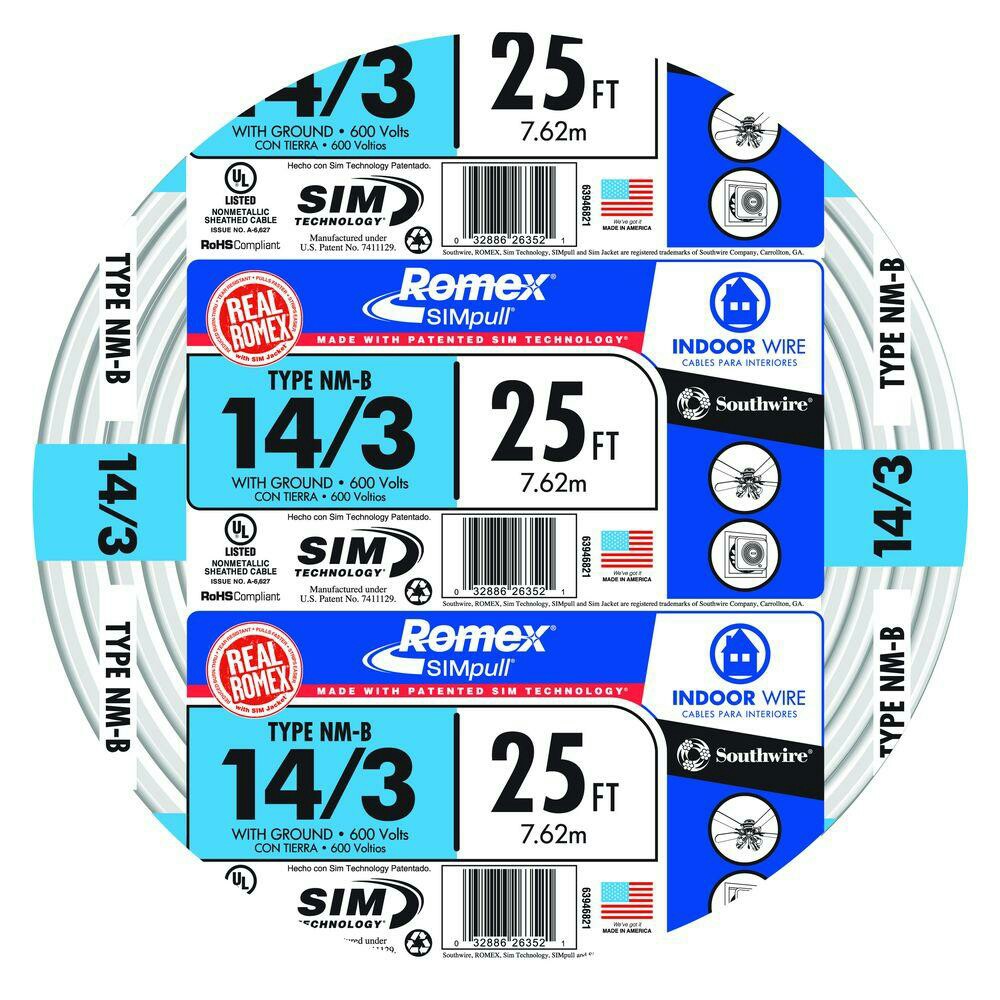 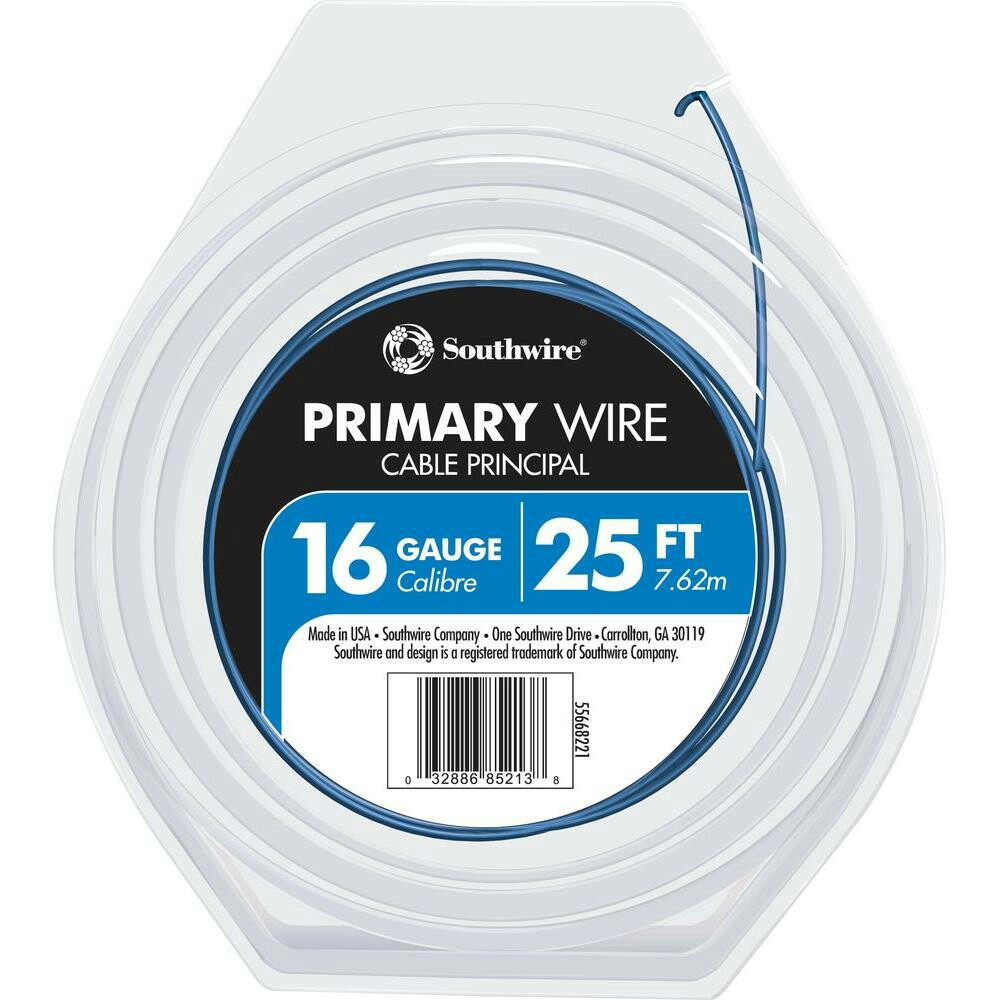 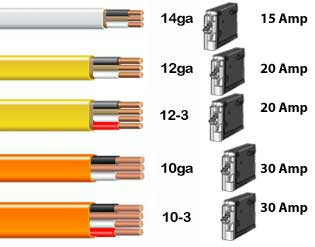 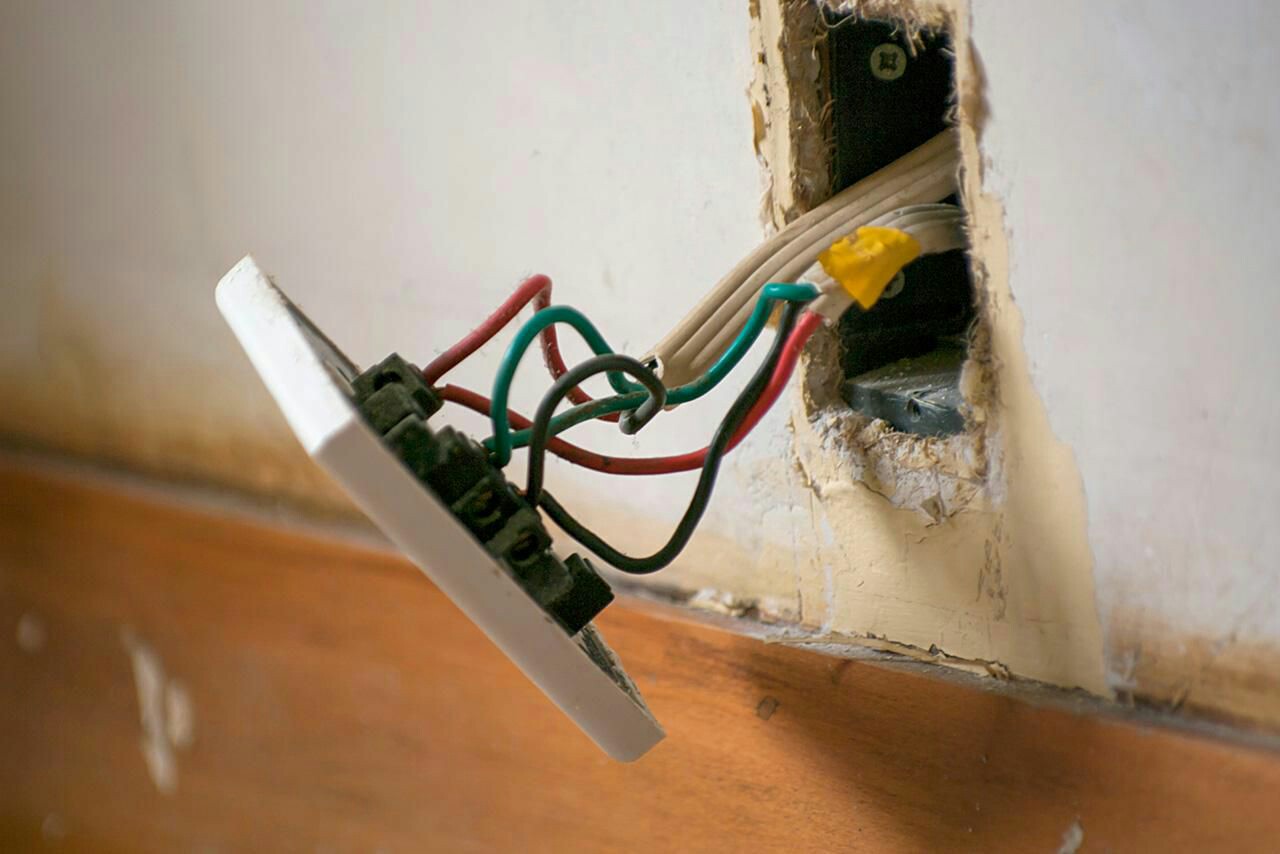 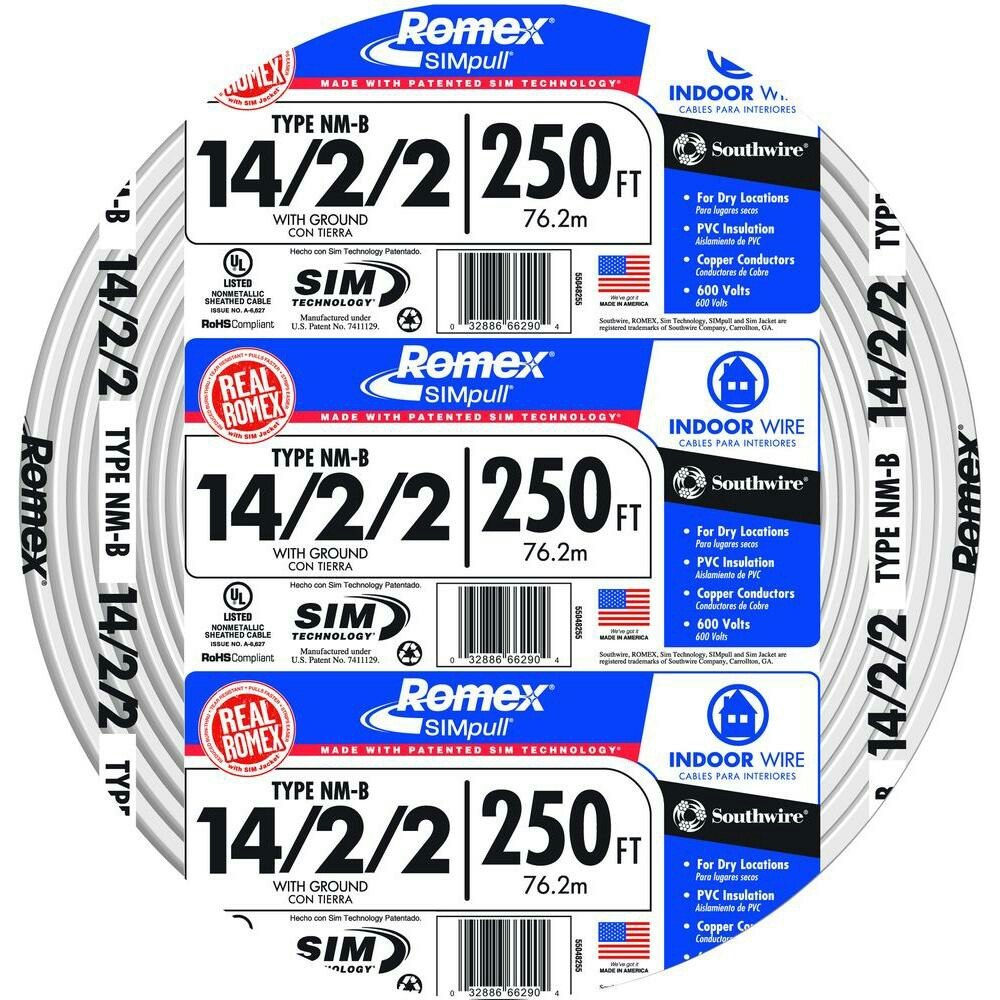 There are several designators you need to pay attention to when looking at wire/cable, and they aren't always in the same order, depending on whether you're looking at single wires or multi-conductor cables and cords.

Single wires in North America have two designations: a gauge and an insulation type.

The wire gauge is given in AWG, and determines the size of the copper wire inside. Smaller numbers are given to larger wires (this sounds backwards, but it's an artifact of how the scheme was originally developed) and larger numbers to smaller wires. 14AWG is used for 15A circuits and 12AWG goes with 20A circuits, if you're talking about copper, that is. Larger sizes (such as 10AWG) are used for heavier circuits -- NEC table 310.15(B)(16) controls the ampacity of wires and cables in conjunction with several derate rules for special cases (such as wires in toasty places, or bundled together).

The insulation type is what determines where a wire can be used -- inside, outside, strung between poles, wherever. Uninsulated (bare) wires are the simplest, but since you can poke their conducting bits with your finger, they're only suited for grounding, where it normally doesn't matter that you can do that.

The most common type of insulated wire in building use is THHN (Thermoplastic, High Heat resistant, Nylon jacket)/THWN-2 (Thermoplastic, Heat resistant, Water resistant, Nylon jacket). This is a PVC insulated wire with nylon jacketing protecting the PVC from mechanical damage and providing low pulling friction. It is flexible and inexpensive, but can be a bit misbehavior-prone when subject to high electrical or mechanical stress. It's also available in a wide variety of gauges, from "lighting circuit" to "large feeder", and in solid or stranded wire -- the latter is easier to work with and more flexible, but is not compatible with some types of terminations (such as those silly backstabs).

Now we come to the superstar of the bunch, XHHW-2 (X for crosslinked polymer, High Heat resistant, Water resistant) wire. This is a crosslinked polyethylene insulating material (think PEX pipe) that has excellent mechanical and electrical properties and a pricetag to match. It can withstand high temperatures, high voltages, and mechanical stresses far better than PVC without needing near as much of it as RHH/RHW, so it's used for heavy feeder and service wiring nowadays.

Riding the pine for the most part is a type of wire called TFFN (Thermoplastic, Flexible Fixture, Nylon jacket). This is used for the wire inside light fixtures, ceiling fans, and suchnot -- it is available in smaller gauges than THHN, and is more flexible, but otherwise has mostly similar properties.

Avoid things like AWM (appliance wiring material) and Primary Wire (automotive wire, IOW) -- they aren't legal for use within buildings, as they are typically PVC-insulated without a nylon jacket to protect the PVC from the rigors of conduit pulls.

A multi-conductor cable or cord in North America will have three or more designations: a gauge, one or more wire counts, and a cable construction.

The wire gauge is as before, only applying to all conductors within the cable (save for the ground conductor in a few oddball instances, but we won't go into detail on that).

The conductor count, of course, determines how many conductors are in the cable. For building cables, this does not include the ground wire -- its presence is denoted by a separate W/G (with ground) designator that is often omitted due to its universal presence in this day and age. However, cordage (the stuff extension and power cords are made from) does include the ground wire in the wire count. Multiple wire counts are used to indicate a multi-circuit cable, such as a 14/2/2 NM cable or a 12/4/4 MC cable, that has more than one neutral wire in it -- otherwise, there's only one neutral (white/grey) and the rest of the wires can be used as hots, switched hots, messengers, or control wires.

The cable construction determines where the cable can be applied, just like with single wires. However, cables are generally designed to be used on their own, not in conjunction with a raceway -- pulling cable through raceway is a hassle on a good day.

The most common cable indoors is NM (Non-Metallic sheathed cable), commonly called Romex™ after Southwire's trademark for the stuff. It consists of two to four PVC insulated wires and a bare ground with a PVC jacket separated by a paper wrap; this makes it low-cost and relatively easy to work with. It's widely available in all the common branch-circuit gauges (14-6AWG) although 10, 8, and 6AWG cables are typically not available in /4 or /2/2 constructions.

Since NM can only be used indoors, you need a different kind of cable for outdoor or wet locations, and that's called UF (Underground Feeder). UF is similar to NM, but without the paper wrap and with more water and UV resistance in the jacket and insulation -- this allows it to survive being rained or shone on. UF cables are not much more costly than NM, and come in a similar variety of gauges; however, you usually don't run into /4 UF.

Service drops are wired using what's called SE (Service Entrance) cable -- this is a multiplexed/twisted (Style R) or concentric parallel (Style U), jacketed construction, available in a variety of fat-wire sizes for use for feeders and services, inside and out. It can also be used to wire jumbo branch circuits where NM or UF is no longer fat enough for the job. It is somewhat costlier than NM or UF cable, and like UF, is not available in /4 as a general rule.

Next, we come to the metal-armored cable family, which has two members: type AC and type MC. Type AC (Armored Cable) is the older of the two, harkening back to the days when "BX" was the new hotness. (It's still made according to UL 4, if that's any indication!) It has metal armor protecting two to four paper-wrapped insulated wires of any typical branch-circuit gauge as well as a thin bare wire in contact with the armor that serves as a "bonding strip" that allows the armor to act as a ground. It's reasonably common to see this in older homes and apartments, but can still be used in indoor work to this day, despite being quite limited compared to more modern MC cables. Of course, the metal armor makes it more expensive than NM, as well as limiting its mechanical flexibility and causing handling difficulties.

The newer kid on the block is type MC (Metal Clad) cable. In "traditional" MC cable, the armor is only provided to protect the conductors, and the grounding conductor is separate, with a plastic assembly tape used to keep the conductors together and from being messed up by the armor. This has the downside that the armor, although grounded, is not a grounding means -- a green ground wire is provided instead. Otherwise, it's similar in use to AC cable, albeit more versatile -- you can get versions in much larger gauges for feeder or service work, with 3 or more circuits' worth of wire in them, and with a PVC jacket for outdoor, wet-location, direct-bury, or even in-slab usage. A newer variant called MCI-A (MCAP™ from Southwire, MC-Quik™ from AFC, or MC-SmartGround™ from Encore Wire) omits the insulated ground wire in favor of a bare ground wire in intimate contact with the armor -- this provides the best of both the AC and MC worlds.

Last but not least, we come to the various flavors of cordage -- this is the stuff extension and power cords are made from. Parallel (flat) cords are designated SPT and are used for light-duty work, while jacketed cords are designated S or SJ with O and W suffixes for oil or water resistance -- the jacketed-type cordage is what "heavy duty" outdoor extension cords are made from. Cordage is much more mechanically flexible than even NM cable, using finer stranded wires and a more flexible jacket; however, it lacks some of the robustness properties of NM, which is why it CANNOT be used for permanent wiring, save for a few exceptions (such as pendants to light fixtures). Cordage typically comes in two-wire and three-wire versions, with the occasional four-wire cord present as well (think dryer or range cord in this day and age), and in a variety of specialized types for specialized uses such as range/dryer, heater, vacuum, or electric car use in addition to the general-purpose cordage types mentioned above.

Other types of cables exist, but are used for either low-voltage communications and control applications (such as types CM and CL2) or specialized work.

The first number is the gauge (diameter) of the metal part of the wire using American Wire Gauge.

The second number is the number of insulated conductors (wires), not counting the bare ground wire, contained in the cable.

Also, referring to your third picture, you cannot use 16 gauge wire for power and lighting circuits.

If you find 14/4 it will have a blue wire instead of the red/white.

The main advantage there is that you can use it wire a three-way switch and leave the required neutral. You can also run two switched hots and leave a neutral.

You should also note the differences in the cable. Your first picture is of Romex UF wire, which is used for below-grade or outdoor installations. NM wire is used for indoor only.

5
What do fractions mean when talking about electrical wiring

6
How can I add/alter wiring inside single-brick walls?
1
How can I trace an electrical cable?
0
What is the easiest way to "detect" electrical installations (wires in wall)
1
Run new electrical wiring in backyard from existing wall outlet
1
Where is American Wire Gauge (AWG) used? European standards
3
How to run romex around window with no studs?
0
Requirements for electrical wiring project for a house
1
How to insulate exterior walls with electrical wiring
2
Home Electrical AC Wiring Layout & Estimation Questions