outlet not working but grounding screw is hot

I've got a non-working outlet that I can't seem to fix.

It's got two black wires, two white wires, and no ground wire.

When I turn the circuit back on, the outlet does not work, and I detect no current in either the hot side or the neutral side. BUT the ground screw IS hot. Yet as i say there is no ground wire to attach.

This is a weird circuit, tied in to a dishwasher and another light. The light works when the circuit is on, but the outlet and dishwasher do not. An appliance guy said he was getting current on the hot wire on the dishwasher, but not the neutral wire, and thought replacing this broken outlet would fix things. But I can't make the outlet work. 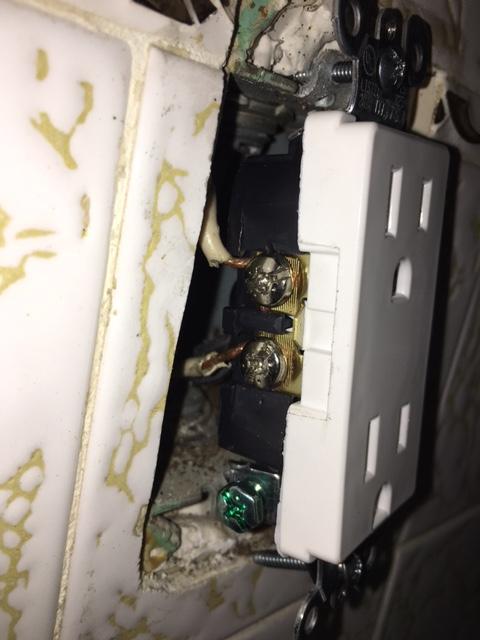 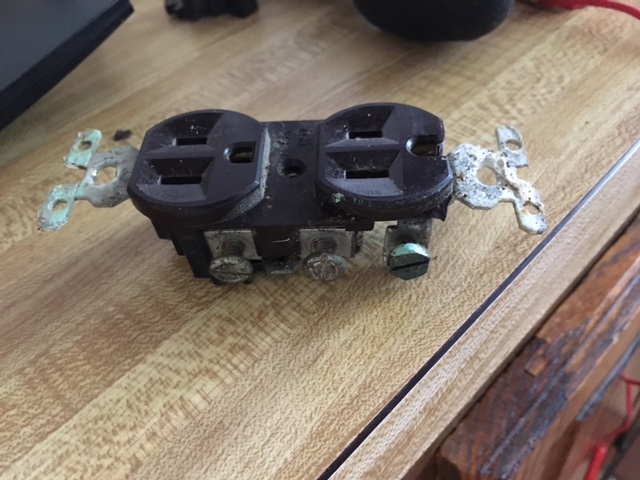 The original outlet. It was installed upside down; I shifted the black and white wires in order to install the new one in the normal orientation. (Maybe that matters?)

I learned the outlet was hot by accident. Assuming it was all dead (having tested the black and neutral wires and screws with a two-pronged voltage detector, and since the outlet wasn't functional), I started to screw it in before seeking help here or from an electrician. There was a significant spark. I then used the voltage tester on the ground screw, and the light went on.

Despite the tile, this is nowhere near water; it's decorative tile on the opposite side of the kitchen from the sink.

Original box, showing the two black and two white wires. AS mentioned, the previous outlet was installed upside down, with black on the left and white on the right. No evident ground wire. 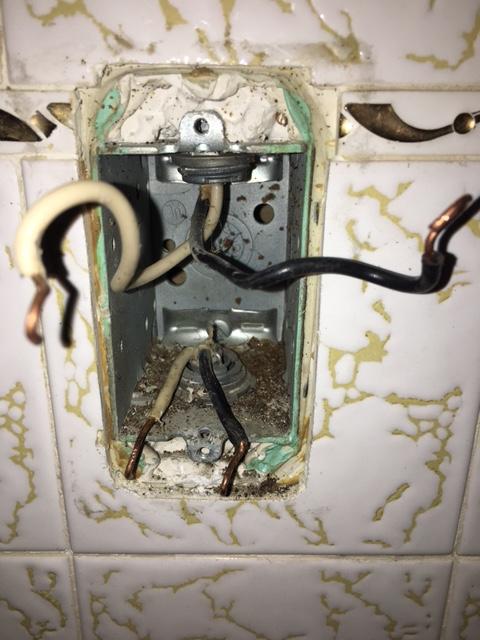 It's not metal conduit, those are Romex clamps.

The first problem is that you have power on the receptacle somewhere when you expect not to. So keep using that voltage tester. There are lots of ways to use a voltage tester wrong, but this for sure: it should never light up on a dead circuit. if you have turned the circuit off, and it is not dead, it is now very important to find out which other breaker you must turn off to make it actually dead. It's likely these two breakers together form a multi-wire branch circuit, which share a neutral in an engineered way which works. However there are certain rules MWBCs must follow, and if they do not, they become nightmares, with symptoms like these. We need to know if 2 breakers feed that circuit so we can work that issue... if it's an issue.

Looking at that melted neutral, it would also matter to know exactly where in the service panel those two breakers are. That super matters.

It would also be good to know if this installer was habitually using white for hot and black for neutral. (Maybe he was British?)

It would also be good to get a length of wire so you can get a reliable ground from some place like a sink, spigot, water pipe etc.

Aside from that, screws shorting against the metal box could contribute to the problem. Wrap the receptacle with tape edgewise to stop that from happening.

The reason that you see two sets of blacks/whites on an outlet like this is that one set feeds in power from upstream and the other set branches out to some other part of the circuit downstream. The outlet doubles as a joining block to bridge the black to black and the white to white.

0
Replaced outlet still not working
2
Wall of 2 switched outlets not working
3
Did I replace receptacle with exact same configuration?
0
New light switch not working
2
Replacing outlet; found one white wire hot. How to connect?
7
To break or not break tabs when installing an electrical outlet
4
Hot wire stripped in the middle, wrapped around a screw. How can I replace with GFCI receptacle?
1
Why run the same phase twice to a series of outlet?