Breaker tripped when I was away for the weekend. 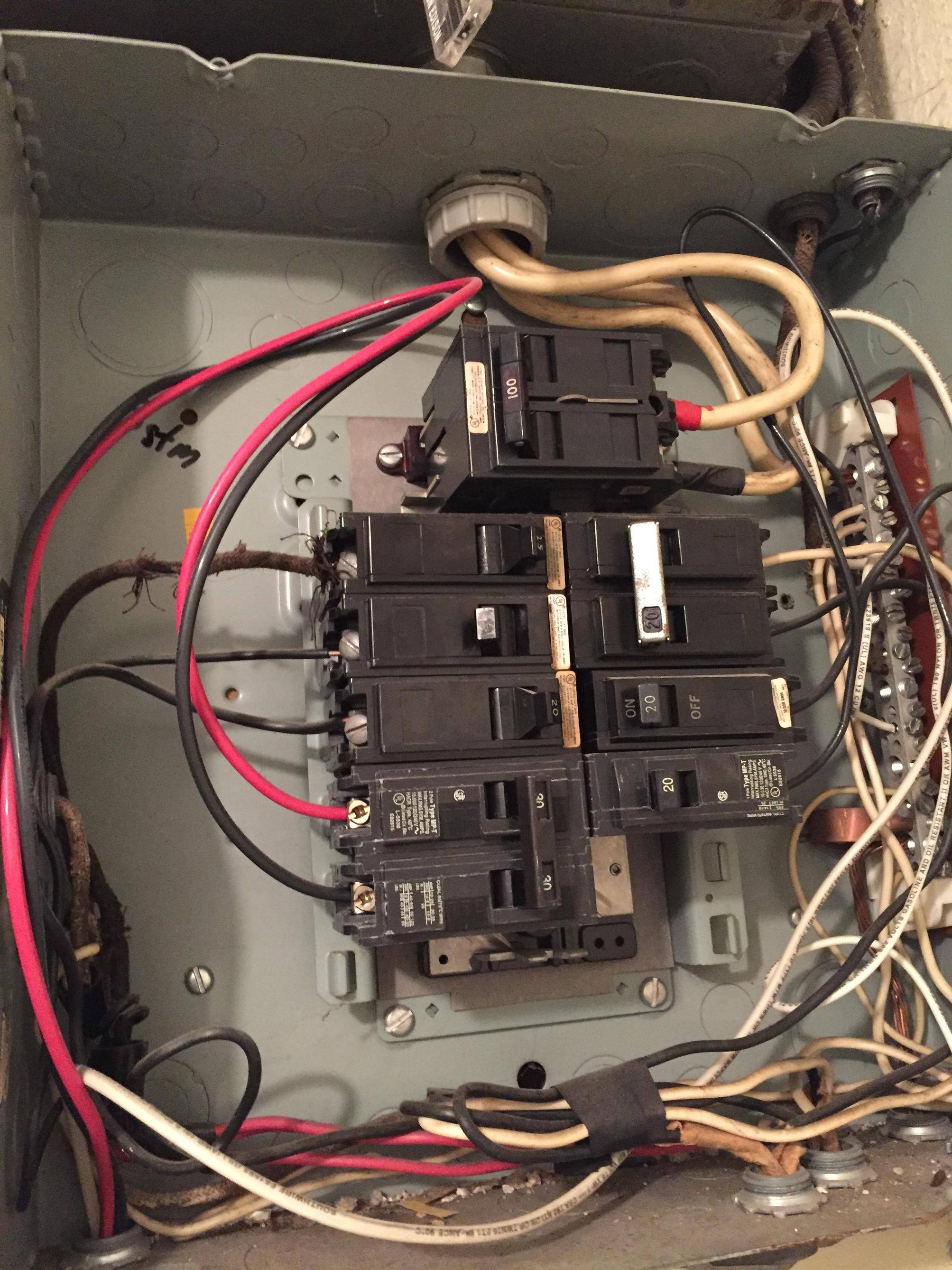 I live in the “basement” apartment of a three family home. I am below street level, but as the house is on a cliff going down to the river, it is not below ground. There is a second basement below it. The house was built in 1905. Bought by current owner in 2004, and renovations on this unit were probably done sometime between 2005 and 2010.

I have lived here for close to three years and have had minimal electrical problems. This summer the utility company has been adding and transferring the electrical wires on the poles in front of the house, as they prepare to provide electric service to a house farther down the cliff, on the river. As they have worked, I have lost power temporarily a few times. They deny that they did any work on the weekend in question.

My question is about a circuit breaker, which had flipped to the “off” position when I returned from a weekend away. The refrigerator was drawing power, and the cable box, but all lights and other appliances were off. The voltage is 240. The 15 Amp breaker resisted being turned back on, it immediately snapped back to the off position again. There was some flashing with an attempt to turn the breaker back on. So far I have not had any believable explanation of how this could have happened.

This one 15 Amp breaker controls four rooms; the bathroom, the living room, one bedroom, and the kitchen. The appliances included the TV, radio, a fan, refrigerator, stove with an electric pilot and overhead lights in the kitchen are on this breaker. Anything not plugged into the wall directly was connected to a safety power strip.

The breaker box is in the unlocked laundry room, which is outside my apartment, and accessible to anyone who walks in there. When all items were unplugged, the breaker could then be turned back on. Plugging all items back in did not trip the circuit, and everything has been fine for two or three weeks now without any indication of a short or overcurrent.

The weekend I was away from Friday afternoon until Sunday at around 10PM. Things in the half-full freezer were defrosted, and I estimate the power was off for at least 12 to 24 hours. My landlord told me that he was at the house and stayed in the apartment below mine the night before. He states that the lower apartment has its own circuit breaker box, totally separate from the one for my apartment.

I am curious to have some ideas on how it could happen that at a time when I was away, and electrical use was low, the circuit tripped. Here are a few points I offer that may or may not play a role in this situation.

The "four rooms on a breaker" and the re-trip with a flash, along with the routine shutoffs owing to rewiring the poles... together completes the picture.

Four rooms is an enormous load for any circuit, especially when one of them is a kitchen. And this is a smaller 15A circuit. And there are "safety power strips"** and as such, I suspect there are also other loads which you did not mention or are unaware of.

In any case, this circuit is certainly maxed out.

It's also possible the fridge is getting old and tired, or even having a ground fault.

So here's what we know. When you reclosed the breaker, you got a flash, "foof" and retrip. And you did it again (bad move), same result.

Certainly it's reasonable to assume that if you manually shut it off, and later turned it back on, it would trip again. Ditto if you shut off the whole panel/house. Ditto if there was a power outage, and not all outages have to do with scheduled work. (This assumes the freezer has warmed up a bit and wants to cycle on: if the freezer is sanguine, it may not trip.)

This is an immediate, big-flash, magnetic mode trip, which only happens at 5 to 10 times a breaker's thermal mode current rating. What would cause that? Inrush current at startup - this is a characteristic of most motors, most lightbulbs, and most power supplies. And this explains why you can power everything up if you start each one at a time. The fridge's current draw is dramatically lower once its motor has spun up, so as long as you introduce each inrush current one at a time, you are OK.

Inrush current is why the breaker's magnetic trip rating is so much higher than its thermal trip rating. A great deal of it is tolerated.

On power restore, everything restarts at once and they are stacking to cause a magnetic trip. This shouldn't happen. Either one appliance is defective and causing an extraordinary startup load, or you just have way too much stuff on this circuit.

Inrush current applies every time an appliance cycles on, e.g. A fridge will turn on and off intermittently as needed. If two big appliances both happen to cycle at the same time, you will get a spurious, unexplained trip.

What you really need is a dedicated circuit for fridge and for freezer. If the landlord is fond of removing the panel deadface, this shouldn't be too much of a challenge for him, I see 3 empty spaces.

Or it may be time to replace an old fridge, or at least its motor's start capacitor.

Figure out which loads are on which breakers, and how much each load realistically draws... and move things around so they are sane. A Kill-a-Watt will tell you what any appliance or power strip draws. Unfortunately I don't onow of a device like that which will tell you about inrush current.

** "safety power strips" are not a thing, by the way. Strips are receptacle splitters, to give you 6 sockets where you had 2. Used well, they can be safe, but all the loads on them together add to the demand on the circuit, so it is exactly the same as if they were plugged in directly. So if the notion is "they let me plug more stuff in", that is only true if all their power draws add up to a sensible number.

As far as safety, they certainly add anything but that, and they are probably the cheapest and most shoddily made part of your entire wiring system (unless they're Tripp-Lite, then nevermind.) Perhaps they mean "as opposed to this other unsafe power strip".

With the 15 AMP breaker immediately shutting off when you try to turn it on - indicates you have a SHORT or overload.

Unplugging everything and then turning back on and things are working - something is not in power on mode when plugged back in. You will need to isolate where that short is or overload is.

I suspect you have an overload 15 AMPS MAX Power Load is about 1800 WATTS !

"This one 15 Amp breaker controls four rooms; the bathroom, the living room, one bedroom, and the kitchen. The appliances included the TV, radio, a fan, refrigerator, stove with an electric pilot and overhead lights in the kitchen are on this breaker."

When your freezer kicks on it draws a lot of current.

As for your neighbors and an unlocked laundry room - is the laundry room shared and if so do you see two power panels - one for you and another for the other apartment ?

Having the panel removed is EXTREMELY SUSPICIOUS! Someone removed it and had reason to remove it, they might have tried to reset your breaker - but could not - as they could not enter your apartment.

1
What is the power consumption of my LG refrigerator?

2
AFCI breaker tripped when there was no power to wire
3
Why does the circuit breaker for my bedroom continue to trip without any visible event after a power loss?
1
What to look at first when when circuit breaker that fridge is on is tripping?
1
Washer & dryer lost power after the main breaker tripped
2
How to add a secondary circuit breaker, limited to cutting a single appliance
0
Circuit Breaker Trip - Identifying Culprit
1
Breakers for living room was working, but has stopped after I turned breaker on/off
0
How can there be voltage but not power in a circuit when no breaker turns it off?
0
Could this have been the cause of power issues I was having?